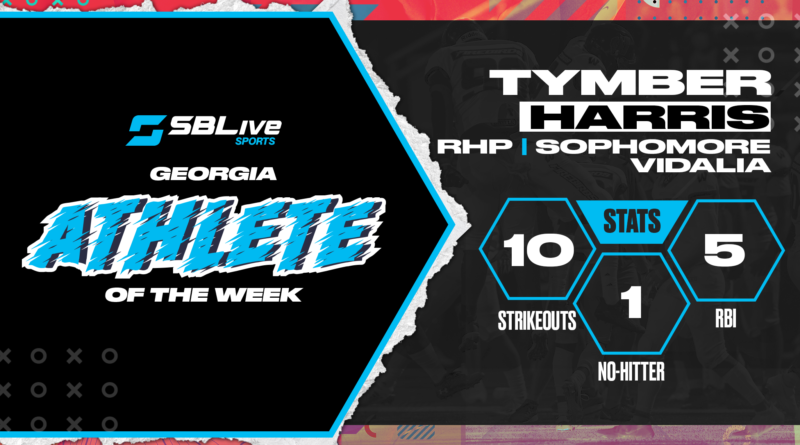 The sophomore was flawless in the circle and at the plate against Swainsboro, pitching a no-hitter with 10 strikeouts while going 3-for-3 at the plate with a home run and five RBIs.

Harris received 45.98% of the vote, beating out Newnan RHP Maddie Veal who finished second with 40.57%. Creekside DB finished third with 8.42% and Milton QB Devin Farrell finished fourth with 3.4%. There were over 37,000 votes tallied this week!

Drew Aucion, North Forsyth QB: Aucion carried the ball 22 times for 161 yards and two touchdowns as he led North Forsyth to a 42-10 win over Dalton.

Sammy Brown, Jefferson RB: Brown touched the ball four times, and three of those touches resulted in touchdowns — one each on offense, defense and special teams — as Jefferson rolled over Southside 45-7.

Shelby Chamblin, Whitewater outside hitter: The junior had a career-high 20 kills along with 21 digs and five blocks in a 3-2 win over East Coweta.

Polly Cummings, Buford setter: Cummings was a master distributor in a straight-set win over Centennial, as the junior passed around a team-high 24 assists.

Dylan Elder, Grayson RB: The sophomore carried 15 times for 127 yards and three touchdowns in a 42-6 win over Alpharetta.

Karley Fuller, Central RHP: The junior pitcher twirled a no-hitter against Ridgeland for the top-ranked softball team in Georgia.

Jeremiah Graham, Dodge County LB: Graham had 10 tackles (six for loss) along with two sacks, including the game-sealing sack in a 30-22 win over West Laurens.

Tyler Hughes, Marietta QB: Hughes was 21-of-27 passing for 348 yards and four touchdowns while adding a rushing score in a 42-21 win over McEachern.

Ricky McCrary, Creekside DB: The sophomore defensive back intercepted a pass from Westlake quarterback RJ Johnson to seal the 27-20 victory for Creekside with nine seconds left in regulation.

MJ Morris, Carrollton QB: Morris, an NC State commit, had four passing touchdowns and one rushing score in a 48-7 win over Jonesboro.

Maddie Veal, Newnan RHP: The sophomore pitcher/slugger did it all in a 13-2 win over Pebblebrook, striking out eight in 3 1/3 innings and driving in three at the plate, including a two-run homer.