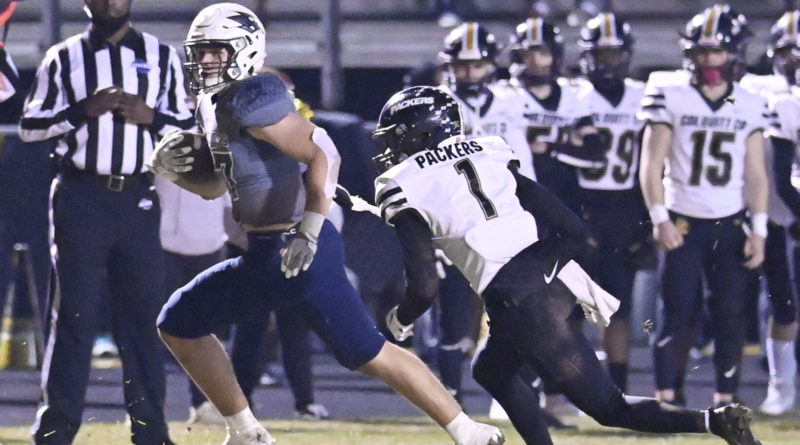 NORCROSS, Ga. — When you’re a high school football player holding the credentials of Norcross’ Lawson Luckie, you’re bound to attract as much attention from opposing defenses as from big-time college football programs.

Sure enough, the Blue Devils’ four opponents thus far in 2021 have made it a point to not allow the consensus four-star tight end prospect to beat them, a situation that comes with some pros and cons.

“He’s got two or three people on top of him, and they’re eyeballing him wherever he goes,” Norcross coach Keith Maloof said about his 6-foot-3, 225-pound junior following Friday night’s game against South Gwinnett at Blue Devil Stadium. “That’s opening up some things in the run game for us a little bit more because people are eyeballing him.”

The good news for Luckie and the Blue Devils is that he came away with the most receptions in a game so far this season Friday night during a 7-0 Norcross win.

His five receptions matched his total from the previous three games.

The bad news is that those five catches went for only 13 yards, giving him just 42 yards on 10 catches through the first four games. A year ago, he hauled in 35 receptions for 389 yards and three touchdowns, earning second-team All-County honors during a season in which Norcross won 13 games and advanced to the Class 7A state semifinals.

And with the Blue Devils having scored just 20 total points in three games since a season-opening 42-20 win over Hillgrove on Aug. 20, Friday’s game only illustrates how important it is for the offense to find some room for Luckie, the only returning offensive starter from last year.

But despite how frustrating the situation may seem during the team’s 2-2 start, Maloof knows the key for Luckie and the Blue Devils is patience.

“His stuff is going to come,” Maloof said. “We’re not going to get too frustrated. I told him to just stay the course, and I promise by the end of the year after 14 or 15 games, or whenever our season ends, he’s going to have the catches and touches that he deserves.”

So far, it seems Luckie has heeded his coach’s advice, as his focus following Friday’s game was celebrating the win with his teammates.

And he hasn’t let his search for room to operate as a receiver affect his blocking, as he remains a cornerstone on an offensive line that is still breaking in five new starters.

“We’ve just got a young team,” said Luckie, who already boasts scholarship offers from more than a dozen Power Five college programs, including Georgia and Georgia Tech. “We’re going to face obstacles. It’s just how we get over them. It’s not going to be smooth sailing at first. But we’re going to get stuff together, and I’m excited to see what we’ve got.

“I take a lot of pride in my blocking. We’re a big running team, and our running opens up the pass. And it’s just one thing I can control.”