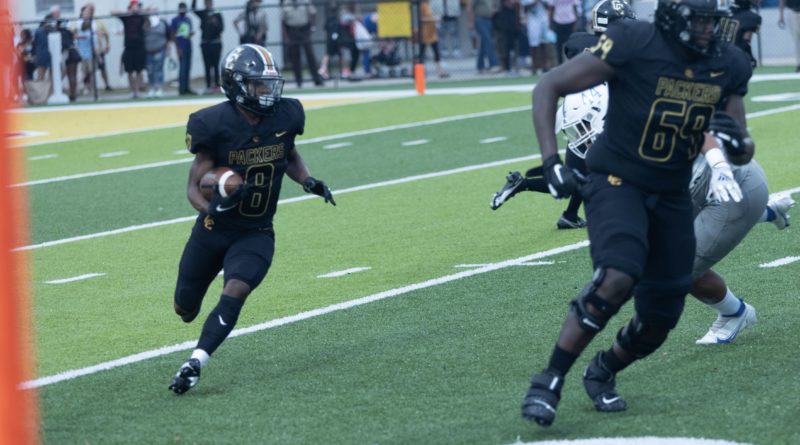 Pictured above is running back Charlie Pace (photo by Ethan Lowe), who helped Colquitt County score a big win Friday night at Valdosta.

Pace rushed for four touchdowns in a 48-42 win over Valdosta. His fourth score was the game-winner.

Swords threw three touchdown passes in a 46-0 shutout of Salem.

White recorded a pick-six in a 17-14 loss to Cartersville.

Lewis threw five touchdown passes in a 56-7 rout of Ridgeland. Calhoun led 42-0 at the half.

Roper threw three touchdown passes and added another on the ground before halftime in a 45-10 win over North Paulding.

Webb scored on a punt return and a kick return in a 42-14 win over Hillgrove.

The sophomore was nearly perfect, going 20-of-23 for 296 yards passing with one touchdown. He also added 67 yards rushing and one touchdown on the ground in a 42-35 win over Flowery Branch.

Soliday threw three touchdown passes and rushed for another in a 63-0 shutout of Wilkinson County.

Hawkins ran the ball 20 times for 301 yards and seven touchdowns in a 70-35 win over Providence Christian.

Carter made a play when his team needed one as he snagged an interception in the end zone to secure Newnan’s 39-32 win over Mary Persons.

The freshman running back rushed for 227 yards and three touchdowns on 26 carries, propelling Lee to a 24-21 win over Lowndes.

Daugherty recovered a fumble and returned it 34 yards for a touchdown as Grayson beat Archer 15-13.

Thomas had three touchdowns, including a 58-yard TD reception and a 92-yard rushing score, as Benedictine beat North Oconee 48-17.

Snead threw two touchdown passes and rushed for an 80-yard score in a 41-13 win over Columbus.

Corrigan rushed for the only two touchdowns of the game in the 14-0 win over Etowah.

Hunter had 10 receptions for 202 yards and a score in a 34-0 win over previously undefeated Rome.