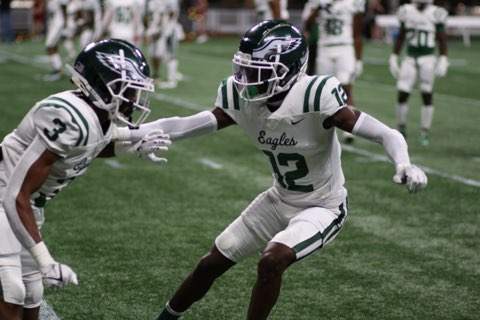 The game of the night was in Cartersville, where the No. 11 Purple Hurricanes outlasted the No. 10 Creekside Seminoles in a back-and-forth chess match.

Meanwhile, Travis Hunter and No. 1 Collins Hill put up another dominant performance with a shutout of No. 22 Rome.

Travis Hunter was a big-play machine on both sides of the ball as Collins Hill fired on all cylinders Friday night against a tough defense.

Buford looked a little rusty in the first quarter off a bye week, but the Wolves gained momentum as the game went on.

Lee County eased up on its offensive output after combining for 134 points in two weeks, but the Trojans held on for a 24-21 win over Lowndes after racing to a 17-0 lead after one quarter.

Walton looked in command in the first quarter, but then West Forsyth’s Peyton Streko took over, rushing for 252 yards and six touchdowns.

North Cobb raced to a 36-0 halftime lead and then put it on cruise control.

Grayson hung on in a defensive slugfest, but the scary part of the game came when Archer defensive back Caleb Wooden (Auburn commit) had to be carted off with an injury in the fourth quarter.

Idle. Next week at West Forsyth.

Northside broke a long scoreless streak against Warner Robins, which cruised to victory.

Creekside nearly made it three marquee wins to start the season, but Cartersville grabbed a late touchdown.

The Purple Hurricanes remain unbeaten on the season with a tenacious home win over Creekside.

Colquitt County lean on sophomore quarterback Nico Fann in a rivalry game that came down to the wire.

Lowndes put up a fight after falling behind early, but the Vikings suffered their second loss of the season.

Idle. Next week at Dalton.

Evans hung on for its second straight close win to remain undefeated.

Idle. Next week vs. Mays.

Jefferson continued to roll through its opponents with a dominant performance on the ground.

East Coweta continues to look like one of the best defensive units in the state.

Valdosta bounced back from a COVID-19-related forfeit to play a great game against Colquitt County, but the Wildcats fell just short.

Fitzgerald started the scoring with a safety, and its defense was the difference throughout.

Rome couldn’t get anything going against the top team in the state.

Idle. Next week at Mundy’s Mill.

Marist started the scoring with a pick-six and then cruised from there.