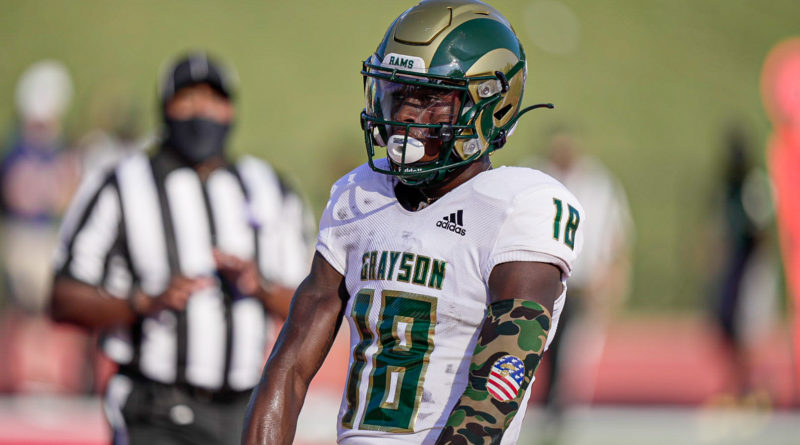 Collins Hill finished off the Freedom Bowl with a 37-22 win over a top team from Mississippi to hang on to the top spot, while Creekside scored a thrilling win over Westside to ascend into the Top 10.

Milton made a big move with its own out-of-state win in the Freedom Bowl, and Grayson (photo above by Josh Major) is starting to look sharp.

Collins Hill remains at No. 1 after beating Greenville Christian (MS) 37-22 on Friday in the Freedom Bowl finale.

Buford holds steady at No. 2 after a bye Week 3.

Walton advanced to 3-0 without even stepping on the field in Week 3. Brookwood was forced to forfeit the game after six players tested positive for COVID-19.

North Cobb had a bye in Week 3 and will face Alpharetta at home on Friday.

Milton bounced back after a tough loss to North Cobb in Week 2, beating one of the top-ranked teams in Virginia, Life Christian Academy, 34-14.

Warner Robins had a bye in Week 3 will face Northside in a region game at home Friday.

Creekside shoots up to the Top 10 after an impressive 27-20 win over former No. 10 Westlake.

Cartersville’s offense found its rhythm early and only became more productive in the second half, scoring three touchdowns in the third quarter alone in a 42-14 win over Alexander.

Colquitt County bounced back from a hard-fought Week 2 loss to Westlake by beating Cedar Grove 28-19.

Lowndes hosted Lake Gibson (FL) in a shootout that ended in a 58-47 Lowndes victory. The teams were tied 44-44 late before Lowndes pulled away.

Carrollton is still undefeated after its offense went off against Jonesboro, securing a 48-7 win.

Langston Hughes got its first real win of the year (the first was due to an Allatoona forfeit) and did it convincingly, beating Harrison 38-14.

Evans narrowly escaped Harlem with a 22-20 win on the road to remain undefeated.

Westlake fell to Creekside 27-20, recording its first loss of the year in one of the best games of Week 3.

Jefferson has been dominant in all three of its games this season, racking up 109 points while giving up only 20.

East Coweta shut out former No. 17 Norcross 24-0 at home in Week 3 to remain undefeated.

Valdosta was forced to forfeit its game vs. Bainbridge due to COVID-19 health and safety protocols.

Fitzgerald remains undefeated after a dominant 35-12 victory on the road at Turner County.

Rome picked up its second win of the year, beating Cherokee 27-7.

Woodward Academy will head into its Week 4 bye undefeated after beating Marist 14-9.

Rabun was forced to cancel its game vs. Eagles Landing Christian Academy on Sept. 3 and vs. Walhalla (SC) on Sept. 10 due to COVID-19 protocols. However, the team will head to North Carolina on Friday to take on defending state champion Murphy in a game replacing Walhalla’s cancellation.