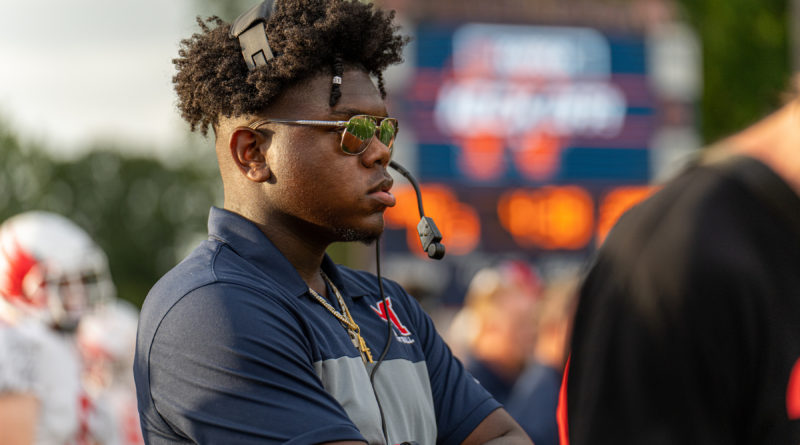 MILTON, Ga. — Beware, offensive linemen and quarterbacks. After missing the first three weeks of the 2021 season due to an injury, Georgia’s leading pass rusher from a season ago says he is ready for action.

Milton junior Lebbeus “L.T.” Overton said he’s feeling better, and doctors gave him the green light to get back on the field and back to terrorizing quarterbacks.

As if the thought of his return isn’t scary enough for opposing teams, the version of Overton that takes the field this year will be one year stronger and wiser than before.

Milton coach Adam Clack said he thought every player on the team was capable of taking a big step this past offseason. Well, almost every player. Clack didn’t find it realistic for Overton to improve that much considering how talented he already was. He thought wrong.

“He’s just getting smarter, Clack said. “He’s contributing on both sides of the ball. His leadership skills. As you see he’s walking around in a coach’s shirt being engaged. It’s really easy for him to sit back and pout and sulk and play the victim. Nobody would blame him. He’s done the opposite. He continues to pour into this team. He poured into his rehab.”

When Milton travels up to Philadelphia for a Sept. 11 matchup with St. Joseph’s Prep, the No. 19 team in SBLive’s Power 25, the Eagles can expect to have Overton in a jersey and helmet rather than a collared shirt and headset. He should provide a larger-than-life boost to an already immensely talented Milton team, one that many media members pegged as their preseason No. 1-ranked team in Class 7A.

Overton moved from Alabama to Georgia halfway through his freshman year and wasted no time establishing himself in the Peach State. He started at center for Milton’s varsity basketball team, which finished 26-5 and made it to the Class 7A state semifinals.

Just before the start of his sophomore year in 2020, Overton was named the No. 1 overall football recruit in the Class of 2023. It was an honor, of course, but the ranking also put a target on his back. The eyes and expectations on the newcomer didn’t faze him. If anything, they helped fuel him.

Overton finished his first football season in Georgia with a state-high 21.5 sacks in 12 games. Coaches from Milton’s region named the sophomore the region’s player of the year, and he made numerous All-State and All-American teams.

“He played last year with something to prove, and he proved it,” Clack said.

As soon as football season ended, Overton returned to Milton’s basketball team and went to work. He averaged a double-double on the year, as the Eagles went 28-3 and won a state title in March.

Following the school year, Overton was crowned the 2020 male high school athlete of the year by MaxPreps, an award that usually goes to upperclassmen. Previous winners include Derrick Henry, Patrick Mahomes and Kyler Murray. It had been a decade since Hillcrest High School (MO) sophomore Dorial Green-Beckham pulled off the feat. Green-Beckham went on to attend the University of Missouri before playing in the NFL.

Overton can attend whichever college or university he wants when the time comes. Every team in the country — from Alabama (offered) to Florida A&M (offered) to South Dakota (not offered) — is either actively seeking his commitment or would take him without hesitation.

On Aug. 25, Overton released a list of his top 12 schools, which is a who’s who of college football programs.

Sept. 1 marked another important date in Overton’s recruitment process, as college coaches were officially allowed to start contacting him. Up until that point, Overton had to initiate any conversations with coaches.

“It’s been crazy,” Overton said. “(Coaches) have been blowing my phone up. I’m just taking my time and responding at a slow pace.”

Following Milton’s win over Life Christian (VA) in the Freedom Bowl, Overton visited Charlotte, North Carolina, to attend the biggest college football game of the weekend: No. 3 Clemson against No. 5 Georgia.

The game gave Overton a chance to see two of his top 12 schools play each other, but it won’t be the last college game he takes in before the end of the season. He’ll have a jam-packed schedule this fall with school, football and recruitment, which now entails a heavy dose of talking with coaches and taking visits to campuses. If all goes well, Overton said he might be committed somewhere by the time he’s a senior.

“I’ll probably end up deciding this year after I take those official visits and continue building relationships,” he said.

Until then, look for Overton to continue putting up big numbers and taking home amazing accolades. And quarterbacks and offensive linemen, remember the first word of this story when going up against Overton.