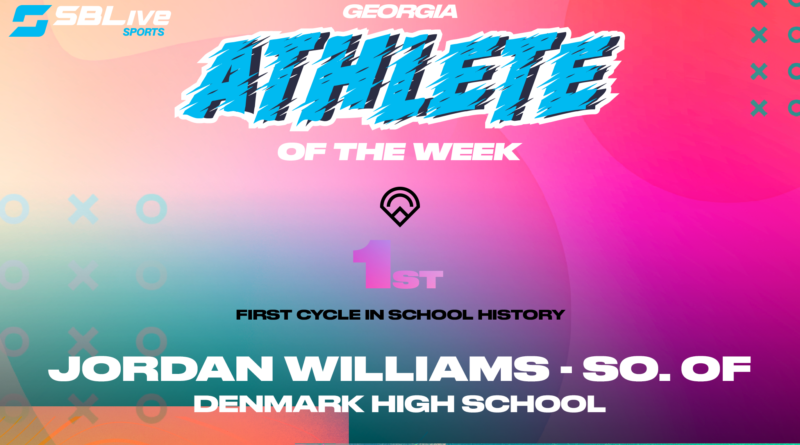 Congratulations to Denmark outfielder Jordan Williams for being voted SBLive’s Georgia High School Athlete of the Week for Aug. 23-29!

The sophomore recorded the first cycle (single, double, triple, homer, plus another double) in the history of Denmark softball in Game 2 of a doubleheader sweep vs. Forsyth Central.

Williams received 56.94% of the vote, beating out Houston RB Simeon Askew who finished second with 41.49%.

Simeon Askew, Houston RB: Askew rushed for 244 yards and two touchdowns in a 27-24 win over Crisp.

Evan Dickens, Blessed Trinity ATH: Dickens scored on both offense and defense as he returned an interception 40 yards for a touchdown and broke free for an 80-yard rushing touchdown in a 28-13 loss to Marist.

Holden Geriner, Benedictine QB: Geriner was 25-of-38 passing for 221 yards and three touchdowns in a 42-27 loss to Christopher Columbus (FL).

Ryley Kutter, Wesleyan RHP: Kutter accounted for six strikeouts and was 2-for-3 with a double and three RBIs in a 15-0 win over Providence Christian.

Thalia Martin, Brookwood 3B: When the pressure was on, Martin delivered, as she hit the go-ahead home run to cap off Brookwood’s 7-6 comeback victory over rival Parkview. Martin was 2-for-3 on the day.

Marisa Miller, North Gwinnett C: Miller reached the 100-RBI mark for her career in a 13-1 win over Collins Hill.

Charlie Pace, Colquitt RB: Pace had 20 carries for 163 rushing yards, a rushing touchdown and one receiving touchdown in a 31-24 loss to Westlake.

Jakorrian Paulk, Fitzgerald RB: Paulk tossed the ball behind his head to Drew Moore and converted a two-point conversion in an 18-15 win over Irwin County, the previous No. 1 team in Class A Public.