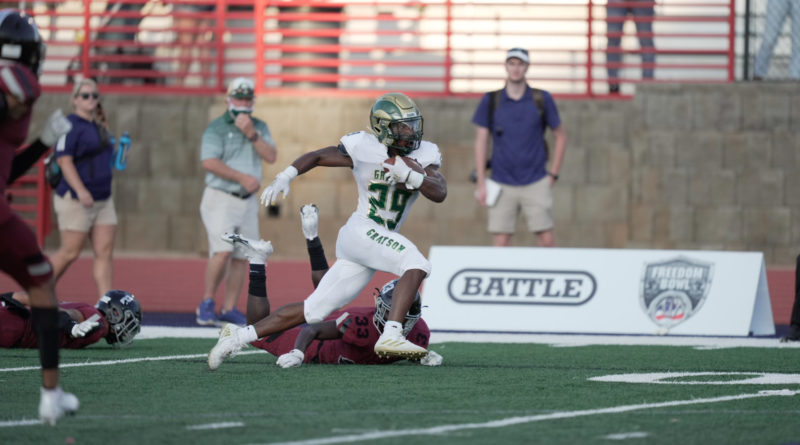 In the featured photo above by Josh Major, Grayson sophomore running back Dylan Elder takes off against Alpharetta.

The sophomore scored three touchdowns in a 42-6 win over Alpharetta.

Newman threw a 27-yard touchdown pass that cut Evans’ lead to 22-20 with 6:29 remaining. Harlem would have taken the lead if not for an unsuccessful field goal.

Hughes was 21-of-27 passing for 348 yards and four touchdowns while adding a rushing score in a 42-21 win over McEachern.

Mathis finished the win over McEachern with nine receptions for 140 yards and two touchdown receptions.

Houck was 17-of-32 passing for 302 yards and three touchdowns in the loss to North Gwinnett.

The sophomore defensive back intercepted a pass from Westlake quarterback RJ Johnson to seal the 27-20 victory for Creekside with nine seconds left in regulation.

Brown touched the ball four times, and three of those touches resulted in touchdowns as Jefferson rolled over Southside 45-7.

Locke came through for his team with a clutch fourth-down sack to seal a victory as Christian Heritage led King’s Ridge 34-32.

Fleming was the first player to score in the Stephens vs. Jackson game as he pulled off a 40-yard pick-six.

Jefferson held Southside’s offense to minus-31 yards as it cruised to a 45-7 win.

Mulligan led White County to its first win of the season as he ran for two touchdowns, including one with under six minutes left in the game to seal the win.

Morris had four passing touchdowns and one rushing score in a 48-7 win over Jonesboro.

Riley played both ways and put the Mustangs back in the lead after a 56-yard rushing touchdown with four minutes left in the game.

Downs set a Mill Creek school record with his fourth career pick-six in a 35-7 win over Dacula.

Aucion carried the ball 22 times for 161 yards and two touchdowns as he led North Forsyth to a 42-10 win over Dalton.