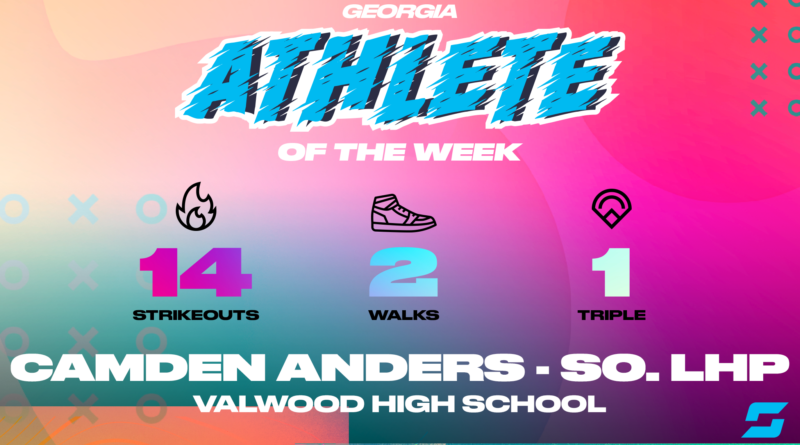 Congratulations to Valwood softball pitcher Camden Anders for being voted SBLive’s Georgia High School Athlete of the Week for Aug. 16-22!

The sophomore left-hander recorded 14 strikeouts last week against Citizen Christian Academy in Valwood’s home opener. She was also 1-for-2 with two walks and a triple.

Anders ran away with this week’s honor, receiving 77.85% of the total vote.

Here are the other athletes who were nominated for Aug. 16-22:

Jacurri Brown, Lowndes QB: Brown went 10-of-18 for 163 yards and three touchdowns through the air. On the ground, he rushed for 153 yards and one score. He was the game’s leading passer and rusher in the Vikings’ 34-28 overtime loss to Walton.

Trace Butcher, Mill Creek K: Butcher knocked two field goals through the uprights, including a 56-yard bomb in the 43-10 win over Parkview.

Patrick Campbell, Brookwood DB: His team came up short in its season opener against an electric Collins Hill team, but Campbell locked his receivers down and intercepted two passes.

Ty’Jon Cash, McEachern DE: Cash recorded 8.5 total tackles — including seven solo tackles and two tackles for a loss — and one sack in a 53-20 rout of Kell.

Maris Hopper, Colquitt RHP: Hopper allowed only one batter to get a hit past the infield in the Lady Packers’ 12-0 run-rule win over Coffee County.

Travis Hunter, Collins Hill WR/DB: Hunter caught two touchdown passes and racked up 232 yards receiving vs. Brookwood. On defense, he snagged the team’s only interception of the night.

Barry Manning, Tucker WR: Manning caught only three passes in Tucker’s loss to Dacula, but he was productive with the ball in his hands as he finished with 99 yards receiving and a score.

Julius McClennan, Lee County RB: McClennan rushed for 119 yards in the 25-22 win against Carver Columbus and ran in a two-point conversion.

Steven Nahmias, Marist OT/DT: In Week 1, Nahmias became a four-year starter for Marist on the offensive line, which is very rare there. Marist has had only three others who played as freshmen in the past 46 years.

Malachi Singleton, North Cobb QB: Singleton completed 19 of 30 passes for 218 yards and three touchdowns while rushing for 91 yards and a score vs. Buford.