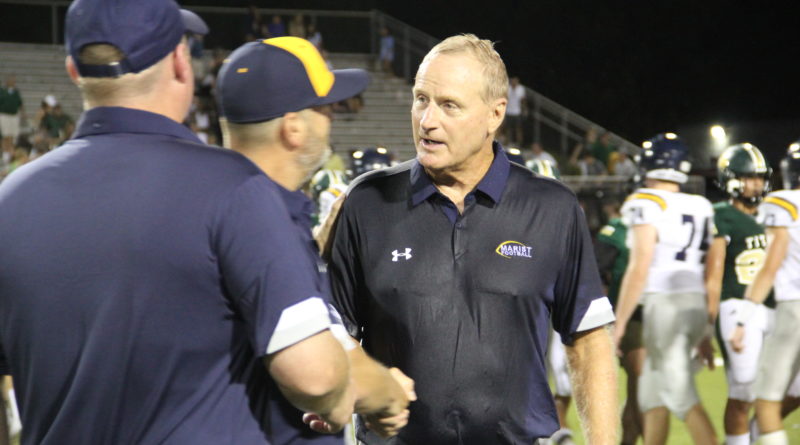 Story and photos by Zach Shugan

ROSWELL, Ga. — For Alan Chadwick and those who hold Marist football dear to their hearts, Friday night was one they will never forget.

Marist went to Roswell for its 2021 season opener and won 28-13 over its rival and Class 5A’s No. 1-ranked team, Blessed Trinity. That wasn’t the only cause for celebration, though. With multiple family members in attendance, including his daughter who surprised him by coming from Colorado, the longtime Marist head coach Chadwick earned his 400th career win.

“This is special,” Chadwick said after the game. “For it to work out this way is really kind of neat.”

All 400 wins came at Marist, where Chadwick has been the head coach since 1985. He joins the retired Larry Campbell (477 wins) as the only head coaches in Georgia history to reach the 400-win mark.

Win No. 400 didn’t come easy for Chadwick. The defending Class 4A state champions were forced to punt on their first three drives of the game and threw a pick-six on their fourth, falling behind 7-0.

Marist’s offense overcame the slow start and scored 28 unanswered points in less than two quarters to put away Blessed Trinity. The War Eagles’ defense held the Titans to less than 200 yards of total offense on the night, with 80 yards coming on a touchdown run in the fourth quarter.

“I’m just super proud of our players and the coaches,” Chadwick said. “We looked really bad early in the game with a lot of mistakes. We were nervous. We’re a young team.”

Chadwick said the players didn’t bring up the subject of his 400th win in the leadup to Friday’s game against Blessed Trinity.

“I don’t think that was really first on their mind. First and foremost, they wanted to beat Blessed Trinity because they’re a good football team, and these two Catholic schools go at it pretty good. It’s pretty intense.”

Maybe the players were so focused on defeating their rival that they forgot about the milestone for Chadwick. Perhaps they were fully aware but purposefully ignored the subject and treated their head coach like a baseball team treats a pitcher throwing a no-hitter.

But once Marist quarterback Champ Davis took a knee to run out the clock and officially give Chadwick his 400th win, the coach — and seemingly all the War Eagles’ players, coaches and fans in attendance — celebrated the historic accomplishment.

Seniors Steven Nahmias and Andrew Mannelly, who scored one touchdown each on the night, soaked Chadwick in a Powerade bath before the team ran on the field in glee. Once the teams finished shaking hands, Chadwick made his way back to the Marist sideline, where he took pictures with family.

It wasn’t just those in attendance congratulating the longtime Marist head coach. Now in his 37th season leading the War Eagles, Chadwick could fill a small town with his former players. Some of them reached out to him before the game Friday night to wish him good luck, he said, and he’s surely received plenty more over the weekend.

While Chadwick acknowledged and celebrated the momentous occasion, he is still a coach at heart, and Marist still has a full season ahead of itself.

Non-region opponents for Marist include Class 5A’s Woodward Academy (Sept. 3) and Class 7A’s Harrison (Sept. 24), as well as Florida’s The Bolles School (Oct. 8). Luckily for the War Eagles, all three games will be played on their home turf.