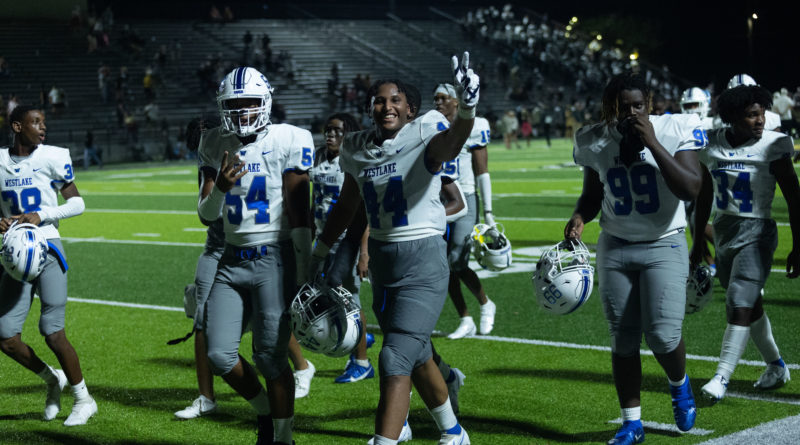 MOULTRIE, Ga. — Westlake traveled south Friday to Colquitt County in a game that lived up to the hype, as coach Bobby May’s Lions scored a monumental win for the program.

Westlake quarterback RJ Johnson ran in the game-winning touchdown from 8 yards out with 4:11 left in the fourth quarter to give the Lions a 31-24 victory.

“We owe this win to our grit,” May said. “Teams in the past that we’ve coached would’ve quit when we were down. We’ve got fight to us, and I think this group is different than groups we’ve had in the past. We put it on the line for the guy next to us.”

Westlake’s defense was responsible for switching the game’s momentum in its favor, especially a pick-six by sophomore defensive back Christian Peterson, but Johnson was the one to seal the win.

Colquitt County has to wonder what could have been if the Packers had taken better care of the ball.

“We had four turnovers. We’ve got to do better there,” Colquitt County coach Justin Rogers said. “It’s hard to win a ballgame with that many turnovers.”

After a slow first half, Colquitt County’s offense, led by sophomore quarterback Neko Fann, came alive in the third quarter as the Packers took a 21-10 lead.

Colquitt running back Charlie Pace carried the ball 20 times for 163 yards and a touchdown.

It looked like Colquitt might run away with the game as the offense found its rhythm, but Westlake wasn’t done.

Lions running back Joshua Taylor ran a score in after the offense advanced into the red zone to make the score 21-17.

On Colquitt’s next drive, with 52 seconds left in the third quarter, Westlake’s Christian Peterson stripped the ball out of a Colquitt rusher’s hands and returned it for a score to put Westlake (2-0) up 24-21.

Colquitt’s Brett Fitzgerald kicked a field goal to tie it up, but that would be the last time Colquitt (1-1) put points on the board.

Rogers said he’s happy with how his young quarterback is developing.

“He’s playing well. He’s going to be fine,” Rogers said. “He’s going to get better every game. We just have to do a better job at getting started faster. We’ve had some good third quarters, but we’ve got to do better in the first quarter.”