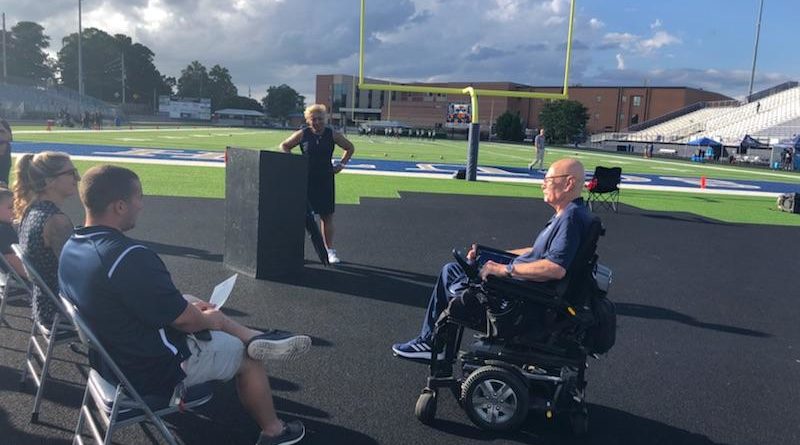 Story and photos by David Friedlander

SNELLVILLE, Ga. – South Gwinnett’s 2021 home opener against Lithonia on Friday night was equal parts about the past, present and future.

The past came from the dedication of the renaming of the press box at Richard Snell Community Stadium for longtime public address announcer Jim Rhodes.

The present and the future were both represented in mostly satisfying fashion in the Comets’ 20-8 victory.

In the present, it gave Bryan Lamar his first victory since becoming South’s head coach in the offseason.

As for the future, the win showed plenty of positives, from the Comets’ ability to bounce back from last week’s season-opening loss at North Paulding, and just as importantly, progress in two particular areas that Lamar hopes will be a key in more victories this fall.

“It’s a growing process for us,” said Lamar, who came to South after posting an 84-30 record at DeKalb County power Tucker the past 10 seasons. “We want to establish coaching and establish our identity. We want to be physical running the football. … That’s what we’re going to focus on doing.

“We’ve got to be great on defense and special teams. So our focus (Friday) night was to stop the run, keep the ball in front of us in passing situations and then establish our running game.”

The Comets (1-1) were strong in both areas Friday, with the trio of Jayshawn Appling, Mekhi Phillips and Nathaniel Miller combining for 201 yards on the ground, with Phillips scoring two touchdowns.

Meanwhile, the defense allowed no points to the Lithonia offense and hounded the visiting Bulldogs (0-2) all night, led by Jayqunn Billingsley and Exzavier McDowell, who posted a sack and a half each, with McDowell also returning an interception for a score.

Of course, there are also areas in which Lamar knows his team must improve upon.

Among those were three turnovers – the first of which wound up as Lithonia’s only score on Josiah Petersen’s 71-yard scoop and score and an 8-0 Bulldogs lead following Darius Sanders’ two-point conversion with 5:17 left in the first quarter – and 13 penalties for 105 yards, part of a penalty-filled game that included 30 combined flags by the two teams.

But South answered on its next possession with a long drive that consumed nearly the rest of the opening quarter before Phillips (11 carries, 70 yards, two touchdowns) powered in from a yard out to cut the deficit to 8-6 with 2.3 seconds left.

That score ignited a run of 20 straight points that included Phillips’ second TD run of the night from 12 yards out at the 7:55 mark of the second quarter and McDowell’s 65-yard pick-six with 3:29 left in the half to give the Comets the lead for good.

It seemed a fitting tribute on a night in which the school honored Rhodes, who has been a fixture at Richard Snell Community Stadium since 1976, when he began public address duties for South football.

And he’s rarely missed a game since despite some serious health challenges, including an automobile accident in 1988 that left him confined to a wheelchair to an injury and infection that led to the amputation of his left leg two years ago.

“It’s very special,” said the 73-year-old Rhodes, who has also handled public address announcing for South baseball, basketball and softball over the years, and also has the press box at the school’s baseball stadium named after him. “I don’t know how much I contributed to (the stadium and the program). … To have your name on a (stadium at a) high school you didn’t even attend – my son did and played ball here – it’s pretty special. It means quite a bit.

“There it is up there on the press box in bright blue letters. It’s quite special. Of course, I broke up a little bit down there (during the ceremony). But … it’s going to be up there as long as this press box lasts, and that’s good to know.”