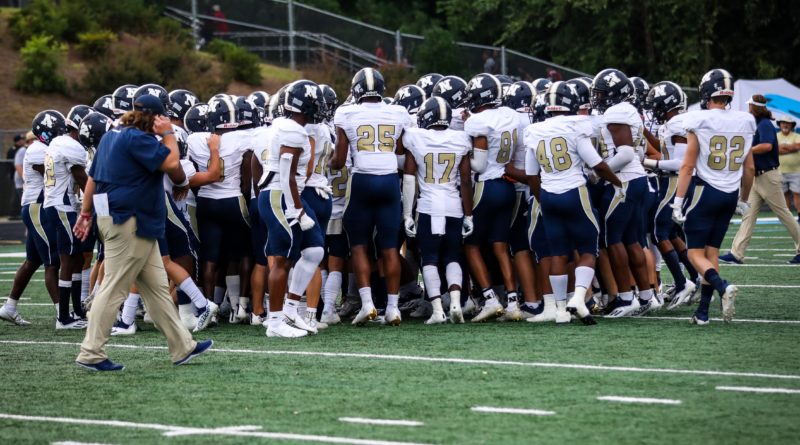 Week 1 of the high school football season included No. 1 Collins Hill putting on an offensive display against Brookwood, and Week 2 was loaded again with some excellent matchups.

Newnan, above (photo by Covey Jones), had to cancel its scheduled game against Carrollton because of COVID-19. Carrollton instead played Johns Creek and won 41-28.

The most monumental win of the night came when No. 23 Marist beat Blessed Trinity to give coach Alan Chadwick his 400th career victory.

Here how the SBLive’s Top 25 fared in Week 2 on a lightning-filled night in Georgia.

Sprayberry canceled its first two games of the season because of COVID-19 concerns.

It started so well for Norcross, which scored first on a fumble recovery and return for a touchdown, but a woeful second half did the Blue Devils in.

Milton was missing star defender Lebbeus Overton, the No. 1-ranked junior in the country, and it showed.

River Ridge raced to a 21-0 lead after one quarter and never looked back against Woodstock.

A defensive battle ended with Jake Pope’s interception return for a touchdown to seal the win for Buford.

Grayson rebounds from its Week 1 loss to Creekside with a lightning-delayed victory over McEachern.

Lee County improves to 2-0 in one of the few quick games on the night.

Pope hung tough for a half, but Walton’s strong third quarter was the difference.

After a tight first half with not a lot of scoring, both teams piled on the points in the second half of a seesaw battle.

Jacurri Brown and Lowndes bounced back from a tough overtime loss in Week 1 with a hard-fought win over Griffin.

Lightning forced the cancellation of Langston Hughes’ game at Allatoona.

In the most severely-weather-delayed game of the night (not counting cancellations), Warner Robins prevails in a shootout.

After quickly finding a new opponent after Newnan had to cancel, Carrollton handled Johns Creek at home.

After falling behind 6-0, Evans storms back behind Kaleb Jackson’s three touchdowns (two running, one passing).

Westlake sophomore Christian Peterson’s pick-six was the play of the game as the Lions earned their first-ever win in south Georgia.

Valdosta improves to 1-1 with a dominant performance.

After taking a 46-0 halftime lead, the night turned musical at Starr’s Mill.