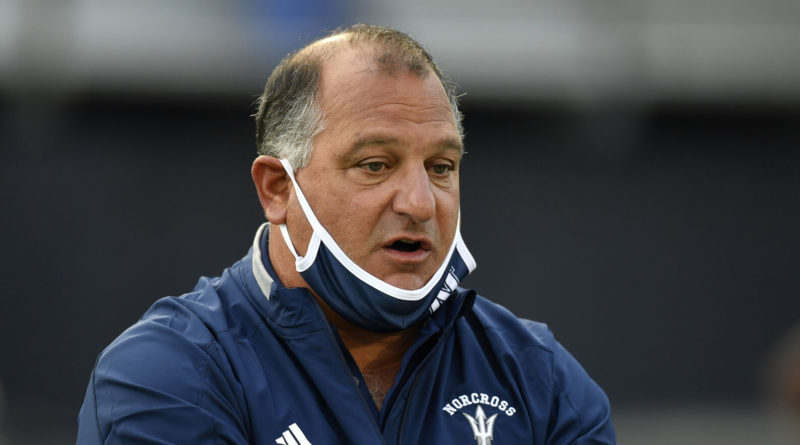 There were plenty of encouraging signs for the upcoming season in the Blue Devils’ 42-30 victory at Blue Devil Stadium, including plenty of pluses (42 points) and total yards (468), and areas for concern for a young team to work on, such as 12 penalties for 104 yards and several early snapping mishaps in special teams.

But what it lacked in aesthetic qualities at times, it more than made up for historical significance by marking a milestone win for Norcross head coach Keith Maloof.

With the win, Maloof, in his 26th season overall and 23rd at the Gwinnett County powerhouse, became the 64th head coach in Georgia High School Association history to reach 200 wins for his career.

The accolade is the latest in a long line of them for the Maloof family, including his older brother Kevin, who won 175 games in 26 seasons at Loganville, Meadowcreek and Dacula, and father George, who won 158 games and a state championship in 26 years at St. Pius X in nearby DeKalb County.

“Obviously over the course of 26 years of head coaching, and the first 11 with Kevin, there’s a lot of special memories in everything that we’ve done,” said Maloof, who spent three seasons as head coach at Tucker High School in DeKalb County and 11 seasons as an assistant to Kevin before taking the Norcross job in 1996. “Great players, great coaches. It’s not the guy at the top, it’s the guy he surrounds himself with. I know that’s a cliché, but it’s a lot of people doing a lot of great things, and a lot of young men buying into what we’ve wanted to do over the course of a career.”

There were a lot of ways on display Friday indicating how well this year’s Blue Devils have bought into what Maloof and his staff are selling despite having almost an entirely new starting lineup on offense from last year’s Class 7A state semifinalist team.

Christian Williams ran 17 times for 172 yards and a touchdown, while Latavius Johnson added 89 yards and a score on just five carries, and Javan Brown completed 11 of 21 passes for 185 yards and two TDs with an interception, including four completions to Tyson Jarrell and a score.

But Norcross (1-0) also had trouble getting out of its own way at times.

The Blue Devils were flagged for nine penalties worth 79 yards in the first half, and had two long snaps on punts that led to disaster.

The first was scooped up by Jaden Jenkins for a 30-yard touchdown with 50 seconds left in the first quarter, while the second gave Hillgrove (0-1) prime field position again, this time resulting in Zack Wieder’s 34-yard field goal that gave the Hawks a 10-7 lead with 9:55 left in the first half.

And yes, a few ill-timed defensive breakdowns and a turnover allowed Hillgrove to cut an 18-point deficit late in the third quarter to just 28-23 with 10:58 remaining.

Still, the Blue Devils managed to gather themselves to finally pull away and leave Maloof and his staff with the best of both worlds – a win, along with a reminder to his young players that there are plenty of areas for them to work on and improve upon.

“We’re a relatively young team, as you saw,” Maloof said. “We’ve got a lot to clean up on special teams and things like that. That’s what happens when we didn’t get a scrimmage. Hopefully next week, we’ll get that much better.”

As much as Maloof preferred to focus on the present and the future of his current team leading up to and during Friday’s game, he didn’t mind taking a minute to reflect on his coaching milestone shortly after being presented with the game ball by his team and Norcross athletic director Kirk Barton following the final buzzer.

“We didn’t talk about (the milestone) in practice this week,” Maloof said. “I don’t even know if they knew about until end of the night because I didn’t want to make it about that. I wanted to make it about them and getting better … because it’s their football team.

“We’ve had a lot of good teams and a lot of support (over the years). My wife (Lisa), you don’t do it without somebody behind the scenes. I don’t think she’s missed maybe two or three games in 26 years. I wouldn’t have been able to accomplish the 200 without her support and the family’s support. It takes everybody. It’s not just me, it’s everybody.”