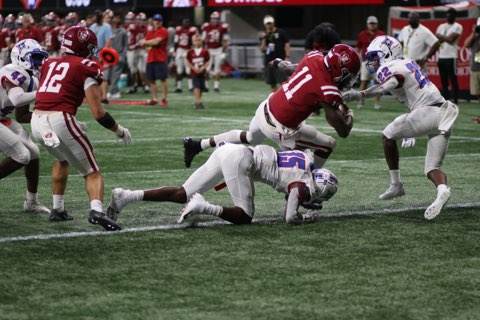 Two late scores and a recovered onside kick helped Lowndes tie the game at 28-28 as the regulation clock expired at Mercedes-Benz Stadium.

However, after electing to receive the ball to begin overtime, the Vikings failed to score and the Raiders capitalized with a game-winning rushing touchdown from running back Sutton Smith to make it a 34-28 final.

Smith finished with 14 carries for 98 yards and two touchdowns, and he added another 31-yard TD reception.

“I learned that we won’t quit, and we won’t give up,” said Brown, who threw three touchdown passes and ran for another in leading the comeback attempt. “This team right here is young, and we don’t have a lot of experience, but these guys aren’t going to quit. We’re hard-nosed.”

On the opening drive, Walton showed it could move the ball on offense as Smith capped off a 50-yard drive with a rushing touchdown.

Once Walton’s offense hit the field again after a Lowndes punt, the Raiders were right back on the sidelines after a single play.

Walton quarterback Jeremy Hecklinski needed only one snap to launch a 62-yard pass that wide receiver Mustafa Hefner hauled in for a score. Hefner led the team in receiving, with two catches for 59 yards.

Lowndes would fail to reach the end zone once again, but the Vikings’ defense started to come alive when Hecklinski was sacked by WC Fulton on third and 18 and Walton was forced to punt.

“You’ve gotta take your hats off to our defense, but we have to score more on offense,” Lowndes coach Jamey Dubose said.

Lowndes’ offense found its rhythm in the second quarter.

Brown ran for a big gain, getting the ball to the 4-yard line, and then on a read option he bulldozed into the end zone to make it 14-7 Walton.

The Vikings got a chance to tie the game up right before halftime, but a penalty halted their momentum, and then kicker Franklin Aguilar missed a field goal.

Lowndes started the second half hot.

Running back Jacarre Fleming broke free for a big run that got the ball down to the 8-yard line, and Brown threw a touchdown pass to running back Chase Belcher to make the score 14-14.

Quarterback Zak Rozsman relieved Hecklinski for Walton and came up big in the fourth quarter.

Rozsman threw three touchdown passes in a row during one offensive drive. Two were called back, but the third was a penalty-free 31-yard touchdown pass in the back of the end zone to Smith.

After a few scoreless drives from both teams’ offenses, Rozsman ran for a 31-yard score to give Walton a 28-14 lead with 1:59 left to go in the game. He finished with 121 yards on 6-for-7 passing with two touchdowns, plus nine carries for 52 yards and a touchdown.

Lowndes answered with a 13-yard Brown touchdown pass to Belcher, but the Vikings’ comeback odds looked long, as only 25 seconds remained.

Lowndes recovered the ensuing onside kick when wide receiver Khris Thomas leaped up between two Walton players and snagged the ball out of the air.

Seconds later, Thomas hauled in a long pass that got the ball to the 3-yard line, and Brown threw another touchdown to Belcher, who tapped his toes in the back of the end zone to tie the game 28-28 as time expired.

Once in overtime, the Vikings’ opening drive ended with a missed 30-yard field goal, and then Smith found the end zone for Walton to seal the upset.

“We saw that we’ll fight. We’ll fight till the end,” Dubose said. “We’re young, I’ve said that all along. We made too many mistakes. I don’t think Walton necessarily stopped us all night. We stopped ourselves.”