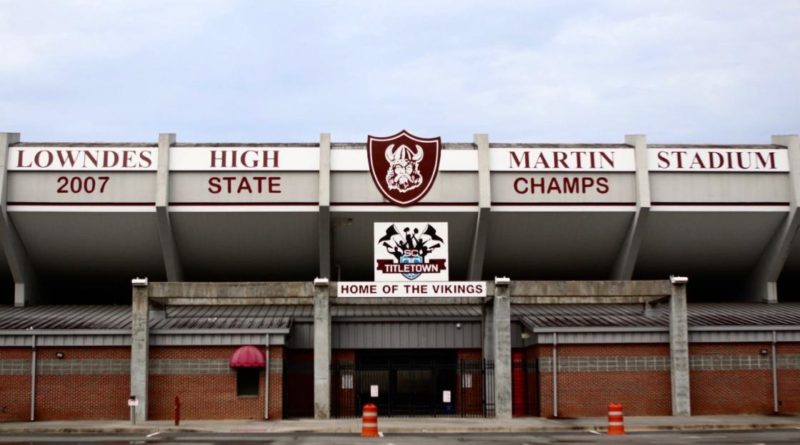 The high school football season kicks off this week in Georgia, with all the teams in the state’s top classification chasing Grayson, the defending state champion.

But thanks to unmatched star power in the state, the team that lost to Grayson in last year’s championship game tops SBLive Georgia’s preseason Top 25. Lowndes High School in Valdosta (photo above by Zach Edmondson) debuts at No. 4.

Our rankings include all classifications.

Collins Hill returns the No. 7-ranked quarterback in Georgia in Sam Horn, who will be joined on offense by highly recruited TE Ethan Davis. The Eagles’ defense will be led by Florida State commit Travis Hunter, the top-ranked cornerback and overall player in the nation.

Grayson lost a lot of talented players after its state title victory last season, including star quarterback and Miami (Fla.) commit Jake Garcia and running back and Clemson commit Phil Mafah, who was nominated for player of the year. Lucky for the Rams, talent doesn’t seem to run dry in Gwinnett County as they return UGA commit Griffin Scroggs and rising star senior running back Sean Downer.

Norcross suffered only one loss last season, and it was at the hands of the state champion Grayson Rams. This year, Norcross returns linebacker Zakye Barker, an East Carolina commit. Look for the Blue Devils to make another big statement on the field in 2021.

Lowndes will be led by a stellar quarterback in 2021 as the Vikings return Jacurri Brown, the No. 1 dual-threat QB in the country. There is no reason Lowndes won’t come back ready to make a run for state in 2021, as the Vikings begin their season Saturday against Walton in the Corky Kell Classic at Mercedes-Benz Stadium in Atlanta.

Newnan is looking strong, as the Cougars return five all-county players to a defense led by senior linebacker Tripp Slaton. On offense, all-county quarterback James Paige has transferred in from Northgate and will likely be targeting all-county wide receiver Johnathan Clark consistently in 2021.

North Cobb is the reigning region champ. In 2021, things won’t be slowing down thanks to the return of junior quarterback Malachi Singleton, who was named the Marietta Journal Player of the Year last year.

The Packers are one of those teams you can count on to perform well each year. They have won their region five times since 2014. Fans will get a taste of what to expect this year as Colquitt opens the season against Marietta.

Quarterback and Virginia Tech commit Devin Farrell is set to begin his final season leading the Eagles in 2021. With a three-star offensive lineman and Georgia Tech commit in Brandon Best, blocking for Farrell, the Milton offense is looking to terrorize opposing defenses all year long. And the defense is led by lineman Lebbeus Overton, the top-ranked junior recruit in the country.

Buford lost an outstanding senior class in which 16 players signed to play football in college. However, the Wolves roster is still loaded with talented players, including Stanford commit quarterback Ashton Daniels, four-star wide receiver Jake Pope and wide receiver Isaiah Bond, a Florida commit. The defending Class 6A state champs are looking to continue their reign of dominance in 2021.

Last year, Lee suffered a heartbreaking overtime loss to Buford in the state title game. Linebacker Jaron Willis, a Georgia Tech commit, is the No. 16 prospect in the state and is ready to help Lee exact revenge.

Heavily recruited defensive end Joshua Horton will lead the Langston Hughes defense in 2021. The Panthers suffered only two losses in 2020, and they have the talent to improve upon that impressive record this year.

Allatoona is the defending region champ and isn’t going to give that title up easily.  All-region safety Levi Brown will lead the Buccaneer defense in 2021, while dual-threat quarterback Saadiq Teel commands the offense.

2020 was a tough year on the Wildcats after the team was caught in a scandal over ineligible players. This will affect their 2021 season greatly, as they have been barred from all postseason play. Quarterback Amari Jones has transferred to Bradford, but players like safety Isaiah Holland and cornerback JaDarian Rhym will help Valdosta get back on their feet in regular-season play.

River Ridge’s backfield will be in great hands thanks to the return of running back Amehre Morrison, who rushed for just under 2,000 yards and a total of 31 touchdowns as a junior. All-state defensive end Brian Bradley will lead the Knights’ defense in 2021.

Last season, Carrollton lost only one region game by a single point (23-22). The Trojans are looking to improve upon their record and make a deeper run in the playoffs in 2021 as they will be led by an experienced quarterback in NC State commit MJ Morris.

Head coach Barrett Davis has taken the reins at Evans after former coach Lem Lackey retired. Evans is poised to top its region for a third straight time in 2021.

Westlake fell just short of a state title shot last season, losing to eventual state runner-up Lee in the playoffs. MaxPreps All-American quarterback RJ Johnson is back for his junior year. After dominating the 2021 Corky Kell Classic 7-on-7 tournament, the Lions look to dominate on Friday nights this fall.

Defensive lineman Stephiylan Green has an offer from UGA and will hold it down in the trenches for the Wolves defense in 2021. Fans are excited after the Wolves shut out Kell 35-0 in a preseason scrimmage game.

Parkview has some young talent going into 2021. Most notably, wide receiver and defensive back Jalyn Crawford is looking to have a big year after receiving attention from Pittsburgh and Georgia Tech as a sophomore.

Warner Robins decimated Cartersville 62-28 in the 5A state title game last season. Wide receiver Dacron Walker is the 5A leader in receiving yards going into 2021, so the Warner Robins passing game could spell danger for opposing secondaries.

After a disappointing performance in last year’s 5A state title game, Cartersville is looking to redeem itself in 2021. The Hurricanes appear on track to win their region this year, so it looks like redemption isn’t far out of reach.

Senior offensive lineman Elijah Pritchett is being offered by multiple D1 programs. He’ll block for quarterback and Middle Tennessee commit Devin Riles as they lead the way for Carver’s offense this year and attempt a deeper run in the playoffs.

Marist is the reigning state champion and isn’t looking to slow down in 2021. Head coach Alan Chadwick is only one game away from securing his 400th win, making him the second coach in Georgia to accomplish such a feat.

GAC fell just short of the 3A state title game in 2020, losing to Oconee 21-20 in a heartbreaker. Players like three-star athlete and  Virginia commit Will Hardy and four-star offensive lineman Addison Nichols will lead GAC to a potentially more dominant season in 2021.

Fitzgerald suffered only one loss in 2020, and it came at the hands of Callaway in the 2A state title game. All-state linebacker E.J. Lightsey is a top recruit who was a tackling and sack machine in 2020, and he’s set to lead the Purple Hurricanes to yet another huge year in 2021.