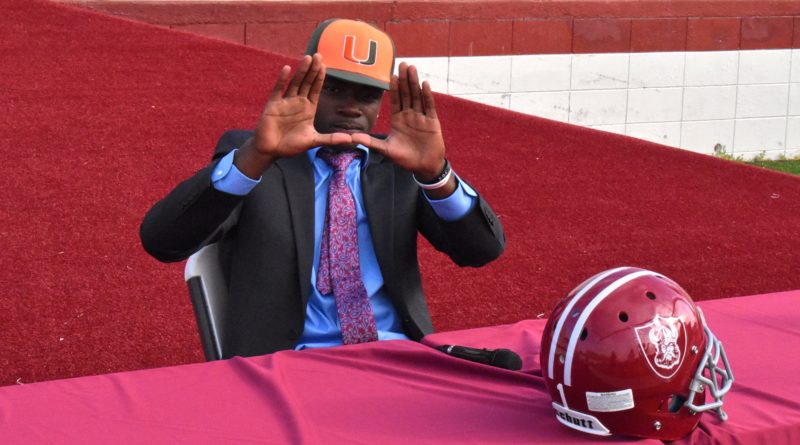 VALDOSTA – The Miami Hurricanes will have a top dual-threat quarterback joining the team in the fall of 2022.

Jacurri Brown of the nationally ranked Lowndes High School Vikings announced that he will be committing to the University of Miami as family, coaches, and teammates watched on Friday morning.

The newly committed quarterback is the No. 5 dual-threat quarterback in the Class of 2022, according to 247Sports.

The quarterback visited the campus in Coral Gables on March 20, which could have solidified his decision to become a Hurricane.

With his senior year looming, Brown has tallied 6,729 total yards and 72 touchdowns while also leading the Vikings to a GHSA 7A State Championship appearance in 2019.

Brown will join his former Vikings teammate, linebacker Thomas Davis, who is currently preparing for his freshman year with the Hurricanes.

Brown was not expected to pick Miami in the beginning, especially after much speculation of him choosing the University of Florida over his other offers.

“Florida’s offensive coordinator (Brian Johnson) leaving played into my decision,” Brown said. “When I went down to Miami, I had a good feeling and a good vibe. Miami is a big market that I can show people who I am outside of football by giving back to the kids and leaving a legacy. Coach Rhett (Lashlee) and Manuel (Diaz) are building something special down there.”

Even Brown said that he did not think he would go to Miami, but the Hurricane coaching staff made the biggest push down the home stretch, ultimately winning him over.

“I never thought I’d go to Miami,” he said. “I never opened my eyes to it until it got closer to the end and things got serious.”

“I just was trying to keep my head right and it’s a good feeling to be wanted by many places and having the opportunity to make something better out of yourself by going to college,” Brown said.

Brown will now prep for his senior season with the Vikings, which begins on August 21 when they take on Walton at Mercedes-Benz Stadium in Atlanta.