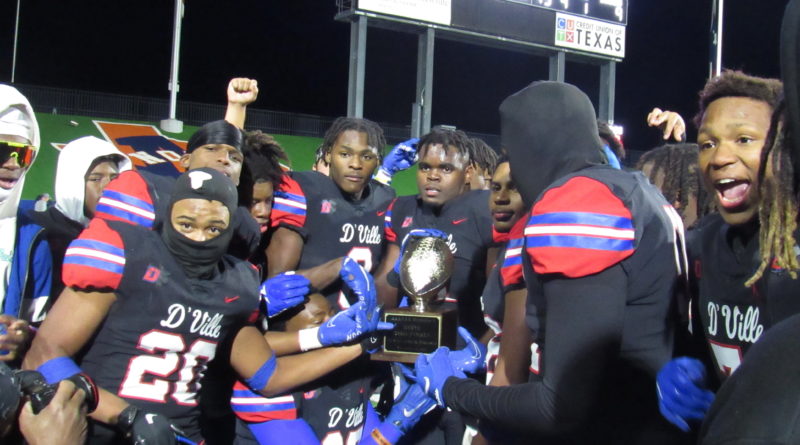 The Panthers (13-1) blasted Southlake Carroll 35-9 on Saturday to advance to their third state championship in four years.

In a game that was touted as the “must-see” matchup of the week, the Panthers made light work of the Dragons (14-1) and their perfect season.

Through a stifling defensive performance and another showcase of elite offense, the game was never in question for Duncanville.

“We planned on that,” Samples said. ‘We saw some things that we thought could take advantage of, stopping the run, making them throw, and it worked out.”

Malachi Medlock put the state of Texas on notice once again, posting another big game with 143 yards rushing along with a receiving touchdown.

After the game, he stayed true to his humble personality and credited his line for success.

“I gotta thank my O-line,” Medlock said. “That’s how I’m doing it, my O-line is holding up their blocks and doing everything so I’m thankful for them.”

Quarterback Solomon James was sensational as well, finishing a perfect 12-for-12 with 154 passing yards and three touchdowns along with a 34-yard rushing touchdown in the third.

James was embraced by his teammates in an emotional huddle after the victory, holding the trophy high and ready to return to the state championship.

Coach Samples was delighted with his team’s performance, emphasizing the pride he felt in the way they played.

“I’m very happy,” he said. “The kids played well, my coaches did an outstanding job of preparing the kids, and the kids bought into the gameplan.”

Ahead of their state championship matchup next week against North Shore, the Panthers are looking to rewrite history against an old rival.

The Mustangs have had the Panthers’ number after defeating them twice in the state finals, (2018 & 2019), over the last three years.

With a chance to win at all once again, Medlock shared what was going to be the key for coming out on top.

The matchup will take place at AT&T Stadium next Saturday afternoon, as Duncanville looks to secure its first football state championship since 1998.