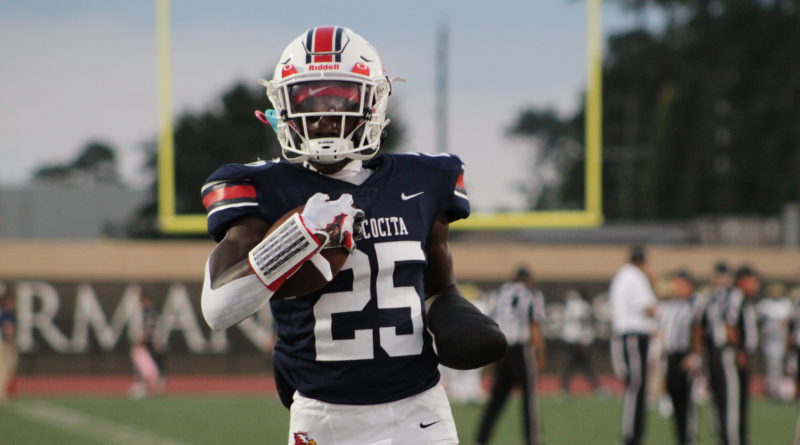 The 2021 Texas high school football season rolls into Week 9 and as district title races around the state intensify and the playoff picture starts becoming clearer.

This week saw several teams climb our statewide rankings after enormous wins in Denton and Humble defined the eighth weekend of the Texas high school football season and shook up our top 10.

Below are SBLive’s Texas Top 50 rankings for the week of Oct. 18. The rankings are compiled by reporter Andrew McCulloch and will be released every week throughout the fall.

For the first time this season, no teams featured in SBLive’s Texas Top 50 dropped out of the statewide rankings. The three newest additions to the Top 50 — Ennis, Frisco and Montgomery — each justified their spots by earning marquee victories during their first week as ranked squads. Ennis held onto its spot after the Lions ran away with a 66-21 home victory against Crandall to stay undefeated and in a three-way tie for first place in District 8-5A DII with Forney and Royse City at 4-0 against district competition. Frisco and Montgomery, meanwhile, moved up one spot each to 46th and 47th, respectively, to surpass Manvel in the Texas Top 50 following critical wins in district play. Frisco eked out an impressive 28-14 road win over Denison, as the Racoons stayed tied with Lucas Lovejoy for first place at 5-0 in District 7-5A DII games this season. Montgomery took down College Station A&M Consolidated in a back-and-forth 35-28 victory to pick up a third consecutive crucial district win and take a commanding lead in the 10-5A DII district title race. Manvel fell behind the Bears and Raccoons for the first time this year in the Texas Top 50 after the Mavericks tallied another impressive 48-14 win against Richmond Foster to improve their positioning in the District 10-5A DI playoff race. Fellow 5A teams Amarillo Tascosa and Frisco Lone Star also each moved one step closer toward clinching district championships too. Tascosa held onto its spot this week following a 46-14 victory over rival Amarillo Caprock to nearly claim the District 2-5A DI title with three weeks left in the regular season. Lone Star climbed one spot up to 42nd in this edition of SBLive’s Texas Top 50 after the Rangers dominated Frisco Wakeland 33-3 for the program’s fifth consecutive win in district play. San Antonio Johnson also continued to ascend the statewide rankings following a tight 42-35 victory on the road against San Antonio Madison on Saturday to stay unbeaten and tied with San Antonio Reagan for first place in District 28-6A. Austin LBJ, the highest-ranked squad in Class 4A Division I for the third straight week, held onto its spot in the Top 50 with a 40-14 road win over Fredericksburg. Cedar Hill, though, dropped eight spots after being on the receiving end of a lopsided shutout against rival DeSoto in Week 8. Despite one the state’s most difficult 2021 schedules that has included losses to Allen, Rockwall and DeSoto, all 6A teams ranked inside the statewide top 25 by SBLive, the Longhorns remain in the mix for the District 11-6A championship and are still searching for their first signature victory of the year.

Lucas Lovejoy and Katy Paetow, two of the state’s hottest 5A teams, continued their climbs up our Top 50 rankings after statement wins last weekend. Lovejoy moved up one spot after beating Lake Dallas 55-7 in a decisive road win in which the Leopards’ defense allowed -112 rushing yards. Paetow, meanwhile, climbed three spots to its highest ranking of the season so far after blasting Rosenberg Terry 74-0 on the road. The Panthers have played 12 consecutive quarters of shutout football defensively and have hung a combined 272 points on their last four District 10-5A DI opponents. Garland became one of the biggest risers among all the 6A teams in this edition of SBLive’s Texas Top 50 by topping Sachse in a 54-41 shootout win to move up five spots after being on a bye in Week 7. The Owls have scored at least 41 points in every game this season and hold a commanding lead in the District 9-6A championship race. Midland Legacy and League City Clear Falls were another pair of 6A squads that got a boost in this week’s rankings. Both programs moved up one spot to 33rd and 35th, respectively, after the Rebels demolished Odessa in a 65-0 road victory to hold onto first place in District 2-6A and the Knights took down Clear Lake 38-7 in District 24-6A action. Carthage, which remained the state’s highest-ranked sub-5A team in the Top 50 for the eighth consecutive week, rolled to its second straight district win in a 28-0 home victory over Jasper to move up three spots. Houston-area 6A powers Dickinson and C.E.King, however, each slipped in this week’s SBLive Texas Top 50. Dickinson fell three spots after multiple signature victories moved a trio of other 6A squads ahead of the Gators during their bye week last weekend. C.E. King, meanwhile, dropped six spots to 38th following the team’s first loss of the season in a 42-21 defeat to Humble Atascocita in a high-stakes matchup with major implications for the District 21-6A title hunt. Alvin Shadow Creek and Corpus Christi Veterans dropped two spots and one ranking, respectively, this week after securing blowout victories against overmatched opponents. Shadow Creek downed rival Alvin 49-13 as the Sharks improved to 4-0 in District 23-6A to remain locked in a tie for first place with Pearland. Corpus Christi Vets, the top-ranked Coastal Bend team in the Top 50 throughout the entire season, crushed winless Corpus Christi Carroll 66-24 to hold onto sole possession of first in District 15-5A DI.

DeSoto secured the most significant Week 8 victory among teams in this portion of SBLive’s Texas Top 50. The Eagles blanked rival Cedar Hill 45-0 in the Battle of the Beltway and the team’s most impressive all-around performance of the season to date. The victory vaulted DeSoto four spots up this edition of our statewide rankings and gave the program a firm grip on second place in District 11-6A as the postseason nears. Bridgeland, meanwhile, slid for the second straight week after the Bears lost their second straight district game 35-13 to Cy Park amid an injury that has sidelined standout senior quarterback Conner Weigman for most of October. Bridgeland fell six spots this week and outside of the top 20 for the first time this season. Highland Park and Katy Tompkins each ascended a spot in this week’s rankings as well. Highland Park earned a 59-24 road win over McKinney North for the Scots’ sixth straight victory, while Tompkins shutout Katy Morton Ranch in a 47-0 blowout. Austin Vandegrift leapfrogged Lewisville, both still unbeaten 6A squads, to move up two spots this week from 31st to 29th. Vandegrift strengthened its grip on first place in District 25-6A last weekend when the Vipers beat one-loss Round Rock Cedar Ridge 35-7 on the road, while Lewisville throttled Plano in a 44-15 road victory. Smithson Valley and Cibolo Steele fell one and two spots in this edition of the rankings, respectively, but remained locked in a tie for first atop District 27-6A. Smithson Valley crushed winless South San Antonio 41-6, and Cibolo Steele notched its first shutout win of the season 21-0 against Schertz Clemens as both teams stayed undefeated on the year. Fort Bend Ridge Point and Spring rounded out Week 8 action in this part of the Top 50 with decisive Thursday victories over Richmond George Ranch (44-14) and Aldine Davis (39-3), respectively.

Cy Park became one of the biggest climbers in this week’s rankings after dismantling Cypress Bridgeland 35-13 to move up four spots and ward off the Bears’ challenge for a share of first place in District 16-6A. The Tigers have outscored their opponents 204-27 during a 4-0 run to open district play. Lake Travis and San Antonio Brennan, meanwhile, remained inside the top 15 as the top-ranked challengers to Austin Westlake at the top of Region IV. Lake Travis ran away with its four consecutive blowout victory with a 52-17 win over District 26-6A foe Austin Del Valle. Brennan continued its run as the San Antonio area’s top-ranked squad after the Bears bashed San Antonio O’Connor 54-7 in Week 8 action. Crosstown rivals Rockwall Heath and Rockwall held down the top spots on the edge of our top 10 this week after the Hawks’ bye week and the Yellowjackets’ 42-21 win against winless Dallas Skyline. Aledo and College Station, two of the state’s top teams in Class 5A, each received a bump in this week’s Top 50 rankings following significant district victories. Aledo moved up one spot and celebrated its 100th consecutive district win — a streak that dates back to October 2007 — by topping Mansfield Timberview 35-21 on Friday night. College Station crushed Cleveland 76-0 in District 8-5A DI competition to climb two spots inside the top 20 of our statewide rankings. The Cougars are averaging 51.1 points per game offensively, while their defense has held opponents to one score of fewer in four straight wins. Fort Bend Marshall and Arlington Martin retained their spots inside the top 20 after Marshall manhandled Fort Bend Willowridge 56-7 to stay undefeated and Martin outmuscled Arlington Bowie 68-14. Euless Trinity fell one spot after beating Fort Worth Chisholm Trail 56-7 at home in Week 8.

Allen and Humble Atascocita secured marquee victories against previously undefeated ranked opponents to shoot up our statewide rankings. Allen won its fifth consecutive game in a 38-31 upset road win against Denton Guyer, knocking the Wildcats out of SBLive’s Power 25 national high school football rankings. Allen’s signature victory moves the Eagles into sole possession of first place in District 5-6A, while Guyer drops five spots with the loss and falls outside of the top five. Atascocita also earned a crucial district win last weekend and handed Houston C.E. King its first loss of the season to keep pace in a tight 21-6A district championship race. The Eagles climbed three spots up to seventh this week after improving to 2-1 this season against teams ranked in SBLive’s Texas Top 50. The other major statement win by a top 10 team came from top-ranked Austin Westlake, which throttled Buda Hays in a 77-0 road blowout in District 26-6A play. The Chaparrals were without their starting quarterback — senior and Clemson commit Cade Klubnik — due to an injury, but didn’t skip a beat with senior Christian Edgar under center Thursday. Edgar was nothing short of electric during his first career start for Westlake, throwing for 188 yards and four touchdowns on 9-of-10 passing and running for 104 yards and two rushing scores on three carries. Katy also held down its spot inside the top three, as the second-ranked Tigers stomped Katy Cinco Ranch 49-3 on Saturday to improve to 4-0 in district play with two regular-season games remaining. Duncanville, meanwhile, leapfrogged Galena Park North Shore in this week’s edition of the Texas Top 50 to move up two spots to fifth overall. The Panthers pounded District 11-6A foe Waxahachie in a 52-3 beatdown Friday for their fifth straight victory since a season-opening loss to Mater Dei, the top-ranked team nationally in SBLive’s Power 25. Duncanville has outscored its opponents 187-3 in its last three district games and remains undefeated against Texas competition. North Shore and Spring Westfield, meanwhile, each displayed their dominance in blowout Week 8 district wins against Humble Summer Creek (45-16) and Aldine MacArthur (70-0), respectively.