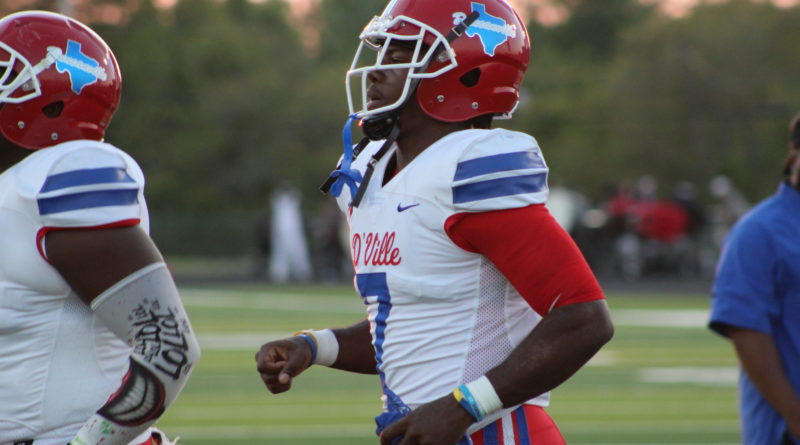 DESOTO, Texas — It only took DeSoto two plays to turn the tide in a stalemate against rival Duncanville on Friday night.

Eagles’ senior safety Devyn Bobby, a Baylor commit, leaped backward to high-point and intercept a pass at the goal line, and on the next play, quarterback Matthew Allen unloaded a bomb to senior wideout Johntay Cook, who raced down the sideline untouched for a 99-yard touchdown.

The explosive score placed the Panthers in an early hole, but Duncanville — the 20th-ranked team in SBLive’s Texas Top 50 rankings — rallied behind the strength of its defense and rushing attack to score five unanswered touchdowns to earn a 42-21 comeback victory over No. 20 DeSoto in the District 11-6A opener for both teams Friday at Eagle Stadium.

“Man, we just beat DeSoto. I’m just so happy that we won and to be moving on,” Duncanville senior running back Malachi Medlock said. “This is a big win. Coach (Reginald) Samples said if we can win this, we’ve got a chance at running it until the playoffs. We just have to keep on getting better and keep going.”

“We wanted it more,” Duncanville linebacker Colin Simmons said. “We showed everyone that we wanted to play. All that talking on the internet and stuff, we don’t take that lightly. That’s how we talked back.”

“I am honored. It’s just the culmination of a lot of hard work, good players and a great coaching staff,” Samples said. “I’m proud of the coach part, not just the African American part. The coach part.”

DeSoto’s two-play sequence not only gave the first points of the game to the Eagles, but wiped out a would-be Panthers’ touchdown on their second drive of the night courtesy of Bobby’s interception of Duncanville senior quarterback Solomon James.

James and the Panthers, however, buckled down and shortly thereafter reversed their fortunes with a remarkable run to end the second quarter.

After DeSoto added another score on a 7-yard touchdown pass from Allen to senior receiver Stephon Johnson Jr. — an Oregon commit —  to move ahead 14-0, the Panthers began their comeback midway through the second quarter.

Medlock capped off a long drive with a 7-yard scoring run to get Duncanville on the board, and sophomore Caden Durham reeled off a 30-yard touchdown scamper to knot it up with 73 seconds to go in the first half.

The Panthers’ defense then forced a quick three-and-out on DeSoto’s next possession and capitalized when senior linebacker Davion Bluitt returned a punt 78 yards for the go-ahead touchdown with 27 seconds before halftime.

“We just had to keep our heads up and keep playing because we still had the whole rest of the game to play,” Simmons said.

Duncanville never looked back from that point forward.

The Panthers’ offense put its first-half struggles in the past. James and sophomore Jameir Wills split time under center throughout the second half, but Duncanville was nearly unstoppable on the ground.

Medlock and Durham combined to score four touchdowns on the night.

Durham put the team on his back throughout the second half, breaking away for several big first-down runs that helped chew clock and keep Duncanville’s offense out on the field. He added his second score on a 34-yard sprint to the end zone.

Medlock, the team’s workhorse back who reopened his recruitment earlier this week, nearly topped the 100-yard rushing mark during the first half and showed his versatility by alternating between charges up the middle and elusive runs to the outside.

The senior scored the last touchdown of the night, a 25-yard burst through the middle, to seal the Panthers’ win and credited Duncanville’s offensive line for the unit’s big night on the ground.

“I’ve got to thank my O-line because without them, I never would have gotten those touchdowns,” Medlock said. “They’ve been great (this season). Things started off tough, but they’ve pulled through.”

Defense, however, was most responsible for securing the come-from-behind victory for the Panthers.

Duncanville won the turnover battle decisively after tallying four takeaways, many of which led directly to points.

Simmons forced the first turnover with a strip-sack fumble recovery deep in DeSoto territory, which ultimately set up the Eagles’ interception and long touchdown pass.

The Panthers, however, were also able to recover a muffed punt by the Eagles, which led to Durham’s second trip to the end zone, and added a defensive score after Lamoderick Spencer jumped a pass near midfield for a pick-six to put the game out of reach during the third quarter.

“(Our defense) helped us tremendously,” Medlock said. “Without them, I don’t know what this game would have turned out to be.”

“We knew we were good all along,” Samples said. “We just had some not-believing-in-each-other problems. We’ve been talking about it — stay together, be a family — and we started it tonight.”

Duncanville’s Solomon sported a 7-of-11 night passing for 96 yards, a touchdown and an interception. Wills completed 10 of 19 passes for 73 yards.