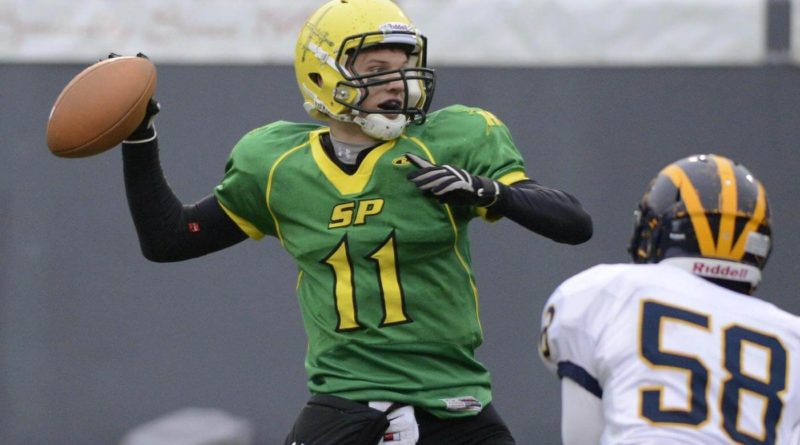 These days, Spokane native Brett Rypien had plenty on his mind as an NFL quarterback with the Denver Broncos.

“I always think back to the Bill Parcells quote of Year 3,” Rypien said. “Basically you’ve got to show what you can do, or you’re out.”

But on Saturday, he said he would likely tune into the pursuit of another Washington quarterbacking great – Sam Huard, the senior at Kennedy Catholic who could be playing his final high school game.

Plenty is at stake: Huard is 333 yards away from taking over as the all-time leading passer in WIAA history.

And the guy on top of that list for what could be just 24 more hours? It is Rypien, who lit up the Greater Spokane League for 13,044 career yards while starring at Shadle Park High School before heading off to Boise State University.

“Brett is one of the most competitive guys I know,” Shadle Park coach Jim Mace said. “I am sure he is pretty proud of those records.”

Back in 2014 – Rypien’s senior season – the Highlanders’ program was in a state of flux.

Alan Stanfield, who installed the Air Raid offense as the coach, left for a job at Whitworth College (he is now at Baldwin High School in Pennsylvania). Mace took over the reins, and hired Tim Rypien – Brett’s father – to coordinate the offense, which featured a whole new crew of wide receivers.

To catch career passing record-holder Max Browne (12,953), of Skyline High School, Rypien would need to post a career year of at least 4,450 yards.

And that is what he did.

“My dad is an unbelievable motivator,” Rypien said. “And he learned the system very, very well from (Stanfield)… We put a lot of work in that offseason. I remember trying to get on the same page and it was a lot of fun working with him, and working with those guys that were in my class.”

It all came down to Rypien’s final game – a state quarterfinal matchup with GSL rival Mount Spokane. He needed 237 yards to become the new passing king in Washington. He finished with 329 in a loss – 4,552 yards for the season, and 13,044 yards for his prep career.

“One of the (Spokane-area) reporters came up to me after the game and said, ‘Hey, you know, congrats – you just had one of the most prolific careers in Washington football history!'” Rypien said. “And my whole mindset was, we lost the game, so it was kind of bittersweet.

“But looking back on it now, it was obviously a really cool moment.”

Rypien said the first time he was made aware of Huard was in college. Brock Huard, Sam’s uncle, had talked about the teenager when he would come into town as an ESPN color commentator for Boise State games.

“I’ve heard nothing but good things about Sam,” Rypien said. “He seems like the type of guy that I was in high school – very cerebral and obviously very, very talented as well.”

Right before last NFL season, somebody mentioned to Rypien that Sam Huard was closing in on his passing record. And this week, his father told him the mark could go down this weekend.

“I’ll probably try to stay updated – maybe refresh the Twitter feed every once in a while and see,” said Rypien, who still holds the WIAA single-game passing record of 613 yards, set in 2013.

“I’ve seen some of the stats he’s been putting up this year … and (333 yards) should definitely be doable for him. I’m pulling for him.”