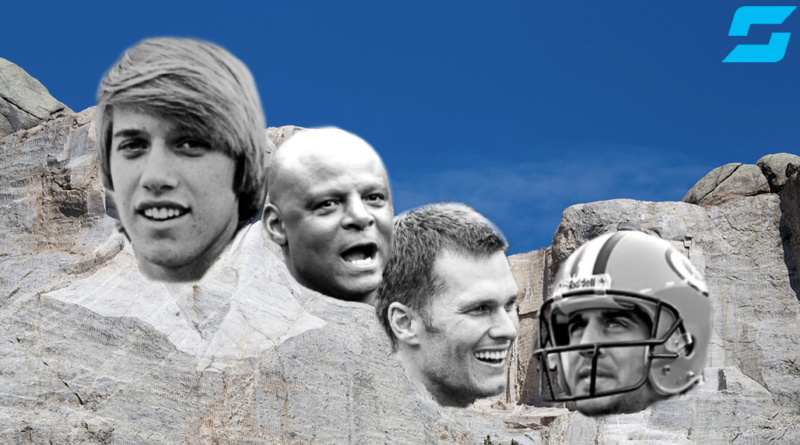 The Golden State has produced some incredible quarterbacks over the years. Ahead of Super Bowl LV – which features former Serra San Mateo quarterback Tom Brady – we’re posing the question: who would make the Mount Rushmore of California high school quarterbacks?

To put together our Mount Rushmore, we examined the totality of each quarterbacks’ career, not only what he did in high school.

With only four spots available, it’s a tough call. The first three – Brady, John Elway (Granada Hills) and Aaron Rodgers (Pleasant Valley) – are tough to argue, but picking the fourth quarterback proved to be challenging. From Dan Fouts to Norm Van Brocklin to Jim Plunkett to Warren Moon, there are several worthy candidates.

Here is our Mount Rushmore, in order of how we would sculpt them:

Is there any question about who’s No. 1 on this list? Forget California – Brady sits atop the Mount Rushmore of greatest quarterbacks in the history of the sport.

Everyone knows the story: the unheralded sixth round pick who became the greatest quarterback of all time. Brady will play in his 10th Super Bowl on Sunday, his first with the Tampa Bay Buccaneers after playing in nine and winning six with the New England Patriots.

Brady is second all-time in NFL history in passing yards and first in passing touchdowns. Before he became the G.O.A.T., Brady played at Serra High School in San Mateo. He was the varsity quarterback for two seasons, graduating in 1995. Brady also played baseball at Serra and was drafted in the 18th round of the 1995 MLB Draft by the Montreal Expos as a catcher.

Elway is the second face on the California high school quarterback Mount Rushmore. The Granada Hills High grad (Class of 1979) attended Stanford before being drafted No. 1 overall in the 1983 NFL Draft by the Denver Broncos.

Elway led the Broncos to five Super Bowls, winning two. He won the NFL MVP award in 1987 and was elected into the Pro Football Hall of Fame in 2004. He’s now the President of football operations for the Broncos.

Elway played for three seasons at Granada Hills after his family moved from Pullman, Washington following Elway’s freshman year of high school. He threw for 5,711 yards and 49 touchdowns in his high school career. Like Brady, Elway was also selected in the MLB Draft. The Kansas City Royals picked Elway in the 18th round of the 1979 Draft.

Rodgers occupies the third spot on our Mount Rushmore. Despite losing in the NFC title game to the Tampa Bay Buccaneers last month, Rodgers had one of the best statistical seasons of his career in 2020 and he’s the favorite to win the NFL’s MVP award.

Rodgers graduated from Pleasant Valley High in Chico in 2002. He set a single-season school record with 2,466 total yards in his senior season in 2001.

Following high school, Rodgers attended Butte Community College in nearby Oroville, where he played one season before transferring to Cal. Rodgers started under center for two years at Cal before being selected 24th overall in the 2005 NFL Draft by the Packers.

Rodgers led the Packers to Super Bowl glory in 2011 when Green Bay defeated the Steelers 31-25 to win Super Bowl XLV. Rodgers was named MVP of the game. He also won NFL MVP awards in 2011 and 2014. Rodgers will be a first ballot Pro Football Hall of Famer whenever he decides to hang up his cleats.

We considered several quarterbacks for the final spot on our Mount Rushmore, including Dan Fouts, Jim Plunkett, Carson Palmer, Norm Van Brocklin and Randall Cunningham. But in the end, we went with Moon.

In 1973, Moon led Hamilton High to the LA City Section playoffs and he was named to that year’s All-City team. After graduating from Hamilton in 1974, Moon attended West LA College for a year before going to Washington where he started under center for the Huskies in their 1978 Rose Bowl triumph over Michigan.

After college, Moon went undrafted in the 1978 NFL Draft despite his college success, so he opted to play professionally in Canada. He played for the Edmonton Eskimos of the CFL and led the team to five straight Grey Cup wins.

After six years in the CFL, Moon signed with the NFL’s Houston Oilers in 1984. He played 17 years in the NFL with the Oilers, Minnesota Vikings, Seattle Seahawks, and Kansas City Chiefs. He was a nine-time Pro Bowl selection and put up unbelievable numbers: 49,325 passing yards (No. 12 all-time), 3,988 passes completed (No. 12 all-time) and 291 passing TDs (No. 14 all-time). If you combine his CFL and NFL stats, it puts him among the Top 5 quarterbacks in the history of pro football.

Moon was elected into the Pro Football Hall of Fame in 2006.