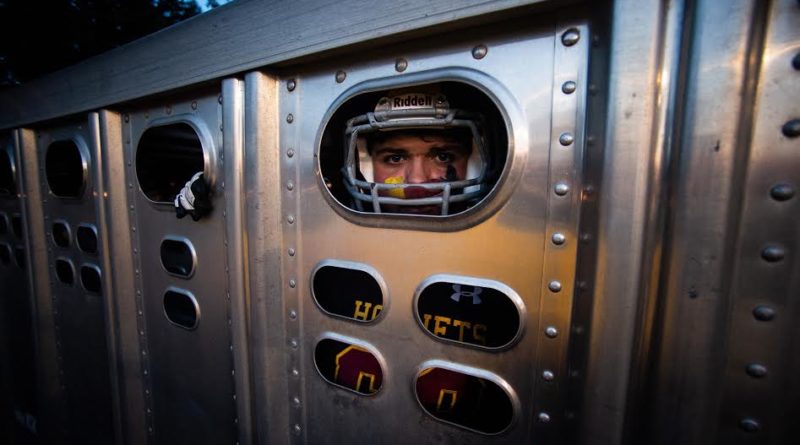 SBLive Washington is previewing the Top 50 high school football teams in the state ahead of the 2020-2021 season. Here’s an inside look at the Enumclaw Hornets of the 2A SPSL – No. 45 in our countdown. (Feature photo by Joshua Bessex/The News Tribune.)

Teaming up with Bonthius as an inside duo, Brazier is bigger (20 pounds) and ready to be Enumclaw’s next star.

Had a lost season in 2019 (foot), but Luchi is a punishing road grader at left guard who has bulked up.

If defenders don’t trip up this fearless, violent runner at the line of scrimmage, he’ll go the distance.

If you need a visual on how Enumclaw football is built, look at a specific poster frame.

In a remake of “The Dawgfather,” the old series of posters featuring former University of Washington coach Don James, the Hornets have their past four consecutive-year all-4A NPSL first-team tailbacks posing with running backs’ coach Scott Ellertson.

Head coach Mark Gunderson sees no reason why that streak of all-league performers won’t continue in a move to the 2A SPSL.

“I joke around that we are the only program in America that has a running backs group as big as a wide receivers group,” Gunderson said.

“We don’t have to tell our kids to play running back – they want to be that next great running back.”

And Gunderson will keep rotating a bunch of them through in their ground-and-pound approach, led by Royal Snyder and Ricky Bronthius as the starters. Others expected to see action include Cameron Brazier, Dawson Harding, Dane Johnson and Emmit Otero.

But the team’s biggest spectacle – in all ways – is how it introduces its beef. Before home games, the offensive linemen, one by one, are called out of a livestock trailer that is driven on the stadium track.

And Enumclaw has a good stock of blockers, led by Lorenzo Luchi and Ryder Popke.

“We’ve got tough kids,” Gunderson said. “And we talk a lot about being the blue-collar community we are in.”

“Football camp, spring ball and summer workouts all contribute to the fellowship and brotherhood. It has been extremely difficult to not have all these events.”

“We had three awesome dads that ran our team workouts in a barn at the King County Fairgrounds. It gave kids something to do, and do together. All COVID-19 protocols were followed. It was a grind!” – Mark Gunderson