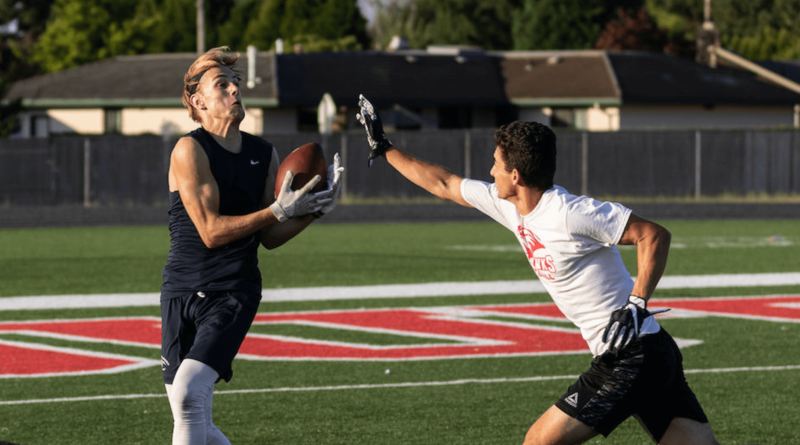 If state health guidelines do not allow for contact sports to take place by early February, one option the OSAA will consider is replacing traditional tackle football with a passing-only version of the sport — something Vermont did during the fall, to mixed reviews

With less than four weeks until the scheduled Feb. 8 start date, Oregon high school football coaches remain optimistic that by this time next month, they’ll have their first official practices in the book in preparation for an abbreviated six-week season concluding with a culminating-week event that has yet to be determined.

They also cast a wary eye at the metrics, however, and with more than 1,000 confirmed cases of COVID-19 in the state every day but one since Dec. 30, many are waiting for the other shoe to drop — that state health officials will not approve contact sports to take place, forcing the OSAA to cancel the season.

The most recent guidance issued by the Oregon Health Authority on Jan. 6 continues to list football, basketball, wrestling and boys lacrosse as “full-contact sports” that remain prohibited activities. This guidance would need to change in the next month for football practice to begin.

When the OSAA Executive Board announced the changes to the high school sports calendar last month, executive director Peter Weber acknowledged the possibility that the guidance might not change. He also explained how a group of athletic directors and coaches have worked the past several months on developing options for a full-contact season if it takes place — and alternatives if one could not happen.

One alternative being studied is switching to a 7on7 (or 7v7) format for the season — something that only one state, Vermont, has chosen to date for the 2020-21 school year, although Texas offers a summer 7on7 league complete with an official state championship.

While many coaches and players do not favor a 7v7 season, if the choice comes down to 7v7 or nothing, they often fall on the side of doing something.

“Definitely all of us, especially the seniors, want to play tackle football,” said Lakeridge senior quarterback Andrew Oliver, who has signed with The Citadel. “But we know that might not be a possibility. I know a lot of us would be interested in competing.”

“At the end of the day, we just want to play. We want to do something,” Layne said. “I’d definitely rather play tackle. I know I’ve been waiting nine months for this. We feel like it’s so close. But, if it happens to be a 7-on-7 season, we’d roll with it. We’ll just ball like we’ve prepared to do since last season.”

Explaining the 7on7 rules

Most summer 7on7 passing leagues follow the Official USA Football 7on7 Rules, which include:

The Texas summer league has some added wrinkles in its rules, such as a different starting line for each possession (the 45-yard line) and the ability to record safeties if a receiver is downed behind the 45.

Vermont, meanwhile, incorporated some rules from the tackle season into its 7on7 fall season, such as possessions starting at the offensive team’s 30-yard line and the ability to punt and kick PATs and field goals “for the development of the kicker’s skills.” The rules also included COVID-specific regulations for the health and safety of players and coaches.

Vermont coaches mixed in their reaction to 7on7 season

Rich Alercio, the head coach at 2019 Division I runner-up St. Johnsbury Academy in Vermont, said most of the resistance to the 7on7 season came from run-dominant programs and parents on social media. He emphasized the need for coaches to stress to players, coaches and parents the benefits of having a football season — benefits that stretch beyond mere wins and losses on the field.

“You need to eliminate those who will say, ‘This is not real football,’” Alercio said. “It is football, just not what you are accustomed to. And, more importantly, it is the only option to work with kids, keep them active and engaged, and have a positive influence on their lives.”

Alercio and Burlington coach Matthew Currier attempted to recreate as much of the “Friday Night Lights” experience for their players as possible. Alercio, for instance, had his team go through its pregame walkthrough and warm up to hype music, run down the hill to take the field, and sing the alma mater after victories to the limited number of fans (150 total) allowed at games.

“Our program developed the understanding that if this is our only option for a season, then we will play our hearts out,” Currier said. “Our players were determined, focused and committed. Our senior families got that opportunity to witness their young players’ final season.

“The predominant reaction was that players, families and coaches were not extremely impressed, but it was better than nothing at all.”

In the other camp is longtime Bellows Falls coach Bob Lockerby, who is quite hopeful the 7on7 season was a one-year-and-done response to the pandemic never to be repeated.

“You’re not blocking, tackling or running the football,” Lockerby said. “I’m not a big fan of passing the ball, so for me, it was very difficult. We got to work on pass coverage, so we got to work on that, but it’s almost false work because you’re doing it with no pass rush and nothing else in mind.”

All three Vermont coaches lamented that they had some players decide not to turn out for the 7v7 season — especially their offensive and defensive linemen. Lockerby estimated he lost up to a dozen players who came to him before the season and told him, “Why bother?”

Alercio said the initial plan was for schools to offer a “Lineman Challenge” that would incorporate drills and other competitions for them, but “it was determined that would not be much fun if it was the same competition every week.”

Instead, the state ended up having linemen play the first and third quarters of games, with skill players on the field for the second and fourth quarters.

“This was not well-received throughout the state,” Alercio said. “Some schools fielded full linemen teams, some hybrids, and others did not play them. As a state, we dropped the ball on this.”

Sheldon senior Shane Schwake, a 6-foot-8½, 290-pound offensive lineman who signed with Eastern Washington last month, participated in a 7on7 fall league in the Eugene area that also had linemen playing two quarters. His assessment: “It was fun in the moment, but it’s not football.”

Lakeridge senior Luke Basso sees the 7v7 game from both sides. He played offensive line all through youth football and still serves as the Pacers’ long snapper and backup center, earning a preferred walk-on offer from Oregon, but he also plays tight end and defensive end, meaning he played 7on7 over the summer.

During a fall passing league at La Salle High School in Milwaukie, he’d watch his linemates walk up to the school to practice and work on blocking schemes.

“I can definitely sympathize how rough that would be, watching from the outside,” he said.

Oliver added, “Our linemen are by far the most important part of the team. Hopefully, the coaches and the OSAA can think of something for them to participate and to compete, especially for all the seniors.”

Lack of physical training could help 7on7 cause

The inability to work with players and properly prepare them for the rigors of a full-contact tackle season worries some football coaches as the clock ticks toward Feb. 8.

Beaverton coach Bob Boyer points out that most programs typically have a couple weeks of spring drills, then summer camps, passing leagues, weight training, two weeks of two-a-days, a jamboree and finally another week of preparation before playing their first game of the fall.

Now, they’ll have to cram all of that prep time into a three-week window before kicking off their six-game schedule.

“I go back and forth on this,” Boyer said. “The 7on7 option is much safer, but what do you do with linemen? We’ve talked about having linemen play 7on7, but that’s not what they’re used to doing.

“If we’re going to play full-on, we have to get kids ready for contact. Waiting to the last minute to decide makes that hard to do.”

Whatever the final decision turns out to be for the season, coaches and players agree — they’re ready to hit the field one way or another.

“There’s nothing like Friday night lights, your 11 guys against their 11 guys,” Layne said. “Obviously, this has been pretty frustrating. I’ve been waiting my whole high school career to get an opportunity to play. I’m ready whenever we roll, and whatever happens, we’ll make the best of it.”

“Simply answered, if the coach is enthusiastic and optimistic, 7on7 is well received. As coaches and leaders, part of team building is creating a unifying vision of a hopeful future. If we know who we are, what we face, and that together we can accomplish our objectives, student-athletes are resilient and adapt well to change.”

“If Oregon is not allowed to play, I will be extremely disappointed. I really don’t know what my response will be to something else at this point in time.”

“I’ve got a list of questions that we have no answers to. For one, how do you travel and play teams in counties in a higher-risk category? There’s not been a lot of direction, just a date that’s been established.”

“Is 7on7 better than nothing? From a standpoint of getting kids moving, yes. But you’re not getting better in what you do. You don’t run the offense and defense that you run. You’re running a 7on7 offense. 7on7 isn’t football. My biggest concern is that there’s not going to be anything alongside 7on7 for the linemen. If we don’t have anything for linemen, I’d look into something on our own or with other schools with the same mindset.”

“Finding ways to give seniors an experience is important. What that looks like is still to be determined. Hopefully, it’s 11v11 as we know it. If not, then these other options pose different challenges. We’ll embrace whatever options we have.”

“As much as I want to see us back on the field, I care more about my Aloha community and its safety than about one game, one practice.”