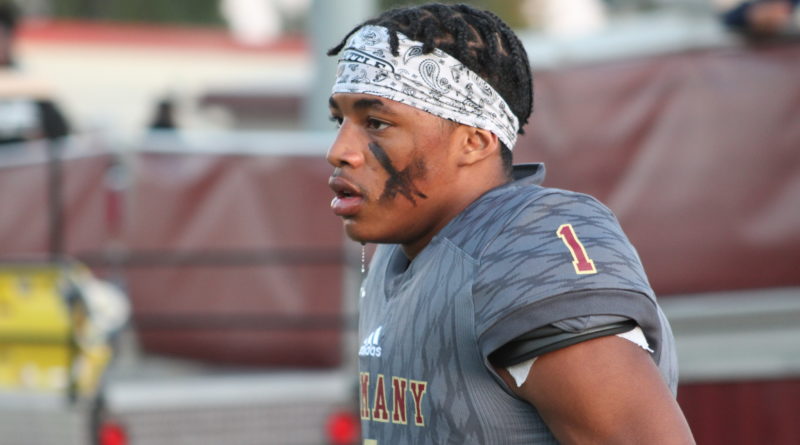 SBLive California is previewing the Top 50 high school football teams in the state ahead of the 2020-2021 season. Even with the season on hold, we will continue to highlight the best teams, players and coaches in California. Here’s an inside look at the Alemany Warriors of the CIF Southern Section, the No. 13 team in our countdown.

Coach Clausen: “Jaylin is one of our top athletes and top football players. He’s one of the best in the country. He’s played all over for us.”

Coach Clausen: “Kevin has started for us since his freshman year. He’s going to play receiver and defensive back for us this year. There are a lot of colleges recruiting him both on offense and defense. He’s been tremendous for us the last couple of years.”

Coach Clausen: “Junior started for us as a freshman as well. The reason we were so excited about this season was because a lot of our top players who had their introduction to high school football as freshmen are now juniors. I see Junior as the top inside linebacker in the country for 2022.”

Coach Clausen: “Eduardo is a three year starter for us on the offensive and defensive line. He’s one of our better interior lineman.”

Coach Clausen: “Floyd started for us as a freshman. He’s one of the top running backs on the West Coast.”

Clausen will have to find a new quarterback at Alemany following Miller Moss’ early enrollment at USC:

“When we knew Miller was leaving, Finn Collins checked in as did Dylan Gebbia, so they were both going to compete. Finn is now an early enrollee at Arizona State so it’s going to be Dylan. We think Dylan has tremendous upside.”

HOW COVID-19 HAS AFFECTED ALEMANY FOOTBALL

COVID-19 has affected every high school football team differently. Coach Clausen shares how COVID-19 has impacted Alemany football over the past several months:

“The biggest thing is mental health. These kids are are used to waking up every morning and being in a normal routine. They’re used to being around their friends, teachers and coaches. I can’t sit at a computer for two hours, never mind five hours that they’re doing for school.”

“Not every kid who’s playing at Alemany comes to play college football. Some are here to be a part of something that they love or to hang out with their friends at practice. Everyone is talking about the lack of games and how it affects recruiting, but the bigger thing for me is the psyche of these athletes, that whole aspect of it.”

“It’s not easy, nothing is easy right now, but other states have shown a season can be managed and it can be done. I really feel for the kids here who it looks like aren’t going to get that opportunity. This is so tough on everybody.”

“We have some seniors on this team that are considered “fall evals” which means colleges coaches like them, but wanted to see more from them in the fall. A season at any point really could help these guys. “

“We’re going to start conditioning back up again next week to get our kids out of the house and to see them. I’m really looking forward to it.”

Alemany’s only question mark is at quarterback. If the Warriors had played in the fall, Finn Collins would have been the quarterback and Alemany would most likely have been a Division 1 playoff team in the Southern Section. How Dylan Gebbia performs will determine Alemany’s level of success if games are played in 2020-2021. Alongside Chaminade and Sierra Canyon, Alemany is right up there with the cream of the crop in the San Fernando Valley.

If Alemany is able to play some type of season and can maintain a tough strength of schedule, then their most realistic scenario is to win/be competitive in every game. The Warriors are clearly one of the top teams in the state.

“In a normal year I thought we would have had the opportunity to compete with the elite of the elite this season. That’s why we had such a tough schedule starting with Helix and then St. John Bosco. That Bosco game was going to tell us real quick are we a top five team or a top 15 team?”

“Then we had Oaks Christian who was going to be good this year and Mission Viejo who was going to be top five and then finish up with Lawndale. I thought that with the group coming back, there was a reason why we scheduled the teams we scheduled: to see where we are in year three. Our league is really good, but we wanted to ramp things up even more. We wanted to set the bar to show that we’re one of the top teams in the state. Playing Helix, St. John Bosco and Mission Viejo was going to tell us exactly where we’re at.”

“We finally felt like we had the guys to compete up front. Our greatest strengths this season are our offensive and defensive lines. Every single kid in our defensive front seven is a Division 1 kid. Our offensive line is experienced too. That’s what you need to have to compete with the big boys. We feel like we can compete with anyone. We may not win every game, but we’ll compete in the trenches.”

“I really like our running backs and our secondary too. I think we have a tremendous group there. RJ Jones is a special player for us in the 2023 class at safety. We don’t have any depth at quarterback and at wide receiver we’re young. I’d like to build some more depth there.”