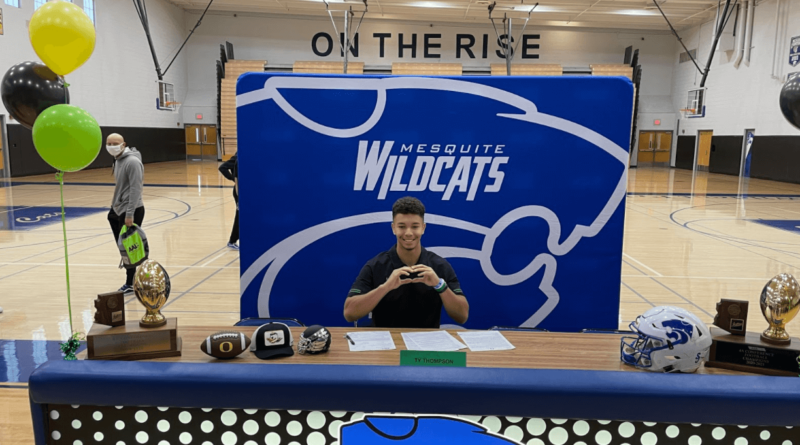 Ty Thompson, one of the top quarterbacks in the nation’s Class of 2021, has officially inked his name with the University of Oregon, putting a cap on the Ducks’ impressive Arizona signing haul.

The Mesquite High School star is one of four elite players from the valley headed to Eugene to play for one of the country’s top college football programs, both creating a pipeline for more future recruiting by Oregon in the state and helping to solidify Arizona as a high school football hotbed.

“Arizona’s definitely not to be slept on,” Thompson said. “We’ve got a bunch of great talent out here, and it shows how well Oregon recruits. We got pretty much all of the top players to go to Oregon.”

“I think Arizona football is, really, big-time football,” Mesquite coach Scott Hare said. “I know California, Florida and Texas are still going to get their deal, but think of how much bigger and how many more high schools there are in those three states. If you take Arizona being a little bit of a smaller state compared to those three, we’re rivaling anybody.”

Thompson’s outstanding performance against some of the state’s other top programs made the four-star prospect perhaps the most coveted player in Arizona’s senior class. His explosiveness and sheer talent drew national attention, helping him become the sixth quarterback and among the Top 40 players in 247Sports’ nationwide rankings.

After making his commitment to the Ducks official during a ceremony in the Wildcats gym Wednesday afternoon, Thompson said he cannot wait to get the next phase of his football career underway.

“They’re a great team, a great school, as well as a great football program,” Thompson said of Oregon. “They’ve got everything.”

Thompson had been reaffirming Ducks fans for weeks that he was still fully committed to the school despite offers continuing to roll in from other powerhouse programs. He chose Oregon over LSU, Wisconsin, Iowa and others because he wanted to stay on the West Coast, and he feels the Ducks are the best fit for him.

“I really love the coaches and the culture, what they stand for up there and how they treat their players,” he said. “The way they do things up there is just different from everyone else.”

Along with Thompson, tackle Bram Walden of Saguaro (Scottsdale), guard Jonah Miller of Sahuaro (Tucson) and linebacker Brandon Buckner of Chandler also signed letters of intent with Oregon on Wednesday. Walden and Miller, both four-star players, are among Arizona’s top five recruits, and Buckner is a three-star ranked 13th in the state.

“Oregon right now is on the rise. They’re definitely going to be a Top 10 school when (Thompson) gets there,” Hare said.

“This recruiting class with Ty and the rest of the guys coming in, Oregon could be playing for a national title here in the next couple years.”

Unfortunately for Miller, Sahuaro is located in southern Arizona, an area that opted out of participating in most of the fall season because of COVID-19 conditions. Walden’s season ended abruptly when his team had to forfeit its first game of the Open Division playoffs because of an outbreak.

Buckner (Open) and Thompson (4A), though, led their teams to repeat state championships. Buckner helped the Wolves — ranked No. 3 nationally in the SBLive Power 25 — win their fifth consecutive state title Saturday night with a strong defensive performance against Hamilton. Thompson helped rally Mesquite to a second straight crown with a dramatic two-point conversion pass in the closing seconds to stun Cactus in Friday’s 4A state final.

Hare said the Ducks are getting a true gem in Thompson — a quarterback who is able to stay calm, poised and incredibly focused during high-pressure situations and on late-game, must-score drives.

“I think they (Oregon fans) are going to learn real fast that he’s going to stay the course the whole game and it’s not gonna matter,” Hare said.

While Hare is excited to see players such as Thompson go to top-caliber programs, he also said it would be nice if the local schools would get a bit more of a jump on recruiting players in the state in hopes of seeing more of those stars stay home.

“Schools are coming in here right now and taking our kids, and I would hope in-state recruiting ramps up more,” he said.

He is happy, however, that there will be an opportunity to see Thompson and the others play in the state at least once each year when the Ducks visit Arizona and Arizona State. Both Los Angeles schools are only a short road trip away, too.

“It will give his family and friends the opportunity to watch him play some college ball,” Hare said. “If he had gone (farther) away, it’s a little bit harder.”

Thompson is one of several Arizona seniors who will be graduating high school early and departing for college over winter break. He’s set to make the trek to Eugene in less than two weeks, along with Miller and Walden. Buckner will wait until summer to join them.

Hare knows how he’ll remember the star quarterback’s days with the Wildcats.

“He’s a winner,” Hare said. “If you put the ball in his hands late in the game, he’s gonna find a way to get it done.”