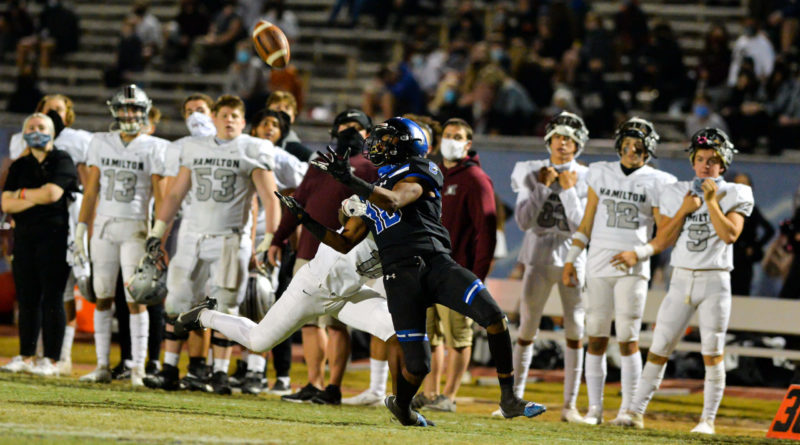 In Arizona, the state’s overall top eight teams duke it out in a separate playoff bracket, leading to more competitive games at every level, in every round

By René Ferrán | Photo by Will Edmonds

Two years ago, while the Arizona Interscholastic Association searched for ways to make its football playoff system more exciting and equitable, it hit upon a novel concept.

The AIA decided to implement an Open Division playoff, which takes the top eight teams from Class 6A, 5A and 4A according to a ranking system of all teams in those three classifications and puts them into one tournament.

The remaining teams in 6A, 5A and 4A still compete for state championships in their respective classifications, with seeding reordered to account for the removed teams.

With the Open Division debuting last fall, two schools (Liberty in 6A and Mesquite in 4A) won their first state championships. Chandler defeated Saguaro 42-35 in the Open final after each won competitive semifinal games against Salpointe Catholic and Hamilton, respectively.

The change also accomplished the goal of having more competitive playoff brackets throughout the four rounds:

Could such a playoff system work in Oregon?

Right now, state officials, working with football coaches and athletic directors, are focused on coming up with how a 2020-21 football season will look, already moving the schedule to March 2021 because of the COVID-19 pandemic.

But what about down the road? One of the sport’s current deans, Jesuit coach Ken Potter, sounded intrigued by the idea.

“I would be in favor of it,” said Potter, who has won 323 games and four large-school state titles during his 33-year career. “Mainly because it allows more teams opportunities to be a state champion.”

On the other side of the equation, coach Justin Starck of two-time reigning 5A champion Thurston wasn’t sure of its value.

“Very few 4A or 5A teams would be able to compete with the 6A powers,” he said. “And we all value league champions being placed in the tournament.”

Brad Garrett, assistant executive director of the Oregon School Activities Association and its football director, said that while the Football Ad Hoc Committee has discussed the notion of an Open Division, it has never been formally considered.

Beaverton coach Bob Boyer discussed a proposal that had been bandied about, with the 32-team 6A state playoff bracket being split into two 16-team brackets — an A bracket with the top 16 seeds and a B bracket with seeds 17-32. The proposal didn’t make it out of committee.

“More teams would have had a chance, and it would bring out more fans who thought their team had a chance instead of the no-shows for the probable blowout to happen,” Boyer said. “I’m not sure how many times a 5A top team can compete with our top six to eight 6A teams. Those teams are loaded with either general talent or lots of money. Money is the great separator.”

Mountainside coach has seen both sides of coin

One coach with plenty of perspective on the idea of an Open Division playoff is Mountainside coach John Mannion. Mannion coached in California in the late 1990s and early 2000s, when that state made changes that allowed teams to opt into higher divisions.

He also coached at Silverton for seven seasons (2010-16), reaching the 5A final in 2014 and the semifinals the previous two years.

While in California, his Foothill team won North Coast Section 2A East Bay titles in 1993, 1994 and 1999, then opted up to 3A the next year and won the East Bay title again.

At that point, he and his staff decided to take the ultimate plunge and opted up to 4A, where in the next three seasons, his teams made the semifinals twice during a time when De La Salle won 28 consecutive section titles.

“If we’d stayed at 3A, we probably would have had a shot to win another title or two,” Mannion said.

He pointed out that while at Silverton, he felt his team might have competed with “a lot of 6A schools,” but he’s glad that he didn’t have to take his Foxes into an Open Division against them.

“Wanting to challenge yourself is a good thing, but it can be bad, too,” Mannion said. “Different teams from year to year could certainly hold their own. But the other part of it is when you have a 5A team like Thurston last year, with a great group of seniors that won a state title. They played like-sized schools and had something special to remember.

“If they got tossed into an Open Division, maybe they don’t win it. They get knocked out and don’t experience a title. So, I can definitely see both sides.”

For more than a dozen years, California has had an Open Division in which the California Interscholastic Federation selects the top teams from the northern and southern halves of the state to play in the CIF State Championship Open Division Bowl Game.

Unlike California, Arizona used its AIA rankings to determine the eight Open Division qualifiers. The AIA tweaked its rankings, modeled after MaxPreps’ ranking system, to account more for past performance and not to predict future results.

While the Open Division has many proponents in Arizona, there were other coaches who felt at the time of its passage that it cheapened titles won at other classifications.

“I don’t like the idea,” Perry coach Preston Jones told the Arizona Republic in December 2018. “If I’m the No. 9 team and win a 6A state championship because the top eight teams get put into another playoff system, I don’t think I would feel real good about it.

“I also wouldn’t feel real good going to the Open playoff system and getting beat and watching a No. 9-24 team winning a 6A state championship.”

Using the MaxPreps rankings from before the OSAA state playoffs in 2018 as a model, an Open Division bracket that year would have looked like this:

The only non-6A school to make the cut would have been Wilsonville, although Churchill at No. 10 was close. Depending on how the OSAA might tweak the rankings to more closely match how Arizona ranked its schools, Churchill might also have made the field.

One team noticeably absent from the final regular-season 2018 MaxPreps rankings: Thurston, which was not among the top 25 teams that year but went on to win its first state title.

“There are always some good 5A schools that could compete, but I don’t know about the 4As,” said Sherwood coach Greg Lawrence, whose teams won 5A titles in 2010 and 2012, but since moving up to 6A in 2014 has reached the semifinals only once. “Getting those other schools to buy into it, I don’t know if it will happen.”

Also absent from the Open Division based on MaxPreps’ rankings were Liberty and Central Catholic, which both were seeded higher than Tualatin in the 6A playoff bracket that year.

The Falcons and Rams would have become the Nos. 1 and 2 seeds in the 6A playoff field, while seven schools would have made the bracket to replace the seven Open qualifiers: Roseburg, Gresham, Mountainside, Sprague, Century, Westview and Glencoe.

That would leave only seven 6A schools that didn’t qualify for the postseason, which might increase calls to cull the playoff field.

With Wilsonville out of the 5A bracket, South Eugene would have moved in.

Moving teams between classifications could negate need for Open Division

Garrett agrees that getting the buy-in from member schools to create an Open Division — whether for the top two or three classifications — would be the biggest challenge to implementing the playoff format in Oregon.

In the meantime, his focus is on continuing the system of moving schools up and down a classification every two years for competitive and safety reasons. He said the Football Ad Hoc Committee identified and provided the option to at least 45 schools over the last four-year block to move down a classification, while programs such as Hidden Valley, last year’s 3A state runner-up, get bumped back into their actual classification.

Arizona has a similar system in place to move schools up or down each year, but schools can play several classifications higher in football than they do in other sports.

Saguaro and Salpointe Catholic, for instance, moved up from 4A to 5A this fall in football, and Saguaro could end up playing 6A by 2021.

By 2022, all the top Arizona teams conceivably could end up in 6A for football, which could make the idea of an Open Division there moot.

In Oregon, though, with schools always playing either in their classification or the one below, you could get the best of both worlds — teams moving down experiencing success and perhaps making the playoffs, while the best of the best duke it out for the title of Open champion.

“I think the competition in the Open Division would be fierce from Round 1 to the final,” Potter said. “It would also change the first round of our playoffs that often are so lopsided. It’s a nice concept.”