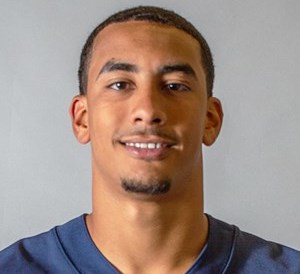 Former Liberty High School (Bakersfield) star quarterback Jordan Love was drafted by the Green Bay Packers Thursday in the first round of the 2020 NFL Draft.

Love, who played three seasons at Utah State, was selected with the No. 26 overall pick. He was widely considered one of the top five quarterbacks coming into the draft and several mock drafts had him going as high as No. 17.

Green Bay traded with the Miami Dolphins to move up from pick No. 30 to draft Love. The Packers are clearly looking for an eventual successor for future Hall of Famer Aaron Rodgers, who turned 36 in December.

Love was an under-recruited prospect out of Liberty in 2016, and Utah State was the only Division I school to offer him a scholarship. Rodgers has a similar story as an unheralded high school recruit out of Pleasant Valley High School in Chico.

Love, 21, passed for 2,148 yards and 24 TDS and ran for 806 yards and eight TDs during his senior season, leading the Patriots to their first-ever Central Section Division I championship.

What they’re saying: “Challenging evaluation for quarterback-needy teams balancing traits and potential against disappointing 2019 tape. Staff turnover and new starters across the offense are partly to blame for his regression, but self-made flaws in process were also concerns. Love’s accuracy took a step back, and his delayed reaction from “see it” to “throw it” when making reads is troubling. He has the arm to stick throws into tight windows but needs better eye discipline and anticipation to keep windows open. His size, mobility and arm talent combined with his 2018 flashes could be a winning hand that leads a team into the future or a siren’s song of erratic play and unfulfilled potential.” — NFL.com analyst Lance Zierlein