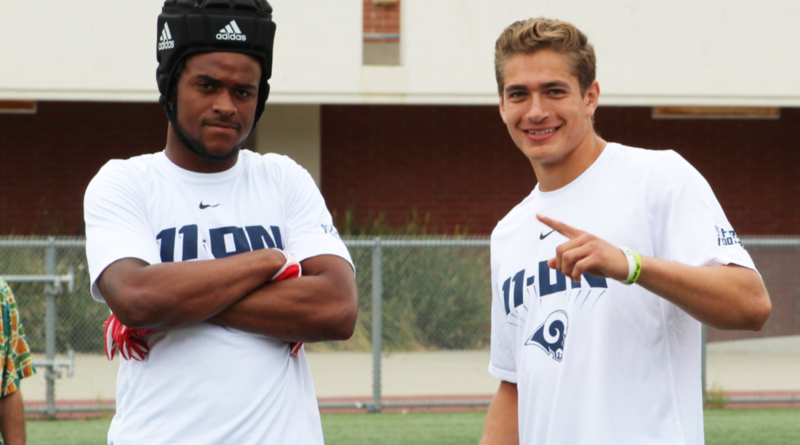 Bullock intercepted six passes as a sophomore. This offseason he’s played on both sides of the ball for Muir in seven-on-seven and has dominated defensive backs as a receiver. Bullock didn’t play too much wide-out as a sophomore, but should get more opportunities in 2019.

Jackson caught 14 passes for 304 yards and three touchdowns in 2018. He made 64 tackles and picked off three passes on defense. The rising senior was a big part of Lawndale’s state championship run. His 6-foot-2 frame makes him a fantastic college prospect. He has scholarship offers from Cal, Washington and UCLA.

Figgins has had the injury bug throughout his high school career, but he’s healthy and ready for his senior season. He caught everything thrown his way at the Conejo Classic seven-on-seven tournament earlier this summer. The Oregon commit stands at 6-foot-6 and weighs 225 pounds.

Berry is one of the best run-stuffers in Southern California. The LSU commit suffered a serious injury in Narbonne’s state bowl game defeat to Cathedral Catholic a year ago and will hopefully be ready to play in the Gauchos’ opener against Buchanan next month. He had seven tackles for loss in 2018.

Football runs in the Calvert family. Ethan’s oldest brother Bo plays linebacker at UCLA. His middle brother Josh plays linebacker for Washington. Ask either of the older Calvert’s who they think will become the best football player in the family and they both will say Ethan. In 2018, Ethan caught a touchdown on offense and had 41 tackles and three sacks on defense for Oaks Christian. The Lions’ linebacker partnership of Calvert and Mister Williams will be one of the best in Southern California in 2019.

Humphry has exploded onto the national scene this offseason. He started the spring without any scholarship offers, but performed so well at the Opening regional camp in Oakland that he earned an invitation to the Opening Finals in Frisco, Texas. He returns to a Muir team that will be loaded at the skill positions in 2019. In addition to Humphry, opposing teams will have to game plan for CB/WR Jamier Johnson and CB/WR Calen Bullock.

Wallace transferred to Cathedral from Paramount for his senior season. Last year for the Pirates, Wallace caught 36 passes for 769 yards and twelve touchdowns. He rushed for two more scores and on defense made 33 tackles and recovered two fumbles.

Jones will once again be one of the main pieces in a loaded Narbonne secondary in 2019. The Stanford commit intercepted two passes, made 57 tackles and had two sacks a season ago for the Gauchos.

Football might not even be Vaughn’s top sport. He also plays baseball for St. John Bosco and is a two-way MLB prospect at third-base and as a pitcher. He wants to play both sports in college. In football, he holds scholarship offers from LSU, Penn State and UCLA.

Lawndale coach Travis Clark called Tuipulotu, “a coaches dream,” in an interview with 247Sports.com a year ago. The senior defensive end has a great motor. He had 24 tackles for loss and nine sacks in last season’s state championship campaign for Lawndale.

Tupe played on both the offensive and defensive lines for Mater Dei in 2018. The senior-to-be made a critical fourth down tackle in the Monarchs’ win against IMG Academy last year. He was also part of an offensive line that only allowed one sack in Mater Dei’s state championship win against De La Salle.

The Oregon commit caught 37 passes for 670 yards and seven touchdowns in 2018. Defensively, he had two sacks and a fumble recovery. Navarrette has incredible potential. He’s 6-foot-3 and weighs 235 pounds. Scouts say he could play on either side of the ball in college. He’ll be a huge piece for a Norco team that has high expectations for 2019.

Metcalf will play left tackle this season for the Braves. At the next level, the Stanford commit projects as a guard or a center. St. John Bosco head coach Jason Negro describes Metcalf as, “a total hard-hat, lunch pail kind of guy.” He goes out every game and does his job.

Stroud threw for 2,343 yards and 19 touchdowns as a junior. This offseason, the quarterback won the Elite 11 MVP award at the Opening Finals, a very prestigious honor. Past Elite 11 MVP’s include Tua Tagovailoa, Jameis Winston and Matt Stafford.

Holden transferred to Narbonne from St. Frances Academy in Baltimore this offseason. He is committed to Alabama and joins a Narbonne receiving corps filled with talent. He’ll line up alongside Josh Jackson, Elijah Queen and Eren East.

Esteen caught 21 passes for 358 yards and six touchdowns in 2018. Defensively, he made 90 tackles and had eight interceptions. Esteen has 19 career picks. Seven more interceptions as a senior and Esteen would have the fourth most career INT’s in Southern Section history.

Redman caught 54 passes for 589 yards and nine touchdowns as a junior. He is committed to Washington where he’ll suit up with Corona Del Mar teammate, quarterback Ethan Garbers.

Jackson caught 50 passes for 915 yards and eight touchdowns as a junior for Narbonne. He is committed to USC.

Farrell showed off his versatility last year in Oaks Christian’s 56-14 regular season win over Bishop Alemany. He hauled in a 56-yard touchdown pass before scoring on a 44-yard punt return minutes later. Two years ago, Farrell finished his sophomore season with 1,168 receiving yards for the Lions. The playmaker is committed to Stanford.

Moss had a big sophomore year for Alemany throwing for 2,714 yards and 19 touchdowns. He’s seen his recruitment blow up this offseason. The junior-to-be holds offers from Alabama, Auburn, LSU, Michigan, UCLA, USC and a handful of other Division I schools.

Sitting behind Elias Ricks and Darion Green-Warren a year ago prepared Davies for this upcoming season. When he got chances to play for Mater Dei, he took them, especially in the playoffs. Davies made seven of his ten pass deflections in the Monarchs’ final three games. Both Ricks and Green-Warren have transferred out of Mater Dei which means Davies will lead the Monarchs’ secondary in 2019. This spring, the rising junior has received scholarship offers from some of the nation’s top programs.

Alefosio did a little bit of everything for Villa Park in 2018. He rushed for six touchdowns, caught 28 passes for 427 yards and four scores, amassed 552 yards as a kick and punt returner bringing back four for touchdowns and intercepted three passes on defense. He returned all three INT’s for touchdowns.

The Fresno State commit threw for 3,161 yards and 38 touchdowns in 2018. Casey will once again have the luxury of finding receivers Johnny Wilson and Jermaine Burton this season. The Coyotes will have one of the best offenses in the nation in 2019.

Flowe had 67 tackles, ten for loss and eleven quarterback sacks in 2018. Most Southern California football fans know Jonathan’s older brother Justin, one of the top linebackers in the 2020 class. Jonathan is following in his brother’s footsteps and has already emerged as one of the best LB’s in the 2021 class. He holds scholarship offers from just about every top college program in the country.

Hutson caught 46 passes for 844 yards and 13 touchdowns a season ago. He also returned two kickoffs for scores. Hutson is committed to Oregon.