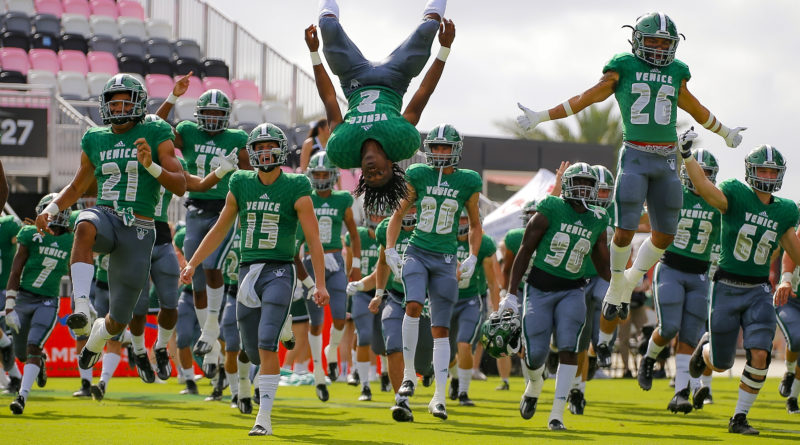 Now it’s time to hand out some awards. Here are SBLive’s 2021 Florida high school football all-state awards, including players of the year for every classification. The awards were compiled by Ross Van De Griek.

Browne came to Venice from Sarasota Riverview last summer and led the Indians to their third state title in school history, and first since 2017.

Nolton finished tied for second in the state in sacks (25.0), as well as racking up 111 total tackles, and 5 forced fumbles. Nolton led the Raiders to a regional final berth, where they lost to eventual Class 3A champion Chaminade-Madonna.

Henry was the top receiver in the state of Florida as far as receiving yards (1,590), averaging 122.3 yards per game. Henry finished with 14 total touchdowns (13 receiving, 1 rushing) leading the Panthers to a 9-4 record in 2021, before losing to Buchholz (Gainesville) in the regional final.

If you didn’t know the name OJ Ross from Cocoa High School before the season, you should know him by now. “Ross is a generational type of talent at such a young age,” Cocoa head coach Ryan Schneider said following their state-championship game vs. Cardinal Gibbons last month.

One year ago, Champagnat Catholic quarterback Ennio Yapoor was an eighth grader playing in the backup quarterback role to Tyous Taylor who led the Lions to their fourth state title in 2020.

This season, Yapoor was the starting quarterback and finished the season with 3,830 total yards (3,300 passing, 530 rushing) and 37 total touchdowns (26 passing, 11 rushing). The Lions finished the 2021 season with a 10-3 record and lost to Trinity Christian Academy in the state championship game last month.

Jesuit High School’s football program was not only nationally ranked for the entire season, but the Tigers also won their first state championship in 53 years, defeating Pine Forest 35-29.

Matt Thompson led the Tigers to impressive wins over nationally ranked St. Thomas Aquinas in September and Tampa Catholic for the 22nd year in a row in November.

1A Player of the Year: Amari Jones, QB, Bradford

1A Coach of the Year: Mike Coe (Madison County)

2A Coach of the Year: Hector Clavijo (Champagnat Catholic)

3A Player of the Year: Kenyatta Jackson, DE, Chaminade-Madonna

3A Coach of the Year: Dominic Ciao (Berkeley Prep)

4A Player of the Year: OJ Ross, RB, Cocoa

4A Coach of the Year: Matthew DuBuc (Cardinal Gibbons)

5A Player of the Year: Orlando Holland, DE, Baker County

5A Coach of the Year: Roland Smith (Miami Central)

6A Player of the Year: Joquez Smith, RB, Jesuit (Tampa)

6A Coach of the Year: Matt Thompson (Jesuit)

7A Coach of the Year: Jayson Roberts (Tampa Bay Tech)

8A Player of the Year: Ryan Browne, QB, Venice

8A Coach of the Year: John Peacock (Venice)