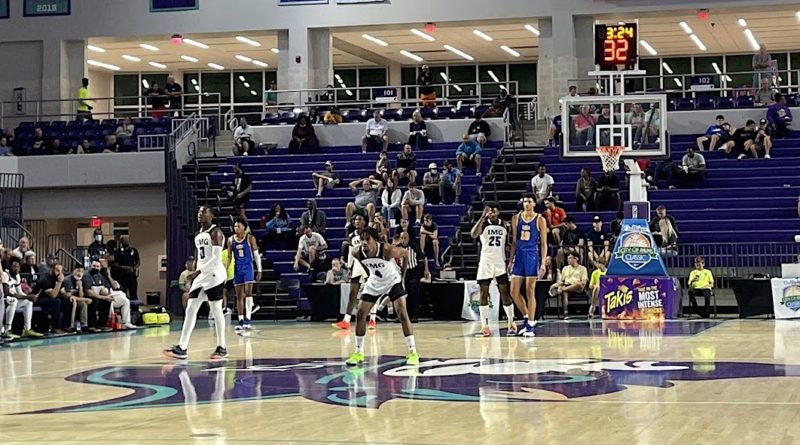 FORT MYERS, Fla. – The championship game is set for the 2021 City of Palms Classic – Oak Hill Academy vs. Montverde Academy.

Here are four takeaways from Tuesday night’s semifinal round, which featured an impressive win by Oak Hill as they knocked off the No. 1 team in the country.

After trailing by as many as 11 points, Oak Hill, ranked No. 20 in the nation in the SBLive/SI Power 25 Rankings, rallied to beat No. 1 IMG Academy, 76-72. The Warriors were led by Kentucky signee Chris Livingston who scored 22 points and had a team-high 7 rebounds in the win.

The Warriors also got 19 points from senior guard Judah Mintz, who scored eight of those points in a 20-second stretch to end the third quarter.

Oak Hill Academy will face Montverde Academy in the City of Palms championship game on Wednesday at 8:15 p.m. ET.

Keyonte George is a prolific scorer

Despite the loss to Oak Hill Academy, George was impressive with a game-high 24 points – including 17 in the second half.

George, a Baylor commit, also added a game-high 9 rebounds and was 6-of-9 from 3-point range tonight, hitting five of his six three-pointers in the second half.

George and IMG Academy will face Milton (Georgia) in the City of Palms third place game on Wednesday at 6:30 p.m. ET.

Indiana commit Jalen Hood-Schifino added 12 points, along with 5 rebounds in the win.

Montverde Academy turns it on

After not having a lead for the first 16 minutes of the game, Montverde Academy showed why they’re the No. 4 team in the country. The Eagles outscored Milton in the second half 36-20 to run away with the victory.

The Eagles are seeking their fifth championship at the City of Palms Classic, which is the most in the tournament’s history. Westchester High School in Los Angeles has the second-most with three titles.