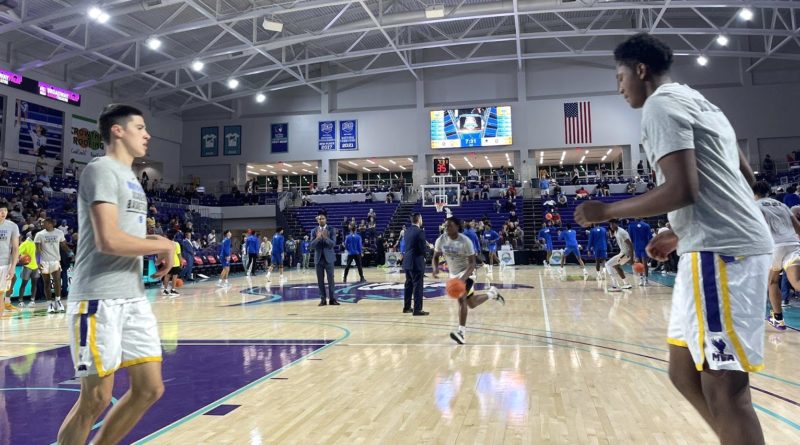 The No. 4 team in the SBLive/SI Power 25, Montverde Academy was dominant from the opening tip as they defeated the Orlando Christian Prep Warriors 75-34. The Eagles were led by Duke commit Dariq Whitehead who finished with a game-high 18 points, 4 rebounds and 4 assists.

Best game of the night? Milton vs. Calvary Christian Academy

The most entertaining game of the night featured the Milton Eagles (Georgia) vs. the No. 15 Calvary Christian Academy Eagles. Led by Ohio State commit Bruce Thornton, who finished with a game-high 22 points, Milton pulled out a 67-62 win. Senior guard Chase Cormier added 19 for Millton.

Milton will face No. 4 Montverde Academy in the City of Palms semifinals Tuesday night at 9 p.m. ET.

In the final game of the night, the North Little Rock (Arkansas) Charging Wildcats took on SBLive/SI’s top-ranked team, the IMG Academy Ascenders. And it wasn’t close.

The Charging Wildcats, who came into the game ranked No. 10 in the SBLive/SI Power 25 rankings, were led by senior forward and Oregon commit Kelel Ware, who finished with 22 points (10-15 from the field), 18 rebounds and 2 blocked shots. Arkansas commit Nick Smith added 12 points, 5 rebounds and 4 assists in the loss

The Ascenders were led by senior guard Eric Dailey, who finished with a team-high 17 points, followed by Houston commit Jarace Walker with 16 points and Michigan commit Jett Howard with 11 points.

The Ascenders will take on No. 20 Oak Hill Academy (Virginia) in the City Of Palms semifinals Tuesday at 7:15 p.m. ET.