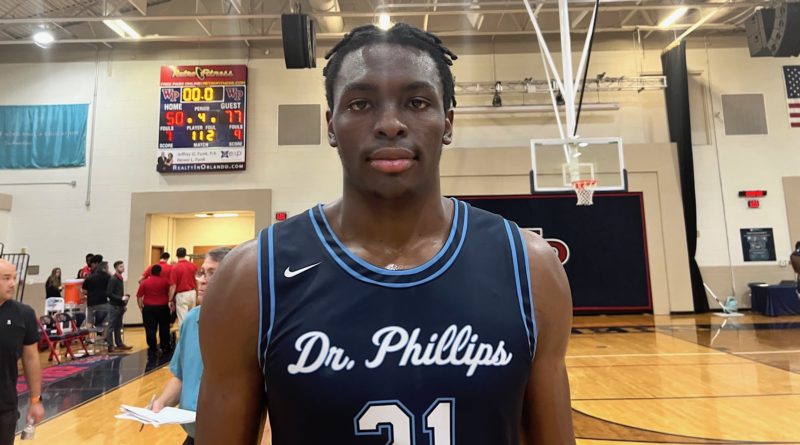 WINDERMERE – Dr. Phillips lived up to its billing as one of the best high school boys basketball teams in the nation, using its pressure defense to run away from Windermere 77-50 on Saturday night.

One of the most athletic teams in the country, Dr. Phillips came into the game ranked No. 18 in the SBLive Power 25. The Panthers came out Saturday night and played full court, in your face, menacing defense.

That effort was led by Kansas recruit Ernest Udeh, Jr., with all 6-foot-10 of him at the point of their attacking 1-2-2 full court press. Early on, Windermere Prep withstood two consecutive power dunks by Udeh and despite his hustle and determination Windermere took the lead 14-6 late in the first quarter.

A barrage of threes, many of which were in transition or semi-transition, caught Dr. Phillips by surprise. Windermere Prep’s Kycen Pruett shot the ball well, as did other Lakers like Jayden Williams, who had multiple power dunks in the game, too.

As the game progressed, Dr. Phillips’ pressure defense wore down Windermere, resulting in a barrage of blocked shots, turnovers and transition layups.

Even with Williams having a good night, the amount of hurried shots was a problem for him and his teammates with Udeh in the paint. That pressure defense still provided the biggest surge.

With the score tied at 21-21 at the end of the first quarter, Dr. Phillips started to wear down Windermere Prep. More talent, more depth, more speed, and more length contributed to a 32-28 Dr. Phillips lead headed into halftime.

In the third quarter, the bottom fell out for Windermere. More turnovers from the full court press led to run-outs, like the one below from the game’s best offensive player, Mississippi State bound wing Riley Kugel.

Even with Windemere moving the ball around and playing unselfish basketball, there was suddenly a lid on the basket. By the middle of the third quarter, it became obvious that the depth of Dr. Phillips established itself and that is when the lead expanded.

Just about every Dr. Phillips’ player could drive to the basket at that point. Windermere had a hard time staying in front of anyone that wanted to drive to the hoop, and that led to one of Udeh’s seven dunks.

Windemere gave a gallant effort, but there just were too many plays where they were a step behind the action.

Kugel, along with Florida commit and point guard Denzel Aberdeen pushed the pace and that pressure defense just caused chaos. More layups and easy baskets transpired from there, extending the final margin to 77-50.