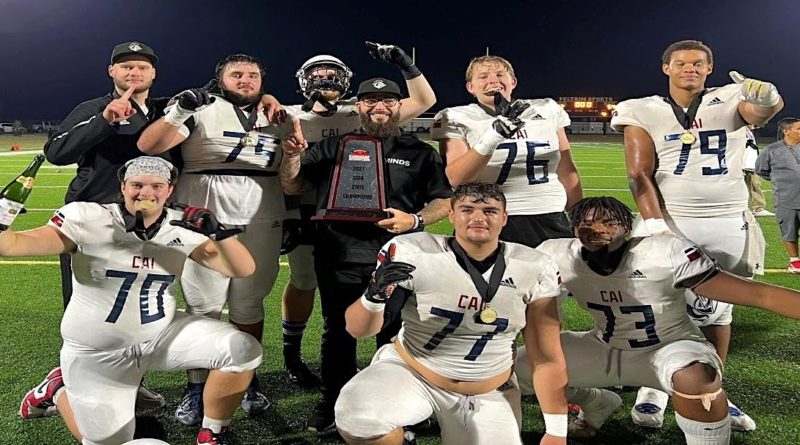 The Knights were led by senior quarterback Luca Stanzani and senior defensive back Trae Tomlinson who had four interceptions, as well as a punt return for a touchdown.

The Knights (10-2) scored early and often with Stanzani connecting on a 35-yard pass to South Alabama commit Caeleb Schlachter to give them a 6-0 lead. Following an IMG Academy turnover, the Knights wasted no time as senior running back Isaiah Adams scored on a 61-yard run, followed by a 2-point conversion to Dylan Djete to extend the lead to 14-0.

Early in the second quarter, Stanzani connected on his second touchdown pass of the night on a 9-yard pass to Djete that extended the Knights lead up to three scores. Clearwater Academy wasn’t done scoring in the first half, as Adams scored his second touchdown of the night on their next drive to give them a 27-0 lead with 4:51 left until halftime.

On the ensuing drive, The Ascenders (11-1) wasted no time getting on the board as Yale running back commit Joshua Tarver scored on a 2-yard run. The key play of the drive was a 45-yard return by Ian Barron.

Late in the first half, Stanzani added his third touchdown pass of the night connecting on a 44-yard pass to Djete to make it a 34-6 Knights lead, with 1:38 to go. Right before halftime, the Ascenders added another touchdown as junior quarterback Mason McHugh connected with Tarver for his second score of the night, on a 15-yard pass to cut the deficit to 34-14 heading to halftime.

On the Knights’ opening drive of the second half, Stanzani connected with Schlachter on a 20-yard screen and run for the fourth touchdown pass of the game from the senior quarterback. That made it 40-14 early in the third quarter. Moments later, Tomlinson was not only a threat intercepting passes but he also scored on a 49-yard punt return that put the game out of reach at 47-14.

On the ensuing Ascenders drive, McHugh added his second touchdown pass of the game, connecting with senior wide receiver Colin Howard on a 9-yard fade to cut the deficit to 47-22 with four minutes left in the third quarter. In the final minute of the third quarter, Stanzani added another touchdown pass on the night, connecting with senior wide receiver Bronte Gallo on a 22-yard pass to push the lead back up to 54-22.

Following a brief power outage in the fourth quarter, Stanzani’s night was over and junior quarterback Danny McMullen finished the game.