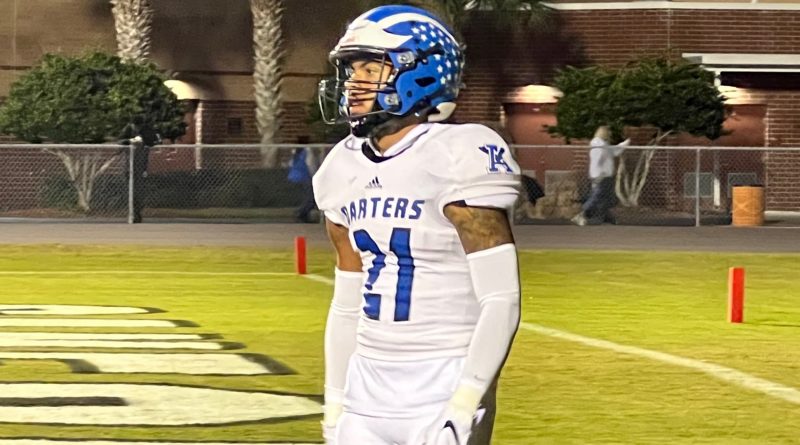 SANFORD, Fla. – If you like excitement, the Apopka at Seminole Florida high school football playoff game provided as much drama as one could handle on Friday night.

In a back-and-forth battle, four quarters were just not enough as Apopka needed overtime to pull out a thrilling 28-27 victory.

From the early moments, it was obvious that this game would be competitive throughout. Both Apopka and host Seminole were on their game, and it’s a shame one team had to lose.

After receiving the opening kickoff, Apopka’s first drive stalled and the Blue Darters punted. The fireworks started shortly thereafter. UCF safety commitment Demari Henderson then moved over to wide receiver and caught a 65-yard post pattern and ran it into the end zone for Seminole. Just like that it was 6-0 Seminole after the missed PAT.

Apopka struggled to score again, and the Seminole offense was on the move and it looked like it might take a two-score lead, but a miscommunication between Seminole quarterback Luke Rucker and 2023 University of Florida commitment Darren “Goldie” Lawrence went awry in the most important play of the entire evening.

Another UCF commitment, cornerback Nikai Martinez, picked off Rucker and took it back for a touchdown. Apopka took the lead 7-6 with the extra point.

From that moment forward, it was like two boxers throwing counter punches. Apopka went up 14-6, which was the largest lead of the contest, but it did not last long. This time Rucker and Lawrence connected and Lawrence fought his way into the end zone to tie the game at 14-14 with 5:22 left in the first half.

Right before halftime, the Apopka offense used a combination of its single-wing and the spread offense to keep Seminole off balance. The Blue Darters marched the football down the field before a clutch pass by quarterback Andrew McClain to wide receiver Quincy Frazier just inside the pylon for a score gave Apopka a 21-14 halftime lead.

The third quarter was a defensive battle. Both teams traded punts and did not get inside the opponent’s 10-yard line. Apopka missed a field goal late in the quarter, and still held a 21-14 lead heading into the final 12 minutes.

There was a chance for another big play down the sidelines, but Ja’cari Henderson, Demari’s twin brother, made a key play. Using his speed, the cornerback closed the gap and knocked away what would have likely been a touchdown catch and run.

It looked like Apopka would gain the stop it needed, but this clutch pass on the move by Rucker kept Seminole alive.

Seminole started the drive inside its own 10-yard line, and endured lost yardage plays and penalties, and finally was able to make a clutch play with just 6.9 seconds left on the clock to tie the game at 21-21.

In overtime, Rucker threw a jump ball into the corner of the end zone – and Ja’cari Henderson came down with it to give Seminole a 27-21 lead. But they once again failed to convert the PAT as the snap was never secured for the kicker.

Apopka went back to its trusted single-wing attack on its first overtime possession. The first three plays from scrimmage were all inside runs, and the football laid near the 2-yard line. Apopka then ran it up the middle again and scored the game-tying touchdown.

Apopka’s PAT was blocked, but Seminole was penalized for being offside. The second PAT was good, giving Apopka an epic 28-27 victory.