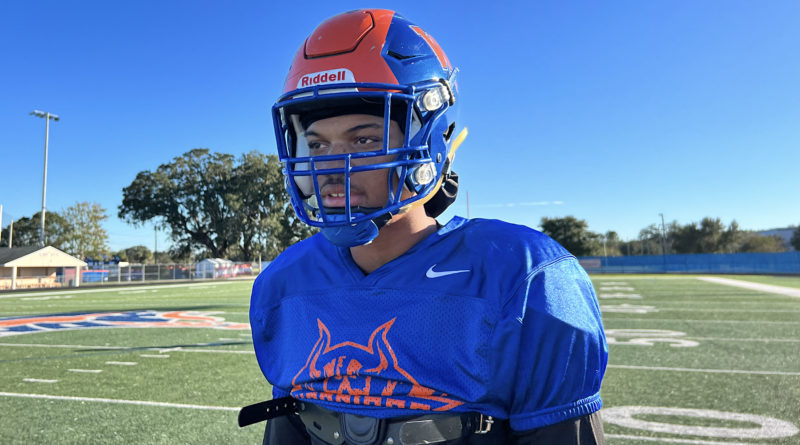 WINTER GARDEN, Fla. – As the 2021 Florida high school football playoffs enter the regional semifinals round, one of the best matchups will pit two teams against each other for the second time this season.

Here’s a closer look at the Osceola vs. West Orange rematch in the Class 8A Region 3 semifinals. West Orange beat Osceola 35-21 on Oct. 22.

How will the Warriors attempt to slow down two elite defensive linemen for the Kowboys?

National recruits John Walker at defensive tackle and Derrick LeBlanc at defensive end will not be consistently stopped with one-on-one blocks, but that does not mean that West Orange will not attempt to run the football between the tackles or on the edges of the Osceola defense with a variety of different plays.

Whether it’s a counter, a reverse, a buck sweep, or running screens against them, just about any measure to slow Walker and LeBlanc down has already been seen by these two juniors, and it’s likely to transpire again Friday night against West Orange.

With Walker’s 6-foot-4, 295-pound frame and LeBlanc’s 6-foot-5, 255-pound frame, each of them possess the physical skill to chase down plays from behind, even if the football is run away from them. What they do against West Orange is important, but their teammates need to come up big on defense as well to help slow down a good running back.

Senior running back Terrell Walden II may not be a national recruit, but he’s a talented football player that can score from 50 yards in a heartbeat if there’s a running lane. He might be the most important player for Osceola to slow down, as West Orange’s passing attack is often lethal.

If the Warriors consistently run the football with Walden in conjunction with the passing game performing at a high level, it will be almost impossible to slow down West Orange’s offense. Walden’s running ability could create some play-action passing attempts for senior quarterback Tyler Huff and allow him to add to his 21 touchdown passes this season.

Elite wide receiver Jayden Gibson paces the West Orange offense, and the Florida commit’s 6-foot-6 frame will be difficult to contain once again. The senior is one of the nation’s top overall players, and he will often draw two defenders. That creates other issues for the Osceola defense.

Gibson plays alongside talented wide receivers like Asaad Waseem, only a junior, at the slot position, and also seniors like Washington State commit Javan Robinson and Coastal Carolina commit Matthew McDoom who can line up in the slot or at just about any skill position on either side of the football. This array of talented wide receivers gives West Orange an advantage against just about any team it will face this season.

Osceola will likely cover Gibson with one of its best players, junior cornerback Bo Mascoe. That still leaves several other talented offensive weapons to tend to, and it’s going to be interesting to see how the Osceola coaching staff utilizes their defensive backs, especially seniors Kaylan Walters and Syracuse-bound safety Jeremiah Wilson.

MASCOE NEEDS TO HAVE A BIG GAME

When the Kowboys have the football, senior quarterback Chad Mascoe will be the key factor. When he’s on, he can be deadly. Mascoe will need to be on his game by spreading the football around to several different players, as well as using his legs to create plays on the edge of the Warriors’ defensive front.

If Mascoe finds a way to consistently get outside the tackle box with the option to run or pass, he could create unenviable situations for West Orange. That’s not going to be easy with defensive ends like senior Brendan Flakes, a Marshall commit, and senior Eddie Kelly, a USF commit, chasing him all night long.

Finding junior receiver Izaiah Jean-Baptiste will be a priority, as he’s not only a fast receiver, but one that possesses the quickness to make defenders miss in space.

Jean-Baptiste will likely see a bevy of different defensive backs from West Orange come at him, including the aforementioned Robinson and McDoom that can both make plays from their cornerback positions.

There’s also safety Jordan Casteel to contend with, as the junior possesses the quickness to make plays when he runs the alley or attempts to break up a pass in the deep secondary.

The other defensive back to watch will be senior USF commitment Tony Newsome. He’s capable of playing any place in the secondary, and he could be the wildcard for not only defending Jean-Baptiste, but also how he helps in run support.

Newsome is a very underrated defensive back with excellent speed. With the overall talent that West Orange possesses in their secondary, the cat and mouse game with which player(s) defend Jean-Baptiste will be fun to watch.