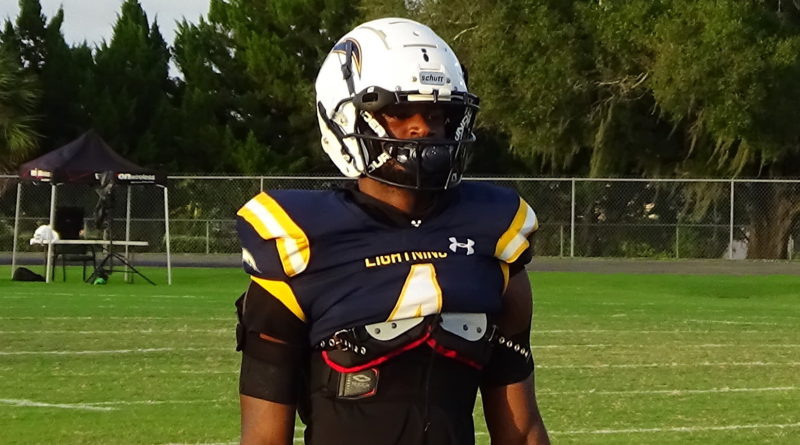 While both defenses shined for much of the evening, make no mistake that Dunbar’s 4-2-5 defense was the catalyst for the visiting Tigers overwhelming the host Lightning at the line of scrimmage. Dunbar (9-0) tackled well in space, swarmed to the football, and was only threatened by Lehigh a few times all night long.

There’s no question that Lehigh’s offense centered around Young, their junior running back. The 6-foot, 204-pound Young is a national recruit who has narrowed his focus to Oklahoma, Alabama, Georgia and Ohio State (in no particular order).

A bruising runner, Young found the going tough as Dunbar defensive linemen continuously penetrated the backfield and did not allow Young’s big frame to get going before either making him change direction or actually be hit by a Tigers defender.

The only big run for Young came during the first half on a third down and long. A basic sweep to Young resulted in a 30-yard gain out to midfield. For the rest of the evening, Young never had a run longer than 10 yards, and that all but doomed the Lehigh offense that was led by a freshman quarterback, Dorian Mallory.

Mallory had his moments with good short passes and a few runs where he decided to tuck the football and take off, but he was also bottled up, especially after the halftime break.

After intermission, that’s when Dunbar brought in quarterback Landon Winterbottom, and he made the best pass of the evening over the middle for a first down that pushed the football deep into Lehigh territory. A few plays later, Winterbottom plunged into the end zone with his 6-foot-4, 210 pound frame helping to move the pile just across the goal line. The PAT made the score 10-0 Dunbar.

As Lehigh could find no answers for blocking the Dunbar defensive line and linebackers, the frustration for the Lehigh players began to show. And then Dunbar delivered the final blow.

Faced with a punting situation, the ball flew over the punter’s head, and it set up an immediate red zone opportunity for Dunbar to deliver the knockout punch. Enter Winterbottom once again as he pushed his way into the end zone behind a surge from his offensive line. That ended the scoring for the evening, and marked the second time in a row that Dunbar held Lehigh scoreless on their home field. It was 8-0 Dunbar over Lehigh two seasons ago.

Here are a few notes from the game:

**Dunbar’s tenacity on defense needs to be commended. This team showed good fight all evening long. There was a “can do” attitude each time someone needed to take on the powerful Young during a one-on-one tackling situation.

**Despite being inconsistent with the passing attack, running back Barry White helped to pound the football between the tackles and keep the chains moving. He rarely went down with first contact.

**Even with the tough night, it was once again obvious that Young’s talent should be considered elite. He fought hard all evening long despite very little running room. He even did a nice job within pass protection when many other running backs would have gone with much less effort during an evening that saw so little success running the pigskin.

**Watch out for Dunbar cornerback Shawn Russ. The junior cornerback/wide receiver is an electric athlete that provides the length and athleticism to play just about any skill position. He was once committed to Florida but has since reopened his recruitment.

**Lehigh junior linebacker Tyre Cunningham was all over the field. He would time up blitzes, make solo tackles and just always be near the football. He’s a true football player.