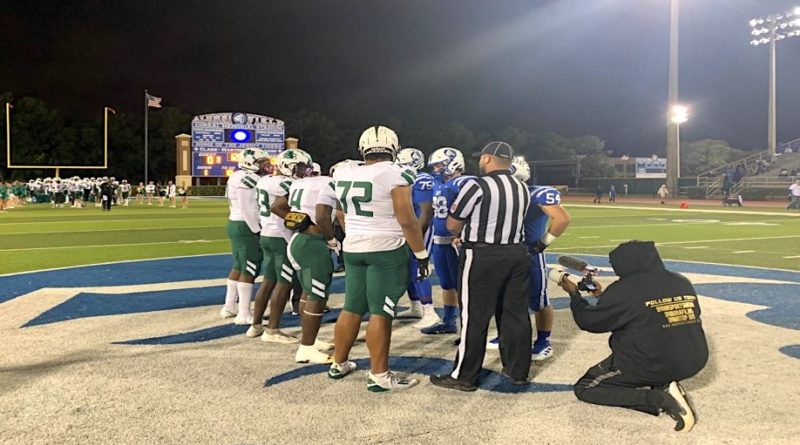 TAMPA, Fla. – Coming into Friday night’s rivalry matchup between the Tampa Catholic Crusaders and the Jesuit Tigers, the host Tigers had won 21 straight head-to-head matchups dating back to 2000.

The trend continued as the No. 12 team in the SBLive Power 25 steamrolled Tampa Catholic 42-0 at Corral Memorial Stadium in Tampa. The Tigers (10-0) have not allowed more than 21 points in any of their 10 games this season – with the one 21-point game coming in a 24-21 win over nationally-ranked St. Thomas Aquinas on Sept. 3.

After a scoreless first quarter, junior running back Joquez “Jo” Smith got the offense going for Tampa Catholic with a 3-yard run to give the Tigers a 7-0 lead early in the second quarter.

Later in the second quarter, the Tigers extended their lead to 14-0 on a 25-yard blocked punt returned for a touchdown by junior linebacker Troy Bowles, who is the son of Tampa Bay Buccaneers Defensive Coordinator Todd Bowles. The very next drive, Toledo wide receiver commit Junior Vandeross added the third touchdown of the quarter for the Tigers, this time on a 19-yard run to give them a 21-0 lead heading into halftime. The drive started with a 60-yard punt return by Vandeross.

On the second play of the third quarter, senior defensive back Caleb Williams intercepted a pass and returned it 35 yards for a touchdown as the Tigers continued to pour it on their rivals.

In the fourth quarter, Vandeross and Smith added two more touchdowns to put the game away. Vandeross scored on a 34-yard TD reception from sophomore quarterback Luke Knight and Smith found the end zone on a 1-yard run.

The Tigers’ defense stood tall when it mattered most as they held the Crusaders to four total first downs and 55 total yards of offense. The Crusaders’ big play of the night came on the final play of the first half, as junior quarterback Luke Sather connected with junior wide receiver Karmello Branch on a 20-yard pass.

“Twenty-two straight, is all I can say,” Jesuit head coach Matt Thompson said after the game. “These boys worked their tails off all night, whether it was the offense, the defense or even special teams, it was a great night all around.”

“It is good to beat your rival all four years of your high school career, but we got bigger goals than this,”said Vandeross. “The second season is just about to begin and we want to be holding that state championship trophy next month, that’s our main goal.”