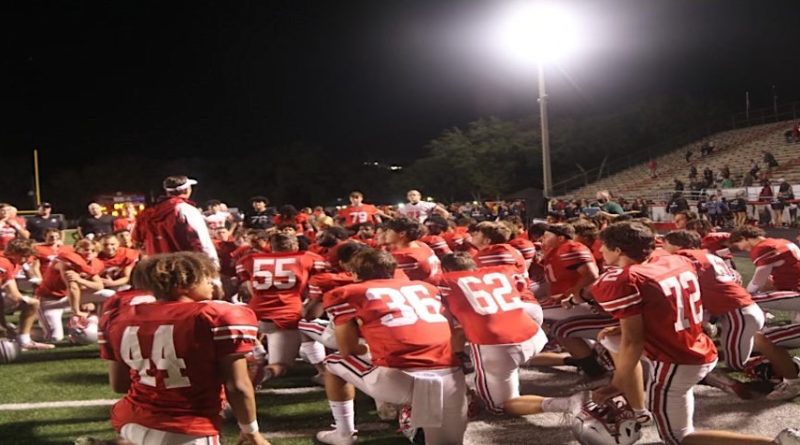 LAKE MARY, Fla. – The host Lake Mary Rams dominated on the defensive side of the ball, holding on for a 21-6 win over Oviedo on Friday night.

Coming into the game, the Rams (8-1) were ranked No. 2 in the Class 8A, Region 1 RPI Rankings, only trailing Seminole (Sanford) by .026 percentage points. Their only loss of the season came to the ‘Noles.

“Great win all around,” said Lake Mary head coach Scott Perry. “It wasn’t a pretty win but I’ll take those any day of the week.”

The Rams got on the board first on a 21-yard run by running back Jaysen Soto to take an early 7-0 lead.

“It was my first game playing at the varsity level, after spending the entire season on JV, so I wanted to make a quick impression for Coach (Perry),” Soto said after the game.

At the midway point of the second quarter, Oviedo botched a snap that the Rams recovered inside the Lions’ 10-yard line. Three plays later, freshman running back Jayden Jackson scored on a 3-yard run to increase the lead to 14-0.

Later in the first half, Lake Mary was threatening to go up three scores, but senior quarterback Gunnar Smith heaved a 40-yard Hail Mary into the end zone, which was intercepted by Oviedo defensive back Owen Aycock on the last play of the first half.

At the 7:10 mark of the third quarter, Oviedo got on the scoreboard for the first time as senior quarterback Chase Copper connected with senior wide receiver Alex Saunders on a 63-yard pass. The PAT was no good, which made it a 14-6 game.

The Rams had a quick answer as Smith connected with senior tight end Al-Nour Yacoub on a touchdown pass to make it a two score game at 21-6.

Late in the fourth quarter, Rams junior defensive back Braeden Marshall had an acrobatic interception that sealed the win for the home side.

“We committed way too many penalties, a lot of frustrating penalties as well,” Oviedo head coach Greg Odierno said. “You can’t expect to win when you commit nearly 100 yards in penalties.”

“It was a struggle for me tonight, right from the opening kickoff,” said Oviedo senior quarterback Copper. “I was missing open targets, and I have to be better if I want to lead my team to a playoff run.”