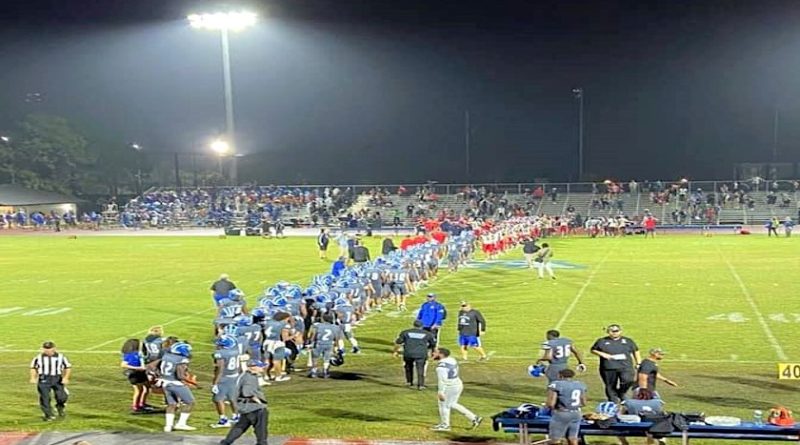 APOPKA, Fla. – On a night where the host Apopka Blue Darters honored their 2001 state championship team – to mark the 20-year anniversary of their 34-16 win over Miami Northwestern in the class 6A title game – the 2021 squad didn’t disappoint. After a 41-3 win over Lake Brantley on Thursday night, Apopka (6-2) is just one win away from clinching the District 8A-3 title.

“I got to give a huge shout-out to both our defense and offense for a dominating performance from the opening kickoff until the final buzzer,” said Blue Darters head coach Jeff Rolson.

Coming into the game, the Blue Darters were allowing just 7.4 points per game – and they improved on that mark against Lake Brantley (5-4).

The scoring started late in the first quarter, as Apopka senior running back Keyondray Jones scored on a 45-yard run to put the host Blue Darters up 7-0. Apopka’s defense held Lake Brantley to just 25 total yards and forced two punts in the opening quarter.

On the first play of the second quarter, senior two-way player Kavion Nichols returned a punt 4 yards to the house to increase the Blue Darters’ lead to 13-0.

“Once our offense got going late in the first quarter, we knew that it was going to be a good night for our offense,” said Apopka senior quarterback Andrew McClain.

Later in the second quarter, Lake Brantley got on the board on a 31-yard field goal by senior kicker Aaron Meyers to make it a 13-3 game. The Blue Darters responded quickly, marching 75 yards in just five plays, capped off by an 8-yard quarterback keeper by senior Andrew McClain that extended their lead to 20-3.

Apopka’s offense wasn’t finished. Late in the third quarter senior running back Quincy Frazier scored on a 14-yard run that extended their lead to 27-3. On the ensuing Lake Brantley drive, senior defensive end Travion Barnes forced a fumble and returned it 20 yards for a touchdown. That gave Apopka a 34-3 lead heading into the fourth quarter and put the game out of reach.

In the fourth quarter the Blue Darters turned to junior quarterback Kaleb Hicks who got his name on the scoresheet on a 2-yard TD run that pushed the lead to the final margin of 41-3.