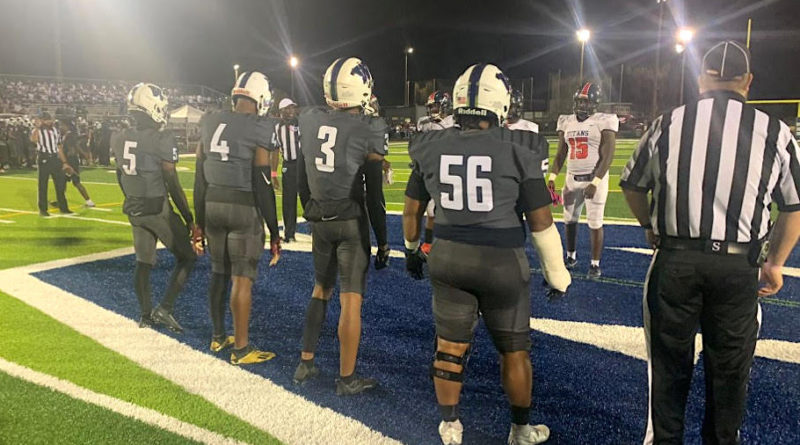 TAMPA, Fla.- In a battle of unbeatens, with a district title on the line, Tampa Bay Tech scored 21 unanswered points to beat Wharton 21-12 to win the District 7A-10 title Friday night at Wildcat Stadium.

The game was billed as a battle of defensive powers as the Wharton Wildcats had allowed just six points per game, while the Titans came in allowing only 13 points per game. And it was the Titans’ defense that prevailed.

“First off I wanna give credit to our defensive line as they worked their tails off,” Tampa Bay Tech head coach Jayson Roberts said after the game. “Our defense has carried us all year and we still have a long way to go to where we want to end up.”

Senior quarterback Carson Mohler put Wharton on the board first, connecting on a 55-yard touchdown pass to sophomore running back Arkese Parks to give the host Wildcats a 6-0 lead in the first quarter.

Later in the opening quarter, Wharton senior Jason Cornwall returned a punt 70 yards to the house, giving the Wildcats a 12-0 lead. The Wildcats’ defense – led by sophomore linebacker Booker Pickett, the older brother of Carrollwood Day freshman sensation defensive back DJ Pickett – held the Titans to just 16 total yards through the opening quarter.

The Titans finally got rolling in the second quarter when junior quarterback Xavione Washington fired an 80-yard strike to senior wide receiver Brandon Bethune that cut their deficit to 12-7.

“We were not worried at all,” Tampa Bay Tech coach Roberts said. “We aren’t gonna quit when we’re behind.”

Later in the second quarter, Mohler seemed to re-aggravate his “nagging” shoulder, according to head coach Mike Williams, and did not return. Sophomore Rickeem Parks took over at quarterback for the Wildcats.

The Titans took their first lead of the game in the third quarter on an 11-yard touchdown pass from Washington to senior wide receiver and Iowa State commit Gregory Gaines. The score followed a turnover and gave the Titans a14-12 lead.

Early in the fourth quarter, Gaines scored his second touchdown of the night on a 13-yard reception from Washington – his third TD pass of the game – that pushed the Titans lead to 21-12.