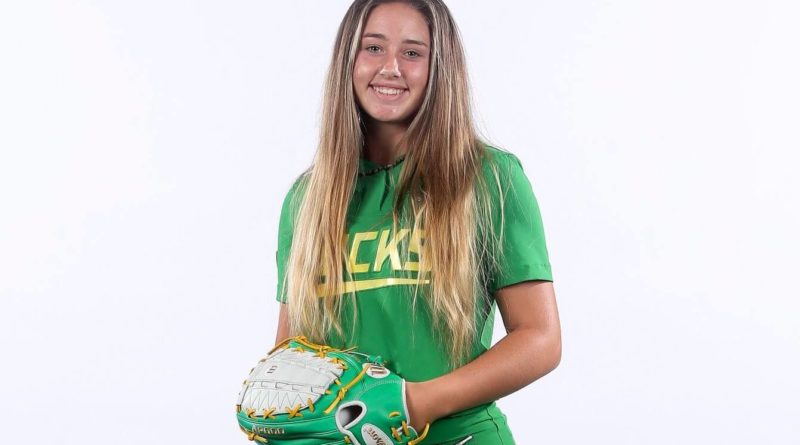 Several Inland Empire high school softball pitchers were off to excellent starts before the 2020 season was canceled, and they deserve to be recognized.

Based primarily on 2020 statistics and strength of schedule, these were the 50 best pitchers in IE softball in 2020. While many star pitchers are also premier hitters and position players, this list reflects only what they accomplished on the mound.

To submit a photo or nominate a player who isn’t on the list, please email lance@wpsblivest.wpengine.com. Players who were injured or ineligible for the start of the season can be nominated.

Alcantara was a key member of one of the area’s best pitching rotations. She was 2-0 with a 2.86 ERA in 22 innings despite facing the likes of Crescenta Valley, Los Alamitos, and Yucaipa.

Argomaniz had a 2.96 ERA in five appearances for one of the better teams in the Inland Empire.

In nine appearances as a freshman, Barrows had a 2.50 ERA. She recorded 40 strikeouts in 36.1 innings.

Another one of several remarkable freshman pitchers in the Inland Empire, Brandl pitched in 11 of Rancho’s 14 games. Three of her nine starts were complete games and she racked up 62 Ks in 50 innings.

Bruce had a 2.90 ERA and 34 Ks in 31.1 innings across in six appearances. That came exclusively against great or elite teams such as Norco, Temecula Valley, Yucaipa, and Mater Dei.

Bustamante is committed to pitch at LMU.

Calderas was all-division in 2019 as a freshman, and already racked up 54 Ks in 2020 before the season was canceled.

Cardenas was 4-1 with a 1.89 ERA pitching in six of Azusa’s seven games. She totaled 36 strikeouts in 33.1 innings and held opposing hitters to a .177 batting average.

Carrizosa’s work in 2019 included a zero-earned run gem against Citrus Valley, and she is committed to Coppin State.

Castillo pitched in all but one game for the 10-3 Eagles, going 10-2. In 12 starts, she threw eight complete games, five complete game shutouts, and two no-hitters–one of which was a perfect game. She had 60 strikeouts and a 2.03 ERA in 51.2 total innings.

Factoring in team success and strength of schedule, Coe was one of the best pitchers in the Southern Section in 2020. In 14 appearances, she went 10-2 and logged over 80 innings with a 2.61 ERA. And Coe had 13-3 Yucaipa poised to compete for a section and state title.

Corona was a major force behind 8-2 Oak Park’s exceptional start to the season as a freshman. Appearing in nine of their 10 games, she had a 2.54 ERA, an opposing batting average of .183, and 39 strikeouts in 30.1 innings.

Cowley and 11-3 Upland were off to a great start in her sophomore year after a standout freshman campaign.

Emmeliz was dominant through Victory Valley’s hot start in 2020. No one else in the Southern Section had an ERA as low as 0.39 through 36 innings, and she racked up 54 strikeouts (1.5 per inning) in her six appearances.

Fazzini pitched in all 13 games as a freshman, and held a 3.34 ERA in over 50 innings of work against big-time competition.

One of the main catalysts of Don Lugo’s excellent start to 2020, Garcia pitched in all eight games and finished all six of her starts. She had a 6-2 record with a 1.40 ERA. Garcia totaled 94 strikeouts in 50 innings and had an excellent opposing batting average of .151.

Haendiges is committed to Oregon State and already had a one-hit shutout against Redlands under her belt before the season was cut short.

Before the season got canceled, Hansen had been one of the top pitchers in the state. Her work included a two-hitter with 17 strikeouts against Glendora.

One of the themes of this list is freshman who are already pitching at an elite level for big-time programs. In a short sample size (19.1 innings), that definitely applies to Hernandez. In five games against Saugus, Salpointe Catholic (Arizona), Upland, Claremont, and nationally top-ranked Los Alamitos, Hernandez is 2-1 with a 2.53 ERA.

One of the top pitchers in the Southern Section, Hooks was off to another strong season in 2020 despite one of the hardest schedules in the country. She was 5-3 in nine games with a 2.53 ERA despite having to face the likes of Norco, Crescenta Valley, Los Alamitos, and Yucaipa (twice).

Hubbard is one of two Titans to make this list despite under 15 innings in 2020. Neither gave up a single run–Grand Terrace didn’t allow one run in four games in 2020.

Leavitt appeared in 10 of Ayala’s 12 games in their brutal preseason schedule and still finished with outstanding numbers. In 55.1 innings, she went 5-3 with a 1.77 ERA, recorded 78 Ks, threw seven complete games, and held opposing hitters below .200 batting.

Lennon only pitched 16 innings before her senior season was cut short, but she was lights-out in three starts. That included holding formidable Clovis to two earned runs in seven innings. She finished with a 1.31 ERA, two complete games, and an opposing batting average of .182.

The Rams were off to a 8-1 start in 2020, and Lopez was the only pitcher to ever take the mound for them–every game was a complete game.

More staggering numbers: five shutouts, three total no-hitters, and a perfect game; an ERA of 0.56; 106 Ks in 50 innings, striking out more than half of her batters faced; and an unreal opposing batting average of 0.078.

Palm Desert (9-3) was formidable in 2020, and Lopez pitched in every game but one. In 10 starts she recorded three complete game shutouts, struck out 68 hitters in 56 innings, and maintained a 1.75 ERA.

Magana went 2-0 in six appearances with a 2.00 ERA. She recently signed with College of the Desert.

Chino Hills (9-2) looked like one of the best teams in the Southern Section through 11 games, and Mangel pitched in all but one of them. She had a 7-1 record with a 1.82 ERA in 50 innings of work.

Martinez was in the circle for seven games in the Mighty Arabs’ tremendous start to the season. Six of her seven starts were complete games, including a shutout, and she struck out 42 hitters in 37.2 innings.

One of a few elite freshman pitching prospects in the Inland Empire, Miramontez was 6-0 with a 0.93 ERA in seven appearances for the Mighty Arabs. All six decisions were complete games, four of them were shutouts, and in the other appearance she got a save.

One of three Citrus Valley pitchers on this list, Nadeau threw 21 innings in four games with an ERA of 1.33.

Yet another Blackhawk on this list, the numbers say that Noda is one of the very best freshman pitchers in the country. While the sample size is small (20.1 innings), her ERA was only 0.34, and opposing batters only hit .141.

Citrus Valley has not one but two of the best freshman pitchers in the country. Petty was 7-1 in 10 appearances for the Blackhawks and had a 0.57 ERA in 36.1 innings.

Pieson already piled up a strong body of work in Patriot’s nice 9-4 start before the season was canceled. She pitched in all but one match with nine complete games, including a perfect game and two other no-hitters, with a record of 8-4 and a 2.52 ERA. In 66.2 innings, she totaled a ridiculous 132 strikeouts and had an elite opposing batting average of .105. The LHP will be in the circle for Mt. SAC next year.

Sharing the circle with star junior Kendall Mangel, Rosales only got 13 innings of work in before her freshman year was cut short. But she was excellent in three appearances against good teams, finishing 2-0 with a 1.62 ERA.

An all-division performer as a junior, Serrata pitched in 12 of Sultana’s 14 games as a senior. Despite Sultana’s brutal schedule, Serrata had an ERA of 1.21 in 2020 and held hitters to .187 batting. In 63.2 innings she recorded 73 strikeouts.

When factoring in her workload and formidable competition, Soliz made a serious case for being the best pitcher in California in 2020. Alta Loma was off to a formidable 11-2 start with Soliz appearing in all 13 games, owning a 9-2 record. In a massive 76.1 innings, she had an ERA of just 0.46 and 94 strikeouts.

Despite a very challenging schedule, Redlands was off to an 8-6 start in 2020 with Tath-Slezak leading the way. She was 8-4 in 12 appearances with 76.2 innings already under her belt, and still kept an ERA of 1.55 and an opposing batting average of .188.

One of the section’s top freshman pitchers, Taylor was thrown into the IE gauntlet in her first high school season and came out with a 2.79 ERA. In 10 games, she was 3-1 with a save, recorded 53 Ks in 37.2 innings, and held opponents to under .200 batting.

A reigning all-division honoree, Tinoco pitched 24 innings in five games during the 6-2 Ravens’ strong start to the year. She had a 1.75 ERA, 32 strikeouts, an outstanding opposing batting average of just .129, and an opposing OBP of .190.

Ulloa appeared in seven of the Knights’ nine games and finished with a 1.14 ERA.

Vargas only had three appearances before the season was shortened, but she didn’t give up a single run. Last season she was one of the top pitchers in SoCal as well.

One of the top-ranked pitchers in the country, Willis was off to another dominant start for 11-1 Norco in 2020.

Zepeda went 5-1 in nine appearances, including five complete games and a shutout in six starts. She finished with 48 Ks and a 3.33 ERA in 48.1 innings.

These are players we missed who belonged in the initial post.

Serna was off to another strong start in 2020 after tossing over 50 innings with a 1.15 ERA as a freshman last year.

Bentley had a 2.46 ERA in 37 innings during Centennial’s hot start, pitching in eight of nine games. Outside of one rough outing against one of the better teams in the country in Yucaipa, she had a 0.64 ERA in 32.2 innings against the likes of Murrieta Mesa, Temecula Valley, and more strong teams.