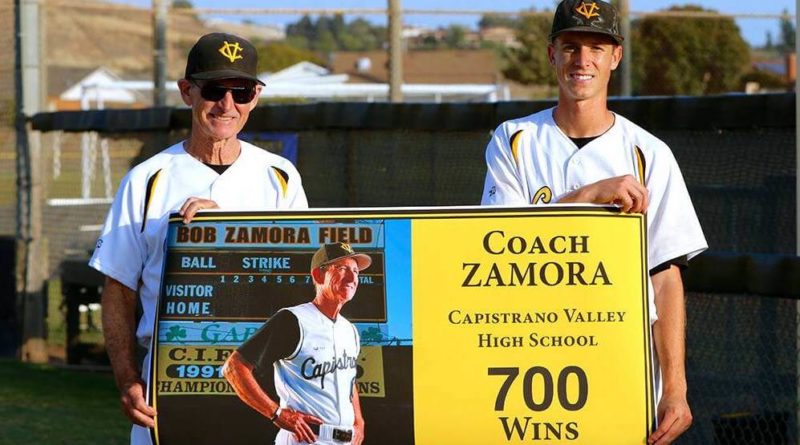 We took a look back through the archives to see which CIF Southern Section baseball teams have won the most all-time section titles, dating back to 1914. The all-time leader in CIFSS section championships, with 16, might surprise you.

We found 23 teams that had won at least four CIFSS baseball championships. Here’s a look at those programs.

Los Angeles Lutheran won three titles in the 1960s and another in 1973. Later on, the school merged with First Lutheran of San Fernando to become Concordia Senior High School. However, they closed down after the 2015-2016 school year.

The Lancers three-peated from 1998-2000 and won again 2002. Jim Thompson was head coach for the first title, Aaron Marcarelli for the second two, and Dave Maddox for the last one.

SLO High is no longer in the Southern Section, but they’re still in the record books. After Jim Thompson won it all in 1998 with Grace Brethren, he headed to San Luis Obispo and won a ring in 2000. Before that, the Tigers went back-to-back in 1958-59 under John Dodge behind the pitching of future American League Cy Young winner Jim Lonborg. They also won in 1990 under Dale Overland.

As of 1950, the Bruins were one of only three teams with three Southern Section titles. They won in 1940 under Fred Johnson, and in 1947 and 1950 under Clifford Meyer. Fifty-seven years later they added number four, winning at the Division 1 level under Andy Hall.

The Braves won three titles in the 1970s under Dan Bodary, and then won number four in 1993 with Bodary still at the helm. He continued as Lompoc’s head coach well into the 2000s.

From 1991-1994, the Thunderbirds nearly four-peated under Jeff Stout, coming up short only in 1992. Yucaipa won another recently at the Division 2 level under Ralph Grajeda.

Rio Mesa won their first title in 1980 with Zeke Jaquez, who left after that season. Pat Machado picked up where he left off, as the Spartans won championships in 1981, 1985, and 1986 with him in charge.

All five of San Marino’s titles came under Mickey McNamee, who went down as one of the winningest baseball coaches in SoCal history after 44 seasons as a head coach. They won in 1977, 1984, and thrice more in the ’90s.

One of the first powerhouse baseball programs in Southern Section history, Fullerton won it all in 1919 under L.O. Culp and went back-to-back in 1926-27 under Stewart Smith.

Santa Maria was one of numerous programs from their area to realign to the CIF Central Section a couple years ago to reduce travel time across SoCal. Before that, they won five total baseball championships in the CIFSS, starting in 1933 under Kit Carlson. The Saints also won rings in 1950 under Len Porterfield, 1954 and 1957 under Don Wilson, and 2017 under Rick Herbert.

The Rams won their first chips in 1967 and 1969 under Bob Myers, who later became a legendary Long Beach City College coach and is a member of the Long Beach Baseball & Softball Hall of Fame. They won three more in 1983, 1991, and 1992 under Dan Peters, with two more finals appearances coming in between those last titles.

Fillmore won four titles with Tom Ecklund, three-peating from 1975-77 and winning again in 1988. The Flashes got back on the board in 2018 under current head coach Matt Suttle.

The Lancers won their first title in 1962 under Walter Boyd. They won two more with John Herbold in 1970 and 1976, and another two with Walter “Spud” O’Neil in 1987 and 2006. Notably, every single Lakewood title came at the top division at its time.

After taking over in 1984, O’Neil is still the head coach, and Lakewood recently renamed their field after him. O’Neil had to take some time off in 2017 when he was fighting a multitude of health issues, but he’s going strong with no plans of stopping.

One more fun fact: current Southern Section commissioner Rob Wigod was his assistant for 14 years at Lakewood and actually proposed to his wife, Kelly, on what is now “Spud O’Neil Baseball Field.”

Linfield rattled off six titles in the 1990s, marking one of the top dynasties in CIFSS baseball history. They won it all in 1991 and pulled off an ultra-rare four-peat from 1993-1996 all under Al Carris. They won again in 1998 under John Martin.

All seven of Capo’s titles came during the Bob Zamora era. The first came in 1983, and the last came in 2018. Zamora had been hinting that he’d retire after the 2018 season, and he got to go out on a championship season. And Zamora got to stay on as an assistant coach and first base coach, plus retain his beloved role of handling field maintenance (on what is now “Bob Zamora Field”).

That gives Zamora six titles, third in CIFSS history, and most in Orange County history. Zamora was out for their 1987 season and Capistrano Valley struggled out of the gate under assistant coach/temporary head coach Craig Anderson, but they ended up winning it all that year as well.

If you want to talk about prolonged greatness, what former El Segundo head coach John Stevenson did was unparalleled. All seven of the program’s titles came with Stevenson as head coach, even though their title seasons came scattered across the span of over 40 seasons, from 1965 to 2005.

All in all, Stevenson was El Segundo’s coach for 50 seasons, and finished his career with 1,059 victories – the most in California history. And that’s against only 419 losses. Additionally, he’s one of only two coaches in CIFSS history with seven championships.

Perhaps you were expecting to see someone in, you know, the Southern Section? But San Diego High School won a whopping 16 CIFSS championships in under 50 seasons before the San Diego Section was founded in 1960.

It will likely be decades before the Cavers relinquish their record of baseball championships in a section they haven’t even been in for the past 60 years. As of now, Bishop Amat is the only program with half as many CIFSS baseball titles.

Making it even more impressive is that during the Cavers’ title runs, there was only one division within the Southern Section. They were the best out of not only all the teams currently constituting the CIFSS and the CIFSDS, but also everyone now in the L.A. City Section up until 1935, many schools now in the Central Section, and even some schools in Arizona and Nevada.

San Diego won rings with five different head coaches, but Mike Morrow was in charge for 10 of them.

Other teams that have won at least one CIFSS baseball championship: