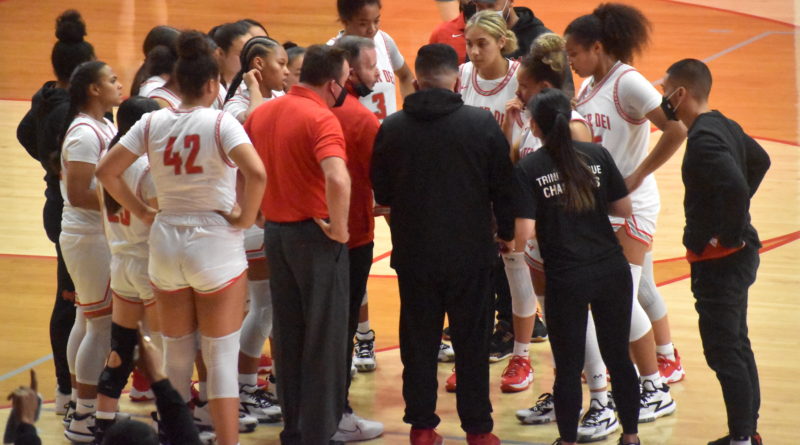 Lani White and Caia Elisaldez combined for 49 points as the Monarchs upped their winning streak to four games against one of their main rivals. Here are five takeaways from the game:

Since it was her first game back from a spell that included and eye injury and COVID-19, Lani White came off the bench in this one.

“Lani was very active. She played very well for us tonight,” said Mater Dei head coach Kevin Kiernan. “She’s still only had one practice, so I had her come in off the bench, but I couldn’t take her out.”

He never did again for the rest of the game, and she would finish with a career-high 27 points.

ELISALDEZ STUFFS THE STAT SHEET TOO

Caia Elisaldez went onto triple-double watch and even quadruple-double watch early on in this one, racking up five steals in the first quarter and seven before halftime. She didn’t quite push a triple-double or anything, but her 22 points and nine steals, in addition to her usual handful of rebounds and assists, were crucial.

After a 19-19 first quarter, Mater Dei started to gain momentum in the second quarter thanks to its ability to draw fouls, and a key defensive adjustment.

Utah Valley commit Kaylee Byon, who scored 10 points in the first quarter and was coming off a 30-point game, picked up her fourth foul roughly a minute into the third quarter.

“We played a good (first) half. But foul trouble, her having to sit, that really hurt us. They had to double her at every point and it left our other kids open… I did feel the foul trouble really was the difference today,” said Rosary Academy head coach Richard Yoon.

The foul trouble didn’t stop with Byon, and Yoon said having multiple starters with early fouls made it hard for the team as a whole to play as aggressive as usual. He also noted that despite the loss, he was “happy [they] came out swinging.”

In addition to the foul situation, Mater Dei’s defensive picked up when it stopped trapping Byon in itspress after the first quarter, per head coach Kevin Kiernan. The Monarchs kept up an aggressive enough press to force a lot of turnovers, but it stopped resulting in open threes for Clarke and the other Royals once they stopped trapping. And despite shooting the ball very well for most of the night, Rosary’s disadvantage in field goal attempts doomed them.

All that said, Rosary not only shot the heck out of the ball, but also had some very promising stretches of offensive execution.

Last season, Mater Dei repeatedly forcing the ball out of Byon’s hands would have often collapsed the Royals’ offensive flow. In this game, Rosary’s ability to get the ball through the press to an open shooter crisply and succinctly led to 12 made threes. Yoon

MONARCHS REMAIN NO. 1 IN LEAGUE AND COUNTY

As is often the case, the Mater Dei/Rosary Academy matchup is likely worth both bragging rights as the top team in Orange County and a Trinity League title. Having also defeated Orange Lutheran so far in league play, the Monarchs are in strong position to continue their reign over both the league and the county.

“Mater Dei is phenomenal,” said Yoon. “They should be number one in the county, they proved it tonight.”