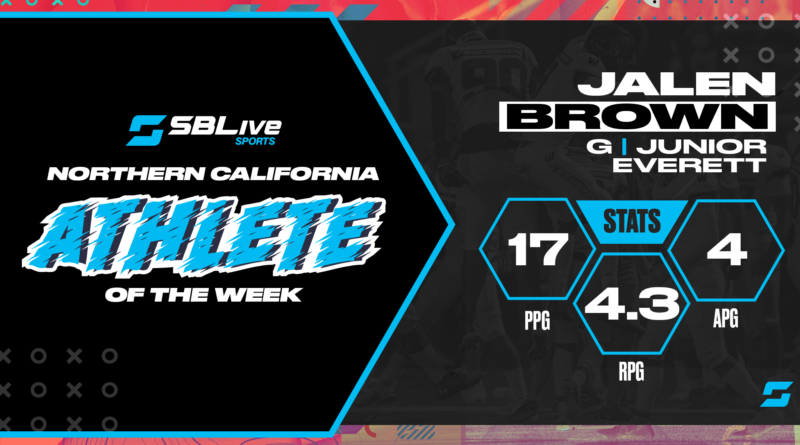 Brown received 63.76% of the vote, beating out Burbank’s Isaiah Griffin who finished second with 23.41%. There were over 16,000 votes tallied this week!

Maxie led the Mariners to a second-place finish in the Diamond Division of the West Coast Jamboree averaging 18 points, 7.5 rebounds, and 3.5 steals per game in their first two games.

Ladine led the Panthers to a title at the Saint Francis Holiday Tournament averaging 18.7 points, 12.7 rebounds, six assists, and 2.7 steals per game.

Butler led the Warriors to third place in the WCJ Diamond Division with a 15-point double-double against Alemany in the opener and a 29-point, 14-rebound night on 13-18 shooting in the bronze medal game.

In the Spartans’ lone game last week, Dumlao scored a career-high 23 points on 8-16 shooting (6-13 from three) to go with two assists and three steals in a 59-27 rout of Hercules.

Watkins guided the Wildcats to a second-place finish in the Pearl Division of the West Coast Jamboree averaging team-highs of 11 points and 14.7 rebounds per game to go with seven steals and eight deflections on the week.

Wright led the Mustangs to an Onyx Division title at the WCJ, posting 17 points eight rebounds, three steals, and six deflections on 6-11 shooting in their first win, and 20 points, five rebounds, six steals, and 11 deflections in their second win.

Yella helped lead the Eagles to a title at the Saxon Classic averaging 17.3 points, four rebounds, 2.7 assists, and three steals a game.

Braccia helped lead the Gators to the finals and a near-championship at the Cactus Jam averaging 17 points, six rebounds, 2.7 assists, and 2.3 steals per game on 55% EFG.

Williams helped lead the Wildcats to a title at the Damian Lillard Classic averaging 15 points, 7.3 rebounds, 2.3 assists, and 1.7 steals per game on 62.1% shooting. Te’Shawn Gamble had a big week as well.