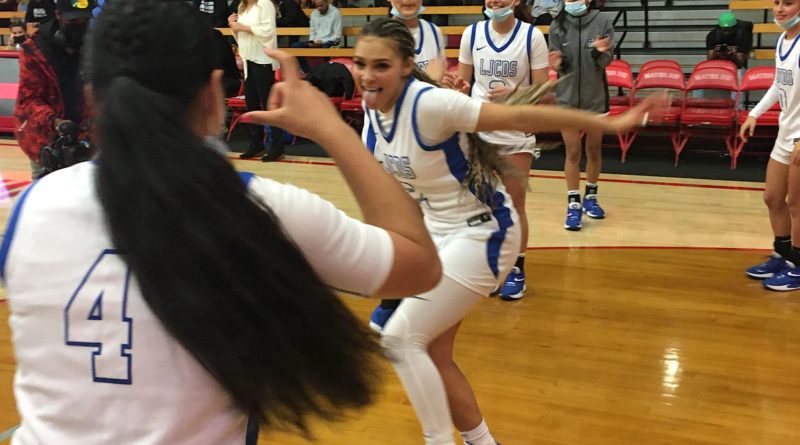 Led by the heroics of F Shanna Brown, the Wolverines avenged a 24-point loss from the beginning of the season to defeat Esperanza 52-49. Brown dropped 28 points and 21 rebounds for Aliso. Aryanna Hudson finished with 10 points and five assists, and Katie Dunakin added six points and 10 rebounds.

The Huskies showed the poise of a reigning champion in a game of punches and counterpunches to defeat Mission Hills 66-61. Centennial finished the second quarter on a run to lead 37-24 at halftime, but Mission Hills won the third quarter 19-9, including an 11-0 run, to cut the deficit to three going into the final frame. Still, the Huskies retook control of the game and never relinquished the lead, and Londynn Jones’ 27 points proved to be insurmountable for the Grizzlies.

Speaking of reigning section champions, Cathedral Catholic put on an outstanding show of ball movement and shot-making in a 37-point rout of Ontario Christian. 5-star UConn commit Ice Brady absolutely dominated, putting up 31 points and 24 rebounds. Izzy Navarro flirted with a triple-double, finishing with 11 points, 11 rebounds, and eight assists. Gizmo Navarro scored 15 points as well, and Taryn Johnson also finished in double-figures. The Dons only led by one possession after the first quarter, but they finished the game on a 66-31 run.

Despite the challenging loss on an uncharacteristically tough shooting night, the previously-unbeaten Knights played Cathedral close in the first quarter and proved that they belonged amongst the big-name programs. Shayla Gilmer put up 15 points and 10 rebounds, and Chloe Briggs added 13 points.

Mater Dei cruised to a 75-40 win against Sage Hill on Saturday in an entertaining offensive showcase as host of the Matt Denning Nike Hoops Classic.

Emily Shaw erupted for 19 points on 7-10 shooting (5-7 from three) in 14 minutes off the bench, and Caia Elisaldez finished with 13 points, four rebounds, and team-highs of five assists and four steals. Jenessa Cotton posted a double-double as well, and five more Monarchs finished with at least five points. MD shot 55.6% from both the field and from deep, and 17 of its 30 made field goals were assisted.

Emily Eadie played all 32 minutes for the Lightning and led them with 19 points (3-4 from three), nine rebounds, and two assists (tied). Kat RIgheimer added 12 points and seven boards for Sage Hill. Like Ontario Christian earlier, Sage took a fairly lopsided beating, but still looked like it belongs on the big stage.

Check out the complete highlight video:

In the lone boys game of the day, Mater Dei came out strong and maintained a comfortable double-digit from wire to wire to defeat San Juan Hills 72-59. F Zack Davidson was unstoppable, leading the game in points (25 on 9-14 shooting), rebounds (eight), blocks (one – tied), and steals (three – tied). Freshman big man Tee Bartlett added 15 points to combine for 40 out of the Monarchs’ imposing starting frontcourt. Mater Dei shot did most of its damage in the paint, and shot 27-48 (56.3%) from the field.

San Juan Hills was never really in the game, but was able to play the Monarchs very closely for most of the stretches therein. Jacob Simon (19 points on 7-10 shooting) and Mark Reichner (18 points) led SJH in scoring, and John McFadden added nine points, seven rebounds, four assists, a block, and a steal. Despite playing at a massive size disadvantage, San Juan Hills was able to nearly neutralize Mater Dei on the boards (26-25) while still forcing a 4-17 shooting night from three. Still, no amount of packing the paint could keep the Monarchs from scoring in the lane.