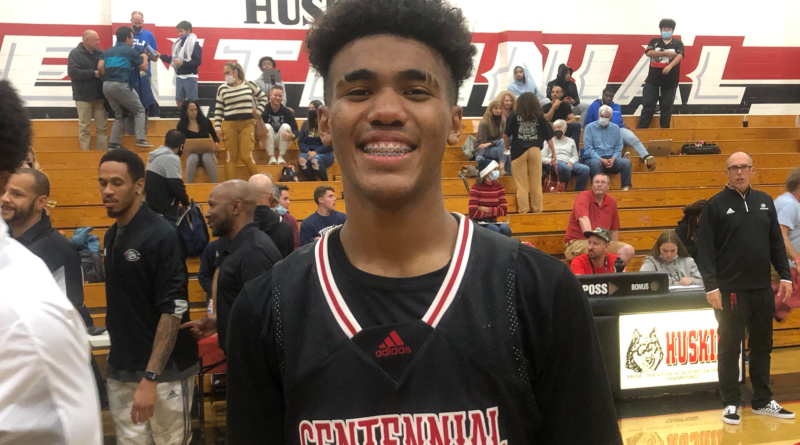 The most dominant and explosive playmakers throughout CIF Southern Section high school boys basketball are hitting their strides as teams across the Section look to lock up postseason berths in the coming weeks.

The brightest stars from every corner of the Section have begun making their cases on the court for both Section Player of the Year honors and SBLive’s California High School Boys Basketball Player of the Year award, presented annually to the most outstanding player in the state.

Here are 16 players from the Southern Section who have separated themselves from the pack during the first two months of the season.

Players are listed in alphabetical order.

TOP CANDIDATES FOR CIFSS PLAYER OF THE YEAR

When looking at player of the year candidates, the ideal winner will of course have talent, but playoff success is also a must. St. Bernard will most likely compete in the Division 1 playoffs in the Southern Section next month and Carr is the type of player who could lead the Vikings to a championship. The junior guard was named the MVP of the Westchester tournament earlier this season after scoring 30 points in the title game, a 64-56 win over Bishop Montgomery.

Three of the five Del Rey League teams have a Player of the Year candidate on their roster (Serra and Bishop Montgomery are the others), so winning the league could also play a part in determining the the winner for our Player of the Year honor.

Dent has separated himself as one of the best players in the state. The New Mexico signee was the best player at the Classic at Damien for stretches and has been a standout performer for the Huskies for two years now. Last season, Dent was named the Southern Section Open Division Player of the Year. If Corona Centennial repeats as Open Division champions in 2022, Dent will most likely take home our Player of the Year award although junior teammates Devin Williams and Jared McCain would also have to be considered.

Serra will be a Division 2-AA playoff team and Dent-Smith has the talent to push his Cavaliers squad to a championship. Dent-Smith was named the MVP of Serra’s tournament earlier this year and he also scored a team high 28 points in a 79-70 win over Notre Dame on Dec. 9.

Two players have separated themselves as Section and State Player of the Year candidates on the Harvard-Westlake roster so far this season: Dunlap and senior Cameron Thrower (listed below). Dunlap is a fantastic athlete and skilled shooter. For one of the Wolverines to win the Player of the Year honor, it will most likely take Harvard-Westlake knocking off one of Corona Centennial or Sierra Canyon to qualify for the Southern Section Open Division championship game. If Dunlap leads the Wolverines to a postseason win over one of those schools, he’ll become a frontrunner.

With all of the talent on the Sierra Canyon roster, there may be a few Section and State Player of the Year candidates on the Trailblazers team come the end of the season. Even though Sierra Canyon didn’t win a Section or regional title a year ago, Amari Bailey won our State Player of the Year honor as a junior. Coming into this season, Bailey was the favorite to repeat as our winner, but he’s only played one game so far this year due to a lower body injury. If Bailey misses a lot more time, sophomore Isaiah Elohim becomes the next best candidate from the loaded Trailblazers roster.

Elohim is young as a sophomore and he was a sit out period transfer from Heritage Christian, so he’s only played one game this season as well, but he’s healthy and a transcendent talent. If Sierra Canyon wins the Open Division championship with Bailey in and out of the lineup, it will most likely be Elohim who picks up the scoring load. In 2020, Sierra Canyon senior Ziaire Williams was named the LA Times Player of the Year despite being a sit out period transfer. Elohim could have a similar type of season. A third Trailblazer to monitor for Player of the Year is senior guard Ramel Lloyd, a Nebraska signee.

Los Altos is another Division 2-AA team with championship aspirations and Gardner has the talent required to be considered for Player of the Year. The junior center has a brilliant offensive game for a seven-footer. He has strong handles and can step out and shoot threes in addition to performing the usual duties required of a center. Gardner has five triple doubles in 13 games so far this year.

Gealer led Rolling Hills Prep to a Division 2-AA Section title last season and in 2022 the Huskies are right on the Open Division/Division 1 playoff line. Gealer is a sure-handed point guard who can score at all three levels. He plays incredibly smart basketball and is a tremendous team leader as well. Qualifying for the Open Division playoffs would be an overachievement for this year’s Huskies team, which would lead to Gealer getting legitimate Section and State Player of the Year consideration. Winning a Division 1 title if the Huskies are outside of the top eight would be another massive resume booster. So far this season, Gealer has consistently led Rolling Hills Prep in scoring averaging 15.7 points per game.

Coming into this season, Crean Lutheran was a fringe Open Division/Division 1 team but after 12 games and an 11-1 record, the Saints have positioned themselves as a clear Open Division squad. Miller, although only a sophomore, is the team’s best player and if he can lead Crean to a win or two in the Open Division playoffs, he’ll strongly be considered for Section and State Player of the Year.

Similarly to Harvard-Westlake, Notre Dame has two stars in Shtolzberg and junior Dusty Stromer who are both talented enough to both warrant Player of the Year looks. Shtolzberg scored 27 points in an 89-61 win over Campbell Hall earlier this season. Notre Dame will play in the Division 2-AA playoffs.

Smith, a Colorado signee, was named MVP of the St. John Bosco tournament earlier this season. He’s a strong scorer and great ball handler who put in a game high 26 points in Damien’s 64-56 loss to Riverside Poly last month at the Classic at Damien. If Damien goes on a run in the Southern Section Open Division playoffs, Smith will be one of the main reasons why.

Smith was named MVP of the Mission Prep Christmas Classic after leading the Knights to the tournament title. Bishop Montgomery could play its way into the Open Division field in the Southern Section if they win the Del Rey League. As one of the team’s top players, along with fellow junior Xavier Edmonds, Smith will receive Player of the Year consideration if the Knights go on a deep playoff run.

Stephens shoots threes at a very high clip and has been one of the main factors driving Riverside Poly’s success in 2021-22 — the Bears are 16-1 and a Southern Section Open Division shoo-in. In the Classic at Damien, Stephens scored 23 points in Poly’s 64-56 win over Damien and 25 in a 78-77 win over West Ranch.

Stromer is an exceptional scorer. He put in 27 point in a loss against American Fork this season, 25 in a win over Long Beach Poly, 29 in a defeat to Serra and 29 in a win over Campbell Hall. Stromer’s scoring ability makes the junior a clear Player of the Year candidate. How far can he take Notre Dame in the Division 2-AA playoffs?

Thrower is the other top player for Harvard-Westlake, a team with Open Division title aspirations. The Penn commit hit five threes in a 78-40 win over a good Village Christian team this season. He’s instrumental to the Wolverines success.

A year after winning the CIF State Open Division regional championship, Etiwanda may be a Division 1 playoff team in the Southern Section this season, which would give the Eagles a clear chance at a CIF title. Webb, a New Mexico signee, is the Eagles top player. He showed that he has a complete offensive game in the Classic at Damien in addition to being a strong defender. At the Classic, Webb scored 26 points in a 65-57 loss to Owyhee, 15 in a 67-61 defeat against Corona Centennial and a team high 17 in Etiwanda’s 52-37 win over American Fork (Utah).

White possesses a strong all around game. He’s athletic, he can score, he plays defense and he’s a good teammate. Riverside Poly is one of the surprise teams of the season in the Southern Section so far — they’re going to qualify for the Open Division playoffs. White scored a team high 24 points in Poly’s 64-56 Platinum Division Classic at Damien semifinal win over Damien last month. The game showed that he’s a clear Player of the Year candidate.