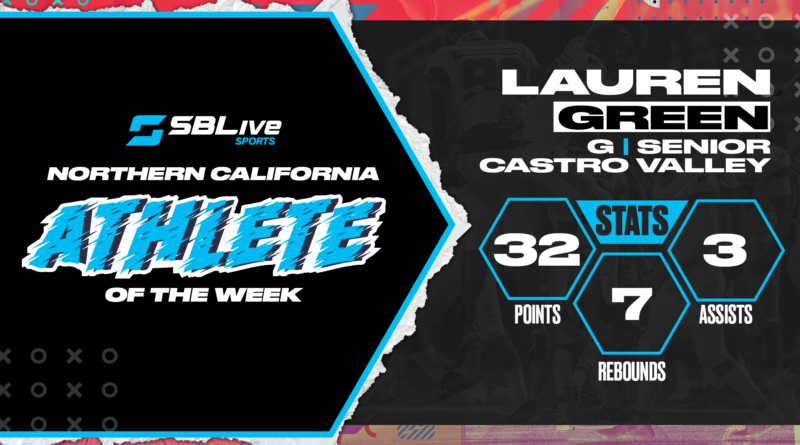 The senior exploded for 32 points on 10-18 shooting (5-6 3FG) plus seven rebounds, three assists, and four steals in the Trojans’ only game last week, a 61-53 win against Amador Valley.

Green received 54.32% of the vote, beating out El Camino (Sacramento)’s Kiku Parker who finished second with 43.47%.

Maxwell led the Grizzlies to four wins in four days averaging 21 PPG on 52% FG, plus 9.3 rebounds, three steals, and four blocks per game.

In the two games she played in last week, Muse led the Eagles to wins against Rocklin and Woodcreek averaging 21 points and 11 rebounds per game on 55% shooting.

In the Mustangs’ only game last week, a blowout of Irvington, Coleman stuffed the stat sheet with 20 points on 7-11 shooting, 13 rebounds, eight assists, and four steals.

Neal put up a 21-point, 17-board, 10-assist, five-steal triple-double last week in a 52-42 win over Santa Rosa. She finished with 16 points, eight rebounds, two assists, three steals, and three blocks in Rancho’s other game, a loss against San Marin.

Pollard erupted for 26 points on 9-15 shooting (8-10 from three) to lead the Pirates to a 20-point win against Liberty (Brentwood).

Butcher scored 22 points on 8-10 shooting (4-6 from three, EFG of 100%) to go with two assists, three steals, and two drawn chargers in a trouncing of Franklin (Elk Grove).

Bliss led Ponderosa to a 3-0 week averaging 19.3 points, 22.7 rebounds, and 8.3 blocks a game on 52% shooting. The Bruins also got huge weeks from Casen Chaney and Nick Von Zboray.

Hall scored 29 points in a 50-point blowout of Envision Academy.

Muhammad led the Bulldogs to a 3-0 week, capped off with 38 points on 15-24 shooting to go with six rebounds, three assists, and nine steals in an 81-73 win versus Alameda.

Playing in two of the Chargers’ three games last week, all of which were wins, Kuverji averaged 26.5 PPG on 69% shooting to go with 10.5 RPG, five APG, and seven deflections in the two games. Ethan Chang also had a big week for Leland.

Brown averaged 25 points, 5.5 rebounds, two assists, and 6.5 steals per game last week shooting 70% from the field in a pair of wins.