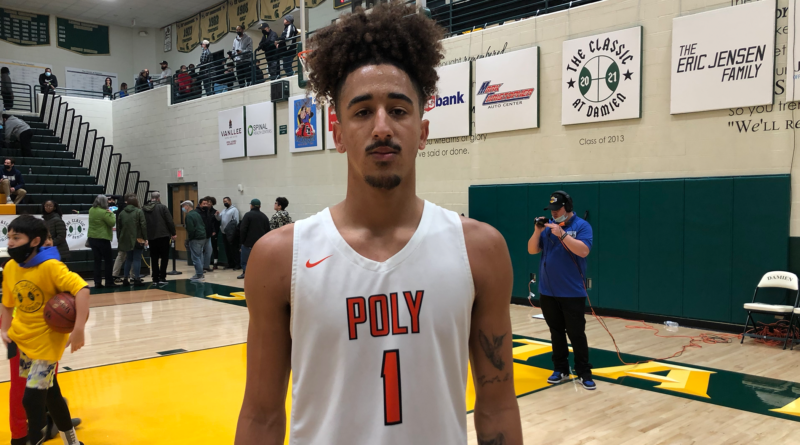 The annual Classic at Damien boys holiday basketball tournament wrapped up on Thursday night. Despite double-digit COVID-19 cancellations, games still took place all day from the campus of Damien High School. Both Riverside Poly (Platinum Division) and Long Beach Poly (Gold Division) were set to play championship games on Thursday night, but had to cancel due to COVID-19. Because Riverside Poly had to back out, Corona Centennial was named Platinum Division champion and Long Beach Poly was named Gold Division co-champion along with would be opponent Crean Lutheran.

Even with all of the COVID interruptions, enough basketball was played to name first, second and third All-Tournament teams. The honorees are listed below.

Dent was the best player in the tournament for stretches. The New Mexico commit scored 27 points in Corona Centennial’s 62-56 Platinum Division win over St. John Bosco and then 23 points in the Huskies’ 67-61 win over Etiwanda a day later. After the St. John Bosco victory, Corona Centennial head coach Josh Giles said of Dent: “I’ve had four guards play in the Pac-12 since I’ve been at Centennial, he may be the best one I’ve ever had.”

Gealer was already established as one of the top guards in California high school basketball before the Classic, but he somehow managed to improve his stock even more this week. Gealer scored 15 points in the Huskies’ 51-36 first round Gold Division win against Roosevelt, 17 points in their 50-43 second round win against Colony and then 19 in the Gold Division third place game, a 63-55 win over San Joaquin Memorial.

Campbell showed that he’s a national recruit this week. The sophomore already possesses a bevy of Division 1 moves on the offensive end and is a strong defender. Campbell averaged 26.7 points per game in Owyhee’s four games at the Classic. He was the main reason The Storm finished in third place in the Platinum Division.

White scored a team high 24 points in Poly’s 64-56 Platinum Division semifinal win over Damien. He impressed on both ends of the floor in the Classic. White’s best defensive play came in the Damien game when he emerged out of nowhere to meet a Spartan at the rim and block a lay up attempt with his fingertips. White provides valuable leadership to a Poly team that starts three freshmen as well.

Williams had a terrific tournament for the Platinum Division champions. He scored 16 points in the Huskies’ final game of the week, a 66-56 win over Crean Lutheran. Prior to that, he put in 20 points in Corona Centennial’s win over St. John Bosco. Unofficially, Williams led the tournament in blocks and dunks.

Payne and Etiwanda’s Quinton Webb were the two most athletic players in the Classic. Payne, a Colorado State commit, wowed the Damien High spectators with ambitious dunk attempts and consistent bursts of quickness that led to steals and buckets all four days. Payne scored 16 points in Owyhee’s 65-57 Platinum Division third place game win against Etiwanda. He was fantastic at both ends of the floor all tournament.

Stromer scored 23 points in a 76-63 victory over Rancho Christian and 22 in the Knights’ 70-57 win over Sheldon this week. On Day 1 of the Classic, Notre Dame lost 70-57 to American Fork (Utah), but Stromer scored 27 points. He did all of this without the Knights other star, Ben Shtolzberg, who missed the Classic with a shoulder injury.

Hunter was one of the top scorers in the Classic. The Fresno State commit put in over 20 points in each of San Joaquin Memorial’s three Gold Division winner’s bracket games. His tournament scoring high was 28 points in the Panthers’ 86-74 win over Los Altos.

Miller scored a team high 18 points in the final game of the Classic, a 66-56 loss to Platinum Division champion Corona Centennial. The sophomore was one of the top scorers all week as well. He put in 24 points in Crean’s 65-50 first round Gold Division win over Oak Park and 22 in their 63-49 win over Jesuit on Day 2.

Webb was one of the biggest stock risers of the Classic. Coming into the tournament, the scouting report on the New Mexico signee was that he’s an incredible athlete and very strong defender. Future Etiwanda opponents beware: Webb’s developed a very consistent jump shot now too. The senior hit multiple threes in Platinum Division defeats against Corona Centennial and Owyhee (Idaho). He scored 26 points in Thursday’s 65-57 loss to Owyhee, 15 in Wednesday’s 67-61 defeat against Corona Centennial and a team high 17 in Etiwanda’s 52-37 win over American Fork (Utah) on Tuesday. Webb’s offensive game has taken a huge step forward from where it was a season ago and it was on full display at the Classic.

Ruff is the lone freshman to make the list and probably could have made the first or second team if Long Beach Poly had played more than two games. In the Jackrabbits first game, Ruff scored nine straight fourth quarter points to lead Poly to a 70-67 win over Capistrano Valley Christian. He finished the game with 15 points. In Wednesday’s 64-63 Gold Division semifinal win over San Joaquin Memorial, Ruff scored 21 points.

Stephens can shoot threes at an extremely high level and his sharpshooting was one of the main reasons the Bears advanced to the Platinum Division championship game. Stephens scored 23 points in Wednesday’s 64-56 semifinal win over Damien. In Poly’s 78-77 win against West Ranch on Day 1, he scored 25 points.

In an otherwise very frustrating game for Damien, Smith kept the Spartans in their 64-56 Platinum Division semifinal loss to Riverside Poly by scoring a team high 24 points. He scored 19 points in Damien’s 80-57 win over Jesuit on Monday.

Davis is one of the more underrated California high school basketball players and his performance at Damien should warrant a few more college looks. He scored 18 points and grabbed 15 rebounds in Wednesday’s 64-63 Gold Division semifinal loss to Long Beach Poly. In SJM’s first game of the Classic, Davis led the Panthers with 22 points in a 64-56 win over Rancho Christian.

Similarly to Ruff, Los Altos only playing two games led to Gardner earning third team honors, but he could have been placed higher. The seven-footer scored 18 points to lead the Conquerors to a scrappy 47-44 opening round Gold Division win over Fountain Valley and then led all scorers with 33 points in Los Altos’ second round 86-74 loss to San Joaquin Memorial. Gardner also grabbed 10 rebounds in that game.