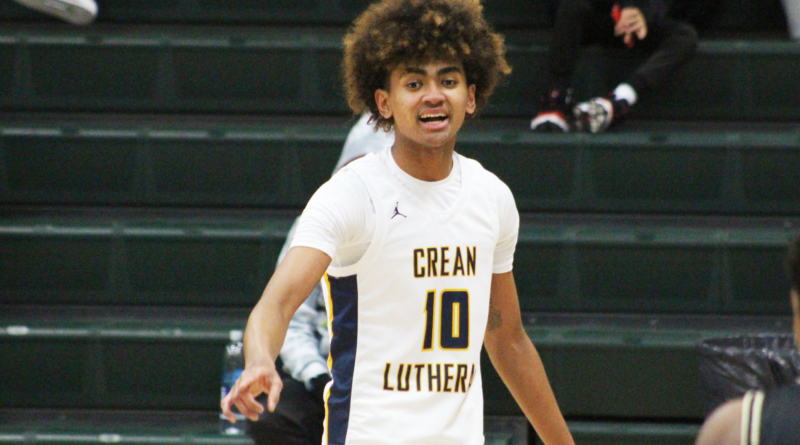 The Classic at Damien, known as the premier post-Christmas boys high school basketball tournament in the west, will tip off on Monday with over 70 teams (the number will be fluid due to COVID-19) competing across six divisions. Top teams will compete in the Platinum and Gold Divisions with the remainder of teams playing in the Diamond, Silver, Bronze and Green Division fields.

Follow along all day below for live updates from Day 1 of the Classic.

Etiwanda overcame a tough shooting night and halftime deficit to hold off Sheldon 53-50.

Sheldon kept the longer, more explosive Eagles from dominating in transition and feasting in the paint in the half-court. The Huskies led 27-23 at halftime, at which point Troy Crighton was the only double-digit scorer in the game with 10 points.

Etiwanda came out in the second half with a renewed focus on working the ball into the paint against the undersized Huskies, and a few paint scores from Quinton Webb forced Sheldon to switch to a zone. The Eagles never extended their lead past eight points, and after leading 48-41, Sheldon came roaring back to close the gap at 51-50. Sheldon had a chance to tie the game, and Etiwanda forced a tough shot by Marcellus Franklin and got the board to seal the game.

Crighton led all scorers with 17 points, and Jimmy Baker led Etiwanda with 14.

Etiwanda will face American Fork (Utah) in the winner’s bracket on Tuesday.

Colony only led 27-24 at the half but broke the game open in the second half to win 62-46 over Pacifica Christian in a first round Gold Division game. Minnesota commit Jaden Henley led all scorers in the game with 19 points. 12-0 Colony will play 11-0 Rolling Hills Prep in the winner’s bracket on Tuesday.

Damien dominated from wire to wire in an 80-57 win over Jesuit, which was missing 4-star SF Andrej Stojakovic and playing a division up.

RJ Smith set the tone with 10 first quarter points on a pair of contested threes and a pair of high-flying dunks. He outscored the Marauders himself in the frame, after which Damien led 22-9. The Spartans led 44-19 at halftime, and in addition to Smith’s 14 points, Spivey Word, Kaleb Smith, and Jimmy Oladokun had nine first-half points each.

Damien cruised in the second half as both teams emptied their benches. RJ Smith and Oladokun led all scorers with 19 points for the Spartans, which move to 15-0. Jayden Teat led Jesuit with 18.

In an epic first round Gold Division game, Los Altos hung on to beat Fountain Valley 47-44. Seven-foot junior Jazz Gardner scored 18 points to lead Los Altos. CJ Bellamy added 10. Fountain Valley had a chance to tie the game at the end but couldn’t get a shot off. Los Altos will play San Joaquin Memorial in the second round on Tuesday.

Corona Centennial showed why they’re one of the top teams in the country in their 89-28 win over Clovis North. At the half, the Huskies led 51-16. Sharpshooting junior Jared McCain led the Huskies with 21 points. Corona Centennial will play St. John Bosco in the winner’s bracket of the Platinum Division tomorrow. Since this was a crossover game, Clovis North advances to play in the winner’s bracket of the Diamond Division tomorrow.

In a game that came down to the last shot, Andrew Meadow missed a three at the buzzer and Riverside Poly hung on to beat West Ranch in their first round Platinum Division game 78-77. West Ranch sophomore James Evans scored two buckets at the rim to put the Wildcats up by one with under a minute left before Chance Stephens scored a layup with only seconds left putting Poly ahead for good. With .9 to go, Meadow had a good look on a straightaway three to win for West Ranch but it just missed.

After trailing 33-24 at the half, San Joaquin Memorial came out firing in the second half to win their first round Gold Division game over Rancho Christian 64-56. Junior Mike Davis scored 22 points in the win and senior Fresno State commit Jojo Hunter added 21 for the Panthers.

“The second half we played a lot harder and a lot smarter,” Hunter said. “We slowed down. In the first half we were taking bad shots and we were taking fast shots. We slowed it down, locked up and won the game.”

San Joaquin Memorial will play the winner of Los Altos and Fountain Valley in the winner’s bracket of the Gold Division on Tuesday.

“We’re not done yet,” Hunter said. “We’ve still got three more games upon us. We have to play hard and stay focused.”

San Gabriel Academy got on Fairfax from the jump and never took their foot off the gas in a 64-42 victory. SGA’s Ethan McCloskey led all scorers in the game with 23 points. Both teams will move on in their respective winner’s bracket because this was a crossover game (Gold for Fairfax and Silver for SGA).

Due to COVID-19 over 10 teams have had to drop out of the tournament so some teams whose first round opponents pulled out are playing crossover games between divisions. Both teams who are playing in these games will automatically advance because of the cancelations, so St. John Bosco (Platinum) and Murrieta Valley (Diamond) will both be in tomorrow’s winner’s bracket in their respective divisions.

In a game that was closer than the final score indicated, Crean Lutheran took down Oak Park 65-50 in a first round Gold Division game. Saints sophomore Vyctorius Miller scored a team high 24 points in the win. UC Santa Barbara bound senior Koat Keat added 16 points. Oak Park trailed 21-14 after one quarter with junior Isaiah Sherrard scoring all 14 Eagle points. At the half, Crean Lutheran led 33-29 and after three quarters the Saints’ lead was only two, 44-42. Miller and Keat combined for 19 points in the fourth to close out the game. Sherrard finished with a game high 26 points.

Crean Lutheran will play Jesuit in the second round on Tuesday.

“Our defense is a work in progress,” Huskies head coach Harvey Kitani said. “You’re going to have to be able to defend if you want to do anything, so we’ll just keep working.”

Rolling Hills Prep will take on the winner of Colony and Pacifica Christian in the next round on Tuesday.

Former Harvard-Westlake guard Liam Campbell scored 32 points in Owyhee’s 66-54 win over St. Bernard. The Storm closed the game on a 16-3 run. Owyhee will play Damien in the second round on Tuesday.

Late in the fourth quarter, Jackrabbits freshman Jovani Ruff scored nine consecutive points and then assisted on a three point shot by Daniel Hardy to give Long Beach Poly the lead for good in a tightly contested opening round Gold Division game against Capistrano Valley Christian. Ruff finished with 15 points.

“The whole first half and second half they had a guy face guarding me,” Ruff said. “That slowed me down, but when I saw we were down I was like I don’t want to lose this game. I was telling my teammates and the coaches were telling them, just curl off the screen, they can’t guard me.”

Ruff got poked in the eye late in the fourth and left the game with a large bandage over his eye.

Long Beach Poly will play Fairfax in the second round on Tuesday.